'Back To Form' Virat Kohli Sneers At Hardik Pandya After Smashing Him For Boundary; Watch

Virat Kohli scored 73 off 54 balls and put up a century partnership for the opening wicket with skipper Faf du Pless in the GT vs RCB IPL 2022 clash. 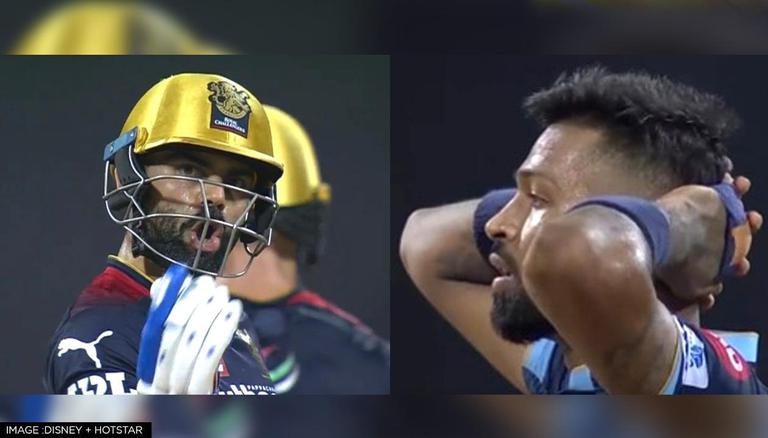 
Virat Kohli's form in IPL 2022 has been a cause of concern but the former RCB skipper roared back to form in the all-important clash against Gujarat Titans which helped his team stay in contention for a place in the IPL playoffs.

RCB's form through the IPL 2022 campaign was a stuttering one and the lack of runs from Virat Kohli's bat was another major problem that the team was tackling. The former India skipper though silenced his doubters with his match-winning knock.

Besides playing the match-winning knock, Virat Kohli was also in news for mocking Titans skipper Hardik Pandya during the run chase. The episode happened in the fourth over of the RCB innings. Virat Kohli got a boundary through the inside edge which went for a four which he celebrated.

In the very next delivery, Kohli moved to the leg side and hit Pandya towards the deep square leg. Rashid Khan who was fielding at the position made a mess of a chance to pick up Kohli's wicket as he tried to come in and catch the ball, but in the end, had to leap backwards for the catch. The ball didn’t stick to his hand and went for a four. Kohli was seen mocking Pandya with a gesture while the Titans skipper stood in shock.

Hardik Pandya won the toss and chose to bat first. However, the Titans lost Shubman Gill, courtesy of an excellent catch by Maxwell at slips. Matthew Wade was next to be dismissed in a controversial fashion as he was adjudged LBW by the on-field and TV umpires despite DRS replays showing a faint edge to the ball before it hit the pads.

Hardik Pandya then carried the bat scoring an unbeaten knock of 62 runs in 47 balls and contributions from Saha, Miller and Rashid took the team's total past the 160 run mark. Bangalore was never in trouble during the run chase with Virat Kohli back to his best scoring a half-century (73 off 54 balls) and also put up on a century partnership for the opening wicket with skipper Faf du Plessis. Maxwell provided the finishing touches to take Royal Challengers Bangalore home with eight balls to spare.