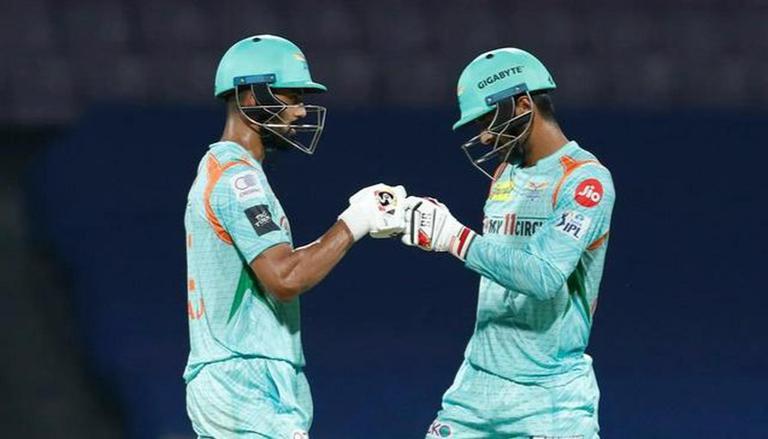 
Lucknow Super Giants were asked to bat first in match no. 12 of Indian Premier League 2022 on Monday after Sunrisers Hyderabad skipper Kane Williamson won the toss and opted to bowl first. LSG were off to a poor start as Washington Sundar dismissed LSG opener, Quinton de Kock, in the second over of the first innings, before Sundar returned and dismissed Evin Lewis in the fourth over. Adding on to LSG’s woes, Manish Pandey was dismissed by Romario Shepherd in the 5th over, which brought out all-rounder Deepak Hooda to the middle with KL Rahul hanging on at the other end.

With the team trailing at 27/3 inside five overs, Hooda and skipper Rahul contributed 87 runs in 62 balls for the fourth wicket stand and resurrected LSG’s innings. Hooda took 31 balls to reach his second half-century of the season and walked back to the pavilion after getting dismissed by Shepherd in the 16th over. Hooda’s knock comprised three fours and three sixes, as LSG recovered from the early hiccups with the skipper still out at the middle.

Rahul reached his half-century in the same over which saw Hooda’s dismissal as LSG found themselves at 120/4 in 16 overs. He walked out to the pavilion in the 19th over ad SRH pacer T Natarajan executed a perfect yorker. The Lucknow skipper decided to review the lbw decision, however, the third umpire confirmed the ball would have hit the wickets and Rahul had to walk back to the pavilion. The skipper struck six fours and one six during his knock and scored his first half-century of the ongoing season.

READ | IPL 2022: Under pressure after three losses, Ravindra Jadeja 'lucky' to have MS Dhoni by his side

It is pertinent to mention here that Rahul had got dismissed for a duck in the team’s opening game, while he made a comeback by scoring 40 runs off 26 balls in the previous match against Chennai Super Kings. Coming back to the match, LSG were reduced to 146/5 following Rahul’s dismissal and ended their innings at 169/7 courtesy of a thrilling finish to the innings by youngster Ayush Badoni and Jason Holder. Meanwhile, cricket fans on social media were overwhelmed by witnessing the LSG duo of Rahul and Hooda scoring half-centuries, as they revealed their thoughts on Twitter.

READ | 'Didn't have such a bad start in 2020': Ex-India opener anxious over CSK's poor IPL outing

Terrific pick by #LSG..helped in rescue of the team 2nd time in 3 games.