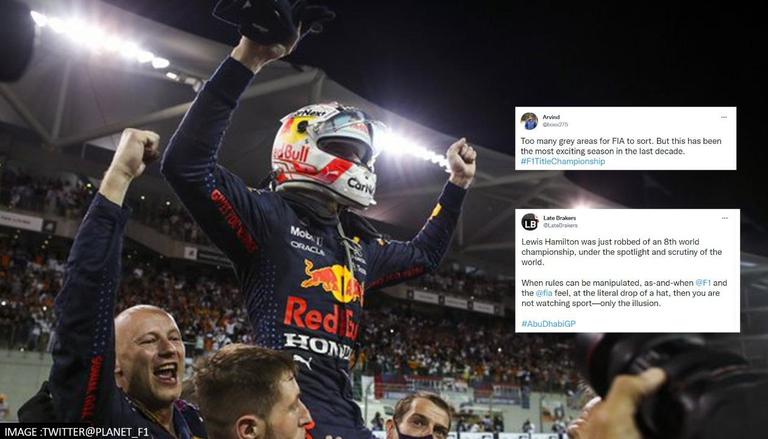 
Red Bull driver Max Verstappen won his first Formula One World Championship title after winning the Abu Dhabi Grand Prix, overtaking Lewis Hamilton in a dramatic and controversial final lap. With this, he became the first Dutchman to win the title and the second for Red Bull after Sebastian Vettel.

A stunning season by an extraordinary talent#HistoryMade #F1 @Max33Verstappen pic.twitter.com/FxT9W69xJe

Lewis Hamilton appeared to be heading for his record eighth crown after leading from the start but a late crash for Nicholas Latifi's Williams brought out the Safety Car. While there was no controversy about the safety car being brought out since there was a safety issue, what happened after was discussed for days to come. There seemed to be confusion with the race control as first they stated that they would not allow lapped cars to overtake, but sooner gave out a different statement and confirmed that lapped cars would be able to overtake. With lapped cars being allowed to overtake, Verstappen was right behind Hamilton on much fresher tyres, allowing him to pass the Brit easily.

Too many grey areas for FIA to sort. But this has been the most exciting season in the last decade. #F1TitleChampionship

This is insane! We can’t have such a last lap finish.#MaxVerstappen33 #AbuDhabiGP #F1 #F1TitleChampionship

This isn’t over, Mercedes need to appeal this. The FIA changing their decision last minute just to let FIVE cars through is absolutely rigged. Max is a good driver but that’s unacceptable and terrible from the FIA. Don’t even recognise f1 anymore.

This shit is more rigged than the Ballon d'Or

We got robbed. Rigged. A fix. https://t.co/mzV4xXOyGF

You know what’s crazy, they didn’t even let all the lapped cars past, they literally only let the cars between Lewis and Max go by. That was rigged and I won’t be changing my stance on this.

While most of Mercedes's F1 fans felt that the race was 'surely rigged' others congratulated Max Verstappen on his first championship.

Only the Dutch know what the meaning of the real Dutch Lion is all about!
It’s not just power, it’s not fighting!
It’s passion!! Thrive in the moment where it all comes together!
Racing with the heart! 🧡 #Formula1 #gpabudhabi #MaxVerstappen33 #MaxVerstappen #F1Finale pic.twitter.com/Wtz3baOWUG

I said from the beginning of the season that it was gonna be tough for Lewis to get #8! Boy was it, crazy way to end it!

Congrats to @Max33Verstappen
What a season!

@Max33Verstappen YOU ARE THE WORLD CHAMPION!!!! #AbuDhabiGP

Abu Dhabi GP: Here is what Max Verstappen and Lewis Hamilton after the race

Max Verstappen won his first Formula One championship, and was elated with his win “It’s unbelievable,” he said. “I had the opportunity on the last lap. it’s incredible. It’s insane. My team and Honda deserve it. I love them so much. I also want to say a big thanks to Checo.” he said to the media in a conference after winning the Abu Dhabi Grand Prix.

While Lewis Hamilton, who many think was robbed of his eighth championship due to controversial decisions congratulated his opponent and said that his team has worked really hard this season. He said, “Firstly a big congratulations to Max and to his team,” he says. “We have done a great job this year. Everyone has worked so hard in the most difficult of seasons. I’ve been feeling great in the car this past couple of months. I wish everyone to stay safe and have a good Christmas with their families.”  Lewis Hamilton was heard as saying on Sky Sports.