UFC icon Conor McGregor has labelled longtime rival Floyd Mayweather a "dog" after the undefeated boxing legend issued a threat to YouTuber Logan Paul. McGregor's jibe at Mayweather came soon after the boxing superstar tweeted that he would put a "muzzle" on Paul as he did to McGregor following their 'Moneyfight' which took place in August 2017. Fans on social media were quick to notice McGregor's response to Mayweather, which also included a picture of the UFC star during his fight with Mayweather, and urged to two superstars to go head-to-head once again.

By his own admission, boxing great Floyd Mayweather has vowed to fight popular YouTuber Logan Paul before returning to box in Japan. In a recent video clip that went viral, Paul, who has competed in a couple of high-profile boxing fights against fellow YouTuber KSI, called out Mayweather. During the video, the 25-year-old claimed that he would easily beat the undefeated boxer in a street fight or in MMA, adding that he would "snap Mayweather in half with one good punch".

Logan Paul speaks on what would happen in a fight with him vs Floyd Mayweather. pic.twitter.com/i2wP7Bb8oE

The clip soon caught Mayweather's attention and the former world champion at five different weight classes, on Thursday, took to Twitter to respond to Paul. He wrote, "These YouTube girls need to find some barbie dolls to play with because I'm not gonna be a part of these kid games." Mayweather then referred to the time two-division UFC champion Conor McGregor called him out three years ago. 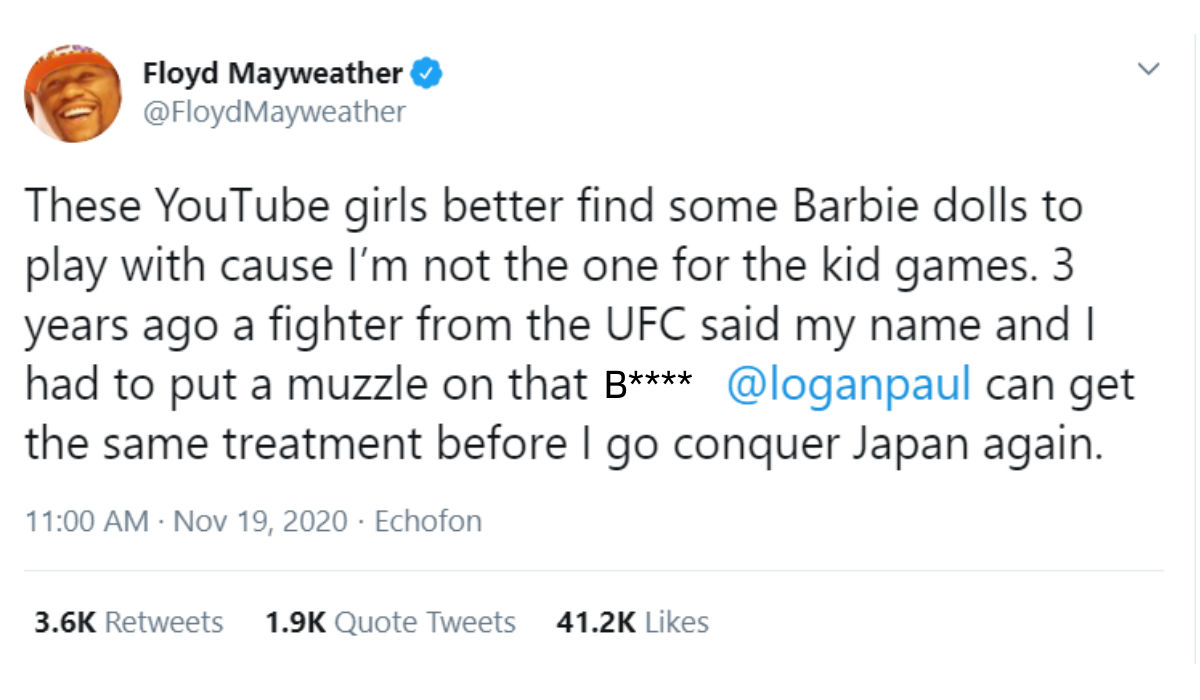 "I put a muzzle on that UFC fighter who called out my name," Mayweather tweeted before saying he wouldn't mind giving Logan Paul the same treatment before he leaves for Japan. However, UFC superstar Conor McGregor, who is set to return to the Octagon in January next year, didn't take the post lying down.

In a simple response, McGregor uploaded a "dog" emoji along with a picture of his fight with the American boxer. Although Mayweather won the bout in 2017, McGregor opted to use an image of the moment Floyd covered up in defence, turning his back on the Irish megastar.

Fans who noticed McGregor's response to Mayweather urged for the duo to go head-to-head once again in the ring. Even Logan Paul took the opportunity to state that he would be the man to end Floyd's undefeated record as he wrote, "50-1".