The biggest news is not Holyfield taking to the ring but that Donald Trump has signed a contract to provide commentary on a "gamecast" as per ESPN. 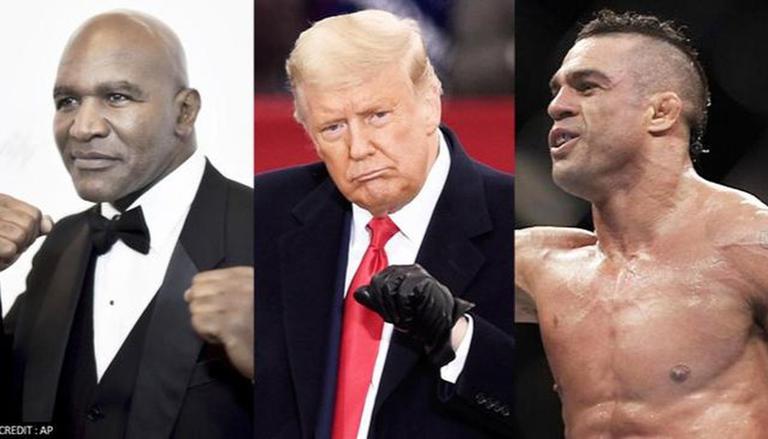 
Boxing legend Evander Holyfield at the age of 58 is set to take on Vitor Belfort in what is a huge comeback to the ring for Holyfield. The bout will take place on Saturday, September 11, at the Hard Rock Cafe and Casino in Hollywood, Florida. However, the biggest news is not Holyfield taking to the ring but the announcement that Donald Trump and his son Donald Trump Jr. have signed a contract to provide commentary on a "gamecast" as reported by ESPN.

"I love great fighters and great fights," Donald Trump said as quoted by ESPN. "I look forward to seeing both this Saturday night and sharing my thoughts ringside. You won't want to miss this special event."

According to Triller, the Trumps will call the entire four-fight telecast that also includes Anderson Silva vs Tito Ortiz and David Haye vs Joe Fournier.

Holyfield stepped in as a short-notice replacement for Oscar De La Hoye after he tested positive for COVID. Belfort, 44, is a former UFC light heavyweight champion.

Trump is a veteran when it comes to the fight game

Trump has hosted several boxing matches in the 1980s and 90s at his casinos in Atlantic City, New Jersey meaning he is not a newcomer when it comes to the fight game.

Triller has had celebrity commentators before when Snoop Dogg was a part of November's Mike Tyson-Roy Jones Jr. telecast and also during the April fight between Jake Paul and Ben Askren, when Pete Davidson was a part of April's telecast.

Jim Lampley, the veteran commentator for HBO, will call the main telecast alongside former champion Shawn Porter. The viewers will have the option to purchase either the main telecast or the Trump "gamecast" for $49.99.

The Real Deal reigned as the undisputed champion at cruiserweight in the late 1980s and at heavyweight in the early 1990s. Holyfield remains the only boxer in history to win the undisputed championship in two weight classes in the three belt era. Holyfield was forced to retire in 1994 upon medical advice, only to return a year later with a clean bill of health. In 1996, he defeated Mike Tyson and reclaimed the WBA title, in what was named by The Ring magazine as the Fight of the Year and Upset of the Year. This made Holyfield the first boxer since Muhammad Ali to win a world heavyweight title three times.

WE RECOMMEND
Donald Trump slams Biden over US' hasty Afghan withdrawal: 'You had to just follow a plan'
Donald Trump reproves US Prez Joe Biden for 'badly managed' Afghanistan withdrawal
Donald Trump '99-100%' likely to run for the US presidency in 2024, close allies reveal
As Donald Trump mistakes ISIS-K for ISIS-X, netizens take a jibe at former US President
Donald Trump expresses condolences to kin of US personnel killed in Kabul attacks