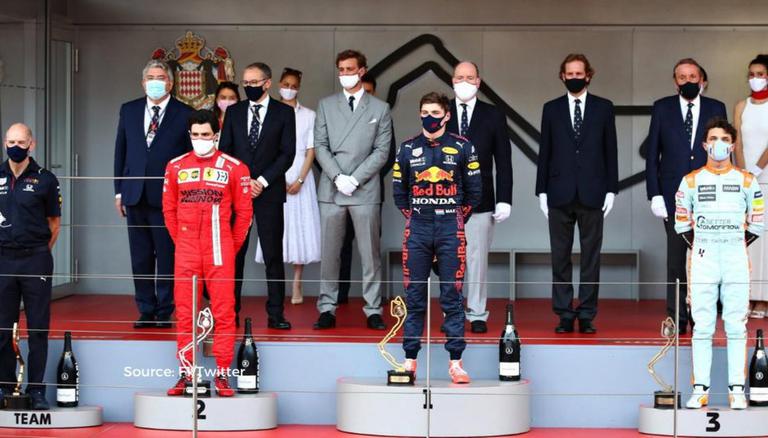 
Although Max Verstappen, Carlos Sainz and Lando Norris failed to create the record of the second youngest podium in F1 history, they perhaps achieved the record of being the most hilarious. Fans can expect banter each time former McLaren teammates Sainz (now at Ferrari) and Norris share the stage, but this time the duo along with Verstappen took it to another level. Here is the F1 2021 banter at the Monaco Grand Prix 2021.

The trio of Max Verstappen, Carlos Sainz and Lando Norris were so close to breaking the F1 record for the youngest podium in history but the "old guy," as Verstappen points out, ruined it apparently. Sainz, 26, is the old guy as Verstappen is 23 and Norris is 21. Sainz anticipated that such a joke was coming his way, suggesting how well the old Toro Rosso teammates know each other.

The F1 2021 banter continued as Lando Norris pulled the leg of his former teammate during the Monaco Grand Prix 2021 press conference. Norris told Sainz that it seemed as though Sainz "stepped up as a driver this weekend" to which Sainz responded that he "always steps up in Monaco". However, Norris was quick to point out that Sainz could not do so in qualifying as he was beaten by his Ferrari teammate Charles Leclerc. Sainz seemed slightly annoyed and helpless amidst Verstappen and Norris as he said, "These guys...Let's get serious, okay?"

While Lando Norris was giving his post-race interview of the Monaco Grand Prix 2021, his former McLaren teammate Carlos Sainz attempted to hijack the interview and grab all the attention. In response, Norris attempted to shrug off Sainz as he hilariously said that the Spanish racer was attempting to steal his moment of glory. And if anyone thought that was the end of the bromance between the two former teammates they are here for a surprise.

The duo of Carlos Sainz and Lando Norris continued the F1 2021 banter on the Monaco Grand Prix 2021 podium. The former teammates seemed to ignore the formal celebration of a podium as they can be seen pushing each other while celebrating. Fans will hope that the F1 2021 banter can continue between Max Verstappen, Carlos Sainz and Lando Norris in future races.

READ | 1996 Monaco Grand Prix: The F1 race that had the least finishers