Tokyo Olympics: France's Mourad Aliev Refuses To Leave The Ring After Getting Disqualified In Boxing Q/F 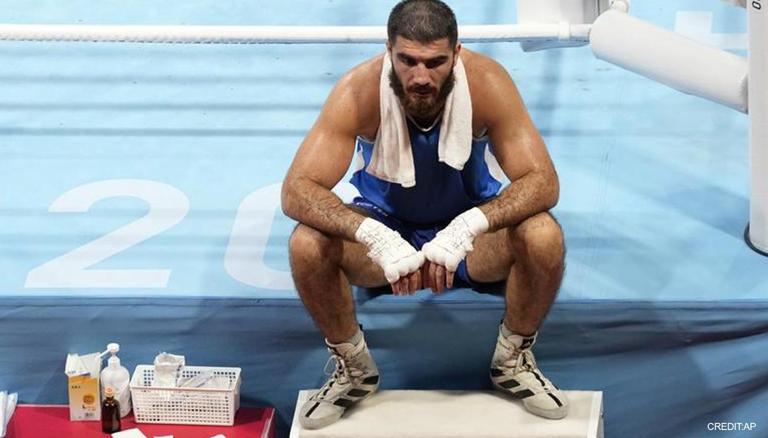 
France's Mourad Aliev sat on the Olympic ring apron in protest after he was disqualified from the Tokyo Olympics 2020 men's super heavyweight boxing quarterfinal match against Great Britain's Frazer Clarke on Sunday because of an intentional head butt.

Mourad Aliev reacted with outrage when referee Andy Mustacchio disqualified him with four seconds left in the second round.  The referee determined Aliev had intentionally used his head to clash with British opponent Frazer Clarke, who had significant cuts near both of his eyes.

An irate Mourad Aliev sat down on the canvas just outside the ropes and above the steps leading down to the arena floor after the verdict was announced and did not get up from there as he protested against the referee's act of getting him disqualified from his bout.

The French officials came forward and had a word with him and also offered him water as they tried to calm the boxer down who expressed discontent in the heat of the moment. At the same time, the officials also ensured that the situation was handled well and nothing untoward happened.

After more than 30 minutes, boxing officials emerged and spoke with Mourad Aliev and the French team. Aliev left the apron and everyone went inside the Kokugikan Arena — but about 15 minutes later, he returned to the arena and resumed his protest in the same spot.

Mourad Aliev protested vocally and emphatically immediately after the bout, yelling to the mostly empty arena: “Everyone knows I won!” He also refused Clarke’s attempts to calm him. Aliev won the first round on three of the five judges’ scorecards in what was a close fight.

“I felt there was a couple of heads going in there,” Clarke said.