Javelin thrower Neeraj Chopra won the country's seventh medal and first gold in the Tokyo Olympics 2020 as the country's sporting fraternity congratulated him. 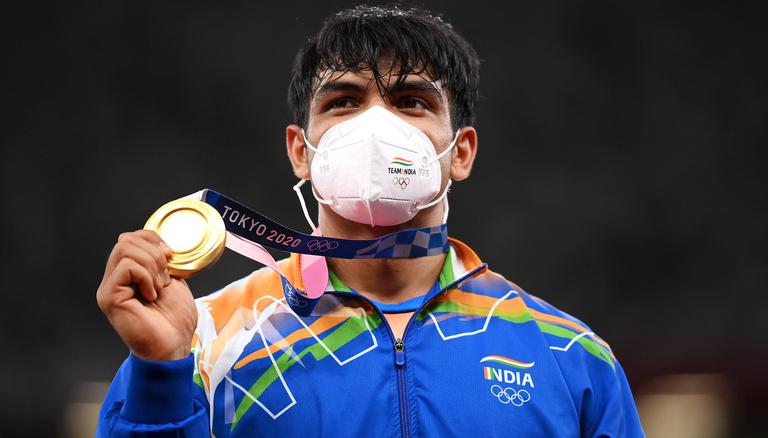 
Javelin Thrower Neeraj Chopra on Saturday, August 7, scripted history as he won India's first gold medal at the Tokyo Olympics, and ended the nation's 100-year-long wait of winning a medal in athletics in the mega-event. Chopra threw a distance of 87.58m to win the gold medal and shock the athletic world. India's sporting fraternity was quick to congratulate the 23-year-old from Khandra village near Panipat, Haryana for his historic win.

The messages come pouring in

Former Olympics gold medallist Abhinav Bindra responded with a heartfelt message for the youngster saying that he was "extremely proud" of him.

And Gold it is for @Neeraj_chopra1 .Take a bow, young man ! You have fulfilled a nation's dream. Thank you!
Also, welcome to the club - a much needed addition! Extremely proud. I am so delighted for you.

Indian track and field legend PT Usha was emotional and said that Chopra realised her "unfinished dream" of winning at the Olympics.

GOLD This is the tweet. This is the emotion. Thank you Neeraj Chopra for giving us this joy. You have inspired us, you have given us hopes. You are our hero pic.twitter.com/1F7yfe7z40

Harsha Bhogle claimed that winning the gold for India was a "moon-landing moment."

This is India's moon-landing moment. One of the greatest days in Indian sport. Overjoyed. Feel like a child again. #NeerajChopra

Anil Kumble was also part of the congratulatory messages and so was Mithali Raj who said that she could not get over the moment.

Yay yay !!! Can’t get over this feeling .. it’s a gold . GOLD !!! Neeraj chopra you have been scripted in history #Olympics2020 pic.twitter.com/6yoWElXO3j

MC Mary Kom chimed in saying that it was a historic medal.

Woww.. finally GOLD🥇🤩
Another very special moment for Indians 🇮🇳
Congratulations to @Neeraj_chopra1 for winning the Gold🥇  medal in the #Tokyo2020 #Athletics
Neeraj you inspired crores of youth by achieving this splendid achievement for the country through years of hard work👏🏻 pic.twitter.com/gx2TB49mvW

Indian cricketing legend Sachin Tendulkar wrote in Hindi "Neeraj has made his javelin reach the sun."

India shines brighter today because of you, Neeraj.

Your javelin carried the tricolour 🇮🇳 all the way and made it flutter with the pride of every Indian.

What a moment for Indian sport!#Olympics #Tokyo2020 #Athletics #Gold pic.twitter.com/FZ52Ti6EZc

How Chopra made the country "shine brighter"

Chopra came into the final as a medal contender after topping the qualification round on Wednesday with a stunning first-round throw of 86.59m. But only a few would have thought he would bludgeon his way to gold in such a dominant fashion at the grandest of stages.