The war within the Indian Olympic Association further intensified with its President Narendra Batra (before opting for self-quarantine after his father was found COVID 19 positive) replied in a very strongly worded letter to Secretary Rajiv Mehta's accusation of misuse of powers, by explaining how he remained within his limits and exercised powers vested in its Constitution.

Batra had reconstituted all the Commission and Committees of the IOA in a major overhaul redistributing powers and functions of all its officials including the Secretary, who has accused him of misusing his powers without consulting him.

In a letter to the IOA Secretary General, copy of which is with Republic TV, Batra explains his position:

"What agenda you made for that AGM meeting in 2017 was your decision and not mine. What was the mindset for getting this approved and trying to take away powers of President and share them with Secretary General was decided by you even before the 14.12.2017 AGM was held, shows your mindset and advance planning. The President elect on 14.12.2017 i.e me was merely a mute spectator, who was smiling and shaking hands while you were busy with your pre planned agenda."

Explaining the ambit and provision of IOA President's powers, Batra pointed out: "Rule 18.3 of IOA Constitution reads as follows: All required commissions/committees will be formed by the President to be ratified by the Executive Council or by the Annual/Special General meeting. I do not find any mention in Rule 18.3 of involvement of Secretary General and/or the President is bound to take advice from Secretary General to form any Committee/Commission."

The IOA President concluded that "in the present case all decisions by President are taken as per Rule 18.3 of IOA Constitution and hence are valid and very much within the power & authority of the President, as provided under the IOA Constitution and from now on it, is up to the EC of IOA to accept/reject by majority vote the names of Chair & Members of the various committees/ commission formed President IOA." 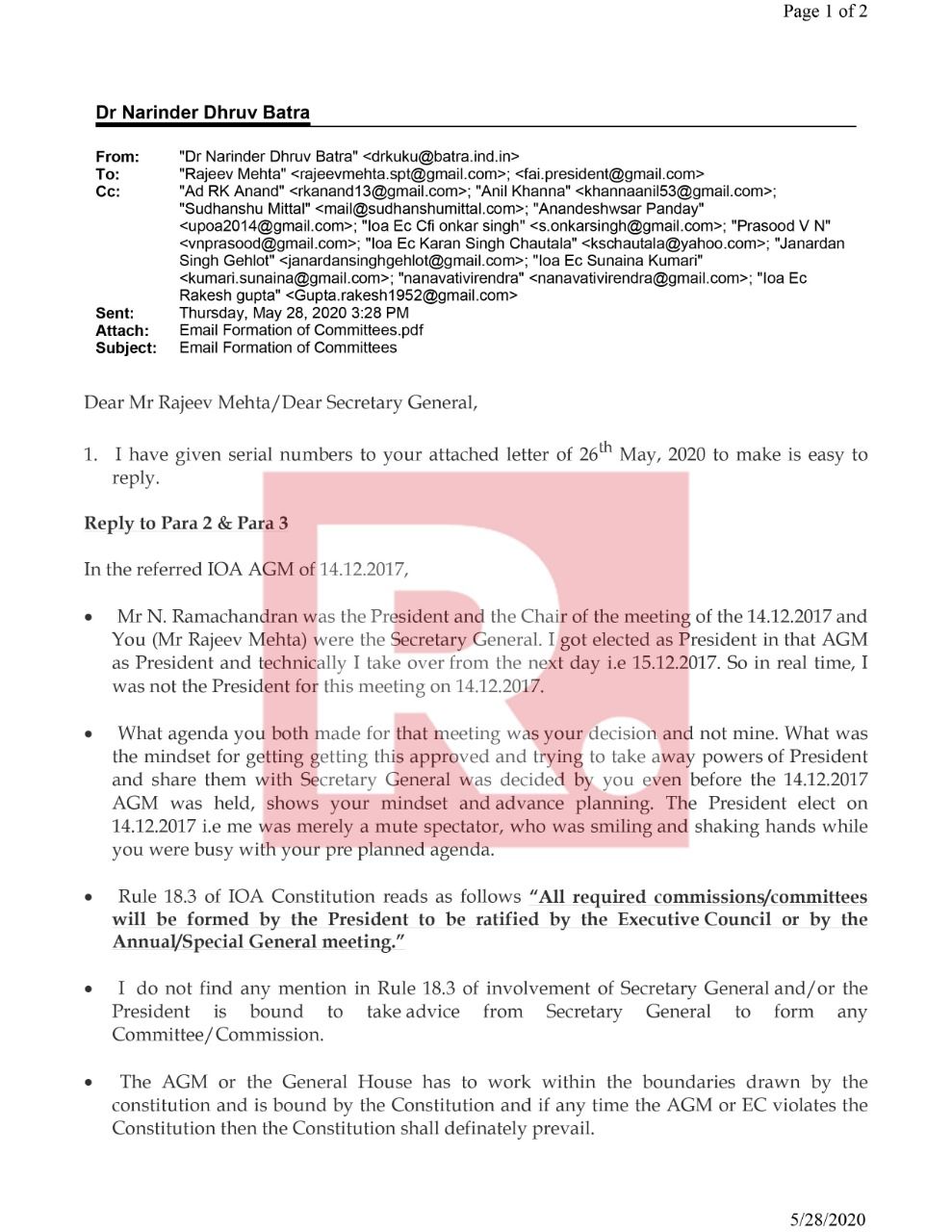 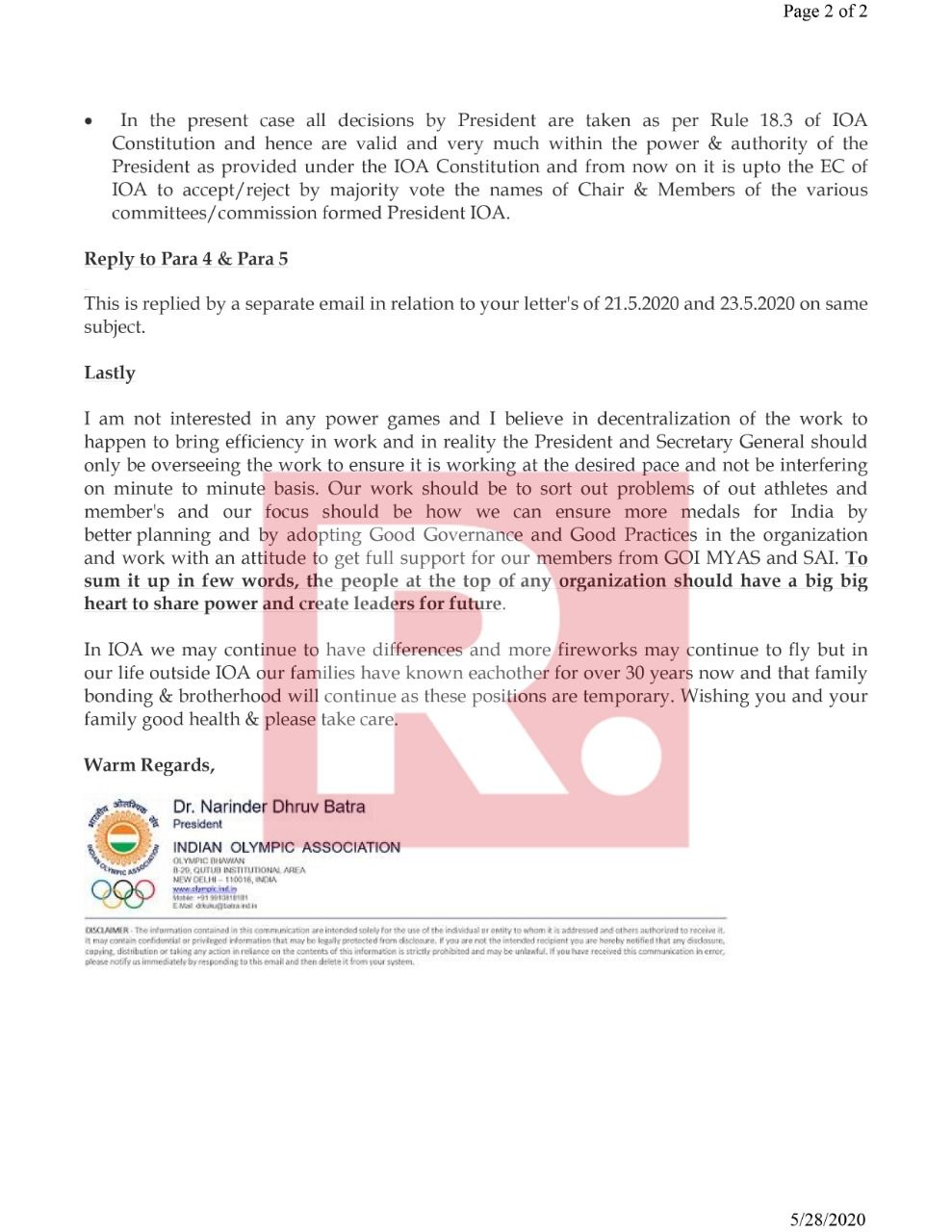 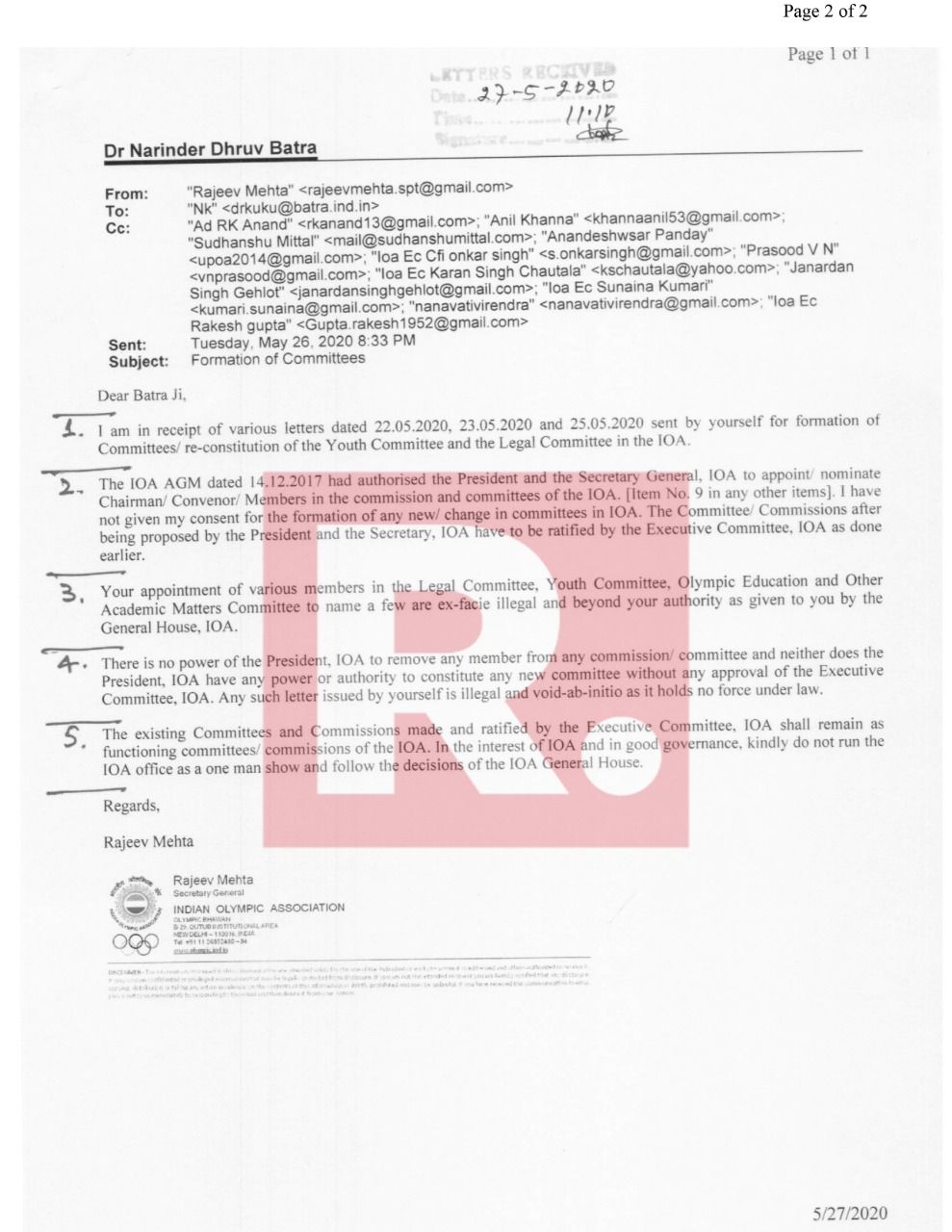 LATEST NEWS
View all
42 mins ago
Cancer-stricken Dingko recovers from COVID-19, back at home in Imphal
1 hour ago
Bryson DeChambeau tied for early 2nd-round lead in Detroit
8 mins ago
IOC-led paper fears salary cuts for athletes during COVID crisis could fuel corruption
1 hour ago
Russia says World Athletics freeze is a blow to athletes
1 hour ago
Back on the bump: New dad Cole sets sights on Yankees title