Lewis Hamilton was seen squeezing himself and passing behind Sergio Perez's Red Bull car after the Spanish Grand Prix last weekend in a viral picture. 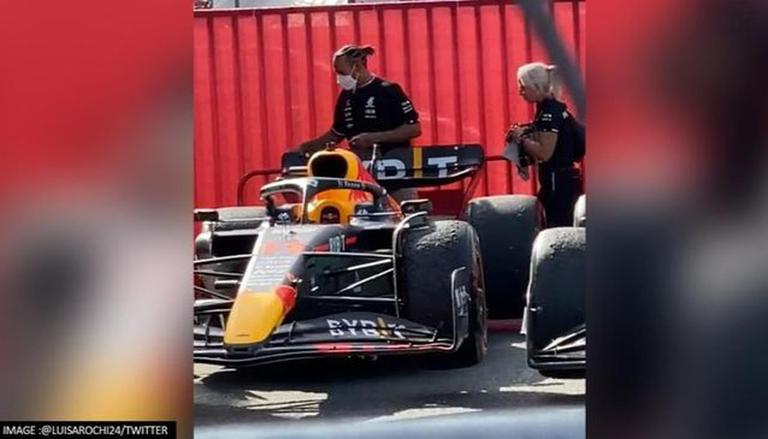 
In a viral picture that has now sparked debate on social media, Mercedes superstar and seven-time Formula One world champion Lewis Hamilton can be seen walking behind Sergio Perez’s Red Bull car after the Formula 1 Spanish Grand Prix 2022. Motoracing fans were left confused upon seeing the picture, as they wondered whether Hamilton touched the Red Bull’s rear wing under parc ferme conditions. Notably, a similar incident took place last year, when the reigning F1 world champion Max Verstappen was spotted touching Hamilton’s rear wing after the qualifying session at Interlagos and was fined an amount of €50,000.

The picture was understood to be taken some time after the podium ceremony as the cars were parked side by side, after being moved from the initial parking space after the checkered flag. However, in a new video shared by a fan, Hamilton can be seen trying his best to avoid making any contact with the Red Bull’s wing. As per Motorsport, it appears as if the video was shot while Hamilton was returning from the circuit’s medical centre for a routine doping test.

Watch the viral video of Lewis Hamilton with the Red Bull car:

That’s my video/photo, it’s still not clear weather he touched it or not pic.twitter.com/TcAToSIxzO

Meanwhile, as reported by The Independent, the Mercedes AMG Petronas F1 team denied that the seven-time champion torched the rear wing of Sergio’s car at the Circuit de Barcelona-Catalunya, last Sunday. In a statement to GPblog, Mercedes said, “Some people seem to think he is touching the wing, but his hand isn’t on it. At each end of the flap, you can see the white dot for legality - and the bracket which allows the flap to pivot when the DRS opens. Some people seem to think one of those brackets is his thumb - but it’s clearly not, as it’s the same on both sides.”

@fia @F1 This will be allowed as it's @LewisHamilton not some other driver right?

This is ridiculous 😂😂😂 Verstappen, quite rightly, got his fine/punishment for it after getting out of his car and doing THIS to the Merc rear wing…Hamilton is literally just brushing past the Red Bull here…how are people trying to compare??? 😭😭 pic.twitter.com/KXCKrnHRQJ

Lewis Hamilton can touch rear wing of RedBull and won’t even get fine. The Power he holds on the FIA.
Insane 🔥🥵

In which case, who's thumb is it on the other side of the wing (see attached pic)?

What is being mistaken for Hamilton's thumb is actually the right DRS pivot hinge (there is one either side of the rear wing moving plane, near the white FIA legality reference dots).

Red Bull finishes Spanish GP with 1-2 on the podium

Coming back to the sixth round of the F1 2022 season, the Spanish Grand Prix, Hamilton finished the race at P5 after dropping back to 19th at the start of the race. It was the best race for Hamilton in the season as he earlier wanted to quit the race after tangling with Haas’ Kevin Magnussen. In the meantime, Hamilton’s teammate Geroge Rusell finished the race at P3 and stood at the podium alongside Verstappen and Perez. Verstappen won the race after Charles Leclerc suffered a DNF, while Sergio followed at P2, completing a 1-2 for Red Bull.