MC Mary Kom, the legendary Indian boxer, probably played her last Olympic match at the Tokyo Games. Mary was defeated in the Round of 16 clash 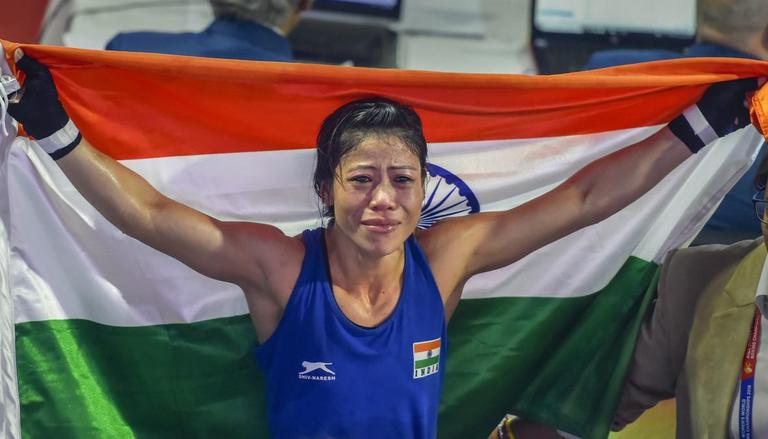 
MC Mary Kom, the legendary Indian boxer, probably played her last Olympic match today at the Tokyo Games. Mary was defeated in the preliminary round of the women's flyweight match by Colombian boxer Ingrit Valencia. With the Round of 16 loss, Mary's chances of winning another Olympic medal have also faded, as the Indian boxer failed to qualify for the quarter-finals. Given her age and deteriorating reflexes, the 38-year-old may never compete in the Olympics again. Let's look at the top five moments in Mary Kom's career.

Mary won her first Olympic gold in the 2012 London event, where she beat Britain’s Nicola Adams in the 51kg category. After winning bronze in London, Mary became the first Indian female boxer to win an Olympic medal. She also rose to unprecedented fame and went on to win several accolades and honours after that, including the prestigious Padma Bhushan, the third-highest civilian award in India.

Mary won her eighth World Boxing Championships title with a bronze medal win in 2019. She became the first-ever boxer, male or female, to achieve the feat in the competition. A year later, Mary was awarded Padma Vibhushan, the second-highest civilian award in India.

Mary won her first-ever Commonwealth medal at the age of 35 when she beat Northern Ireland's Kristina O'Hara in the 45-48kg category. Mary won the gold after an effortless game that saw her emerge victor with a 5-0 win over O'Hara. Mary followed her outstanding performance at the Commonwealth by winning gold in World Championships a few months later.

READ | Boxing: India's MC Mary Kom out of Tokyo Olympics 2020 after nailbiting Round of 16 loss

The pre-quarterfinal match between Mary Kom and Ingrit Valencia was played at the iconic Kokugikan Arena, which is considered the home sumo wrestling in Japan. In the first round, Valencia defeated Mary after four out of five judges raised their hands for the Colombian. The first round ended with the scorecard reading 30-27 in favour of Valencia. Mary bounced back stronger in the second round and beat Valencia. Three out of five judges ruled in the London Olympics bronze medallist's favour. The judges ruled in favour of Mary again in the third round but she lost the match as only the best of three are picked in each round.

Following a closely contested match on Thursday, a panel of five judges ruled in favour of the Colombian boxer, and Mary was defeated 3-2. Mary had advanced to Round of 16 clash after beating Dominican Republic's Miguelina Hernandez, who is 15 years younger than her.