John Collins who has made a stron start to the season was suspended for 25 games without pay on Tuesday after testing positive for  Peptide-2 a growth hormone.

In another violation of the NBA's Anti-Drug Program, Atlanta Hawks forward John Collins was suspended for 25 games without pay on Tuesday after testing positive for Peptide-2 a growth hormone. Collins' suspension begins with Tuesday night's game against San Antonio Spurs. Collins tested positive for Peptide-2. 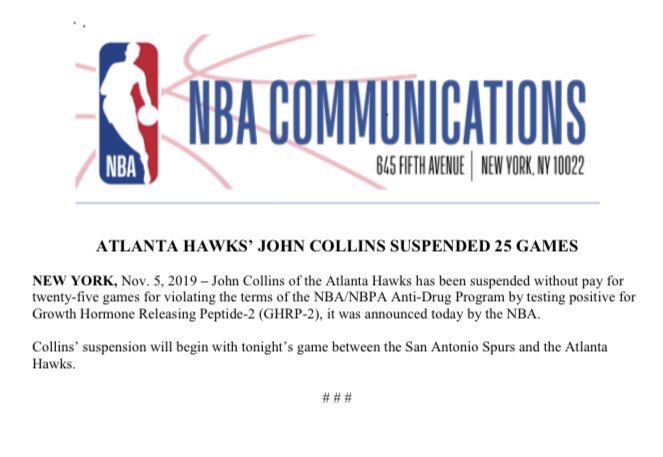 Speaking to the NBA website, Collins apologised to his teammates, the Hawks organisation, fans, partners and community for this situation. He also said that he is incredibly frustrated and disappointed for putting the team in this position. He also added that he has been always careful about what he consumes, and the supplement he took, which unbeknownst to him, had been contaminated with an illegal component. The forward now plans to fight his suspension in arbitration so that he can get back on the court as soon as possible and continue to contribute to our 2019-20 campaign.

Collins is having a good start to the season so far with 17.0 points, 8.8 rebounds and 2.0 blocks through five appearances.

Hawks President of Basketball Operations Travis Schlenk said that the team are committed to supporting John as he learns from this setback and continues to grow as both a player and a person. He also said that Head Coach Lloyd Pierce believes that Collins is truly remorseful for his actions and the team will provide support on and off the court while we look forward to his return to the team.

The NBA, like other major professional US sports leagues, has not signed with the World Anti-Doping Code, instead, the league is running its own anti-doping program.