A SpiceJet flight ferrying a contingent of the Indian boxing team, including Mary Kom, reported a fuel emergency to land at the Dubai airport on Saturday 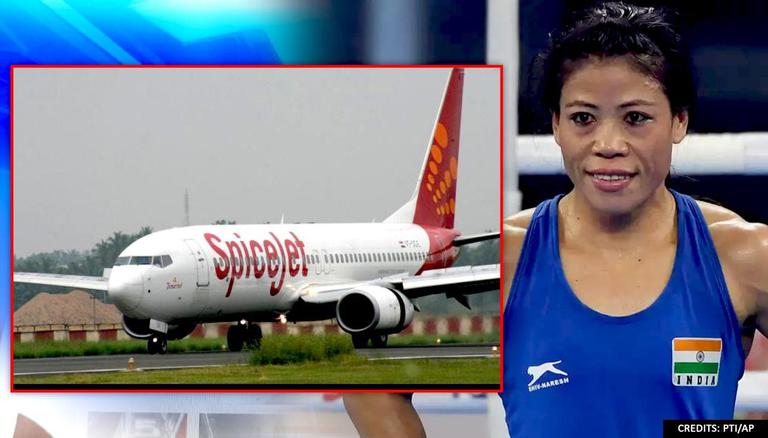 
In the latest development, a SpiceJet flight ferrying a contingent of the Indian boxing team, including Mary Kom, reported a fuel emergency while landing at the Dubai airport on Saturday. As per sources, the fuel emergency landing report was made after confusion prevailed over the scheduled landing of the flight. The pilots of the aircraft reported a shortage of fuel to the ATC, following which it was allowed to land, after a 30-minute delay. After that, the crew and passengers cleared the immigration process and the entire incident was brought to the notice of DGCA. A probe has been ordered, as per reports.

A SpiceJet flight carrying Indian boxing team, including Mary Kom, has reported a fuel emergency landing at Dubai airport today over landing confusion. After half an hour delay, the flight was allowed to land at Dubai airport.

Meanwhile, before landing, pilots of the aircraft had reported to ATC that the plane is running on a shortage of fuel. Later on, all members of the team were allowed to enter UAE & clear the immigration. Entire incident has been reported to DGCA & investigation has been ordered

An Indian boxing contingent travelled on a SpiceJet flight from Delhi to Dubai today. It has reached Dubai safely & all passengers have cleared immigration. Flight & passengers carried proper documents. Flight was not filed as a cargo flight; info absolutely wrong: SpiecJet spox

It was a regular passenger flight under the Air Bubble agreement and the same aircraft is bringing passengers to India from Dubai on its return leg: SpiecJet spox

Mary Kom says Tokyo Olympics 2021 will be her last

Ahead of the upcoming 2022 Summer Games, India's ace boxer Mary Kom has said that the Tokyo Olympics will be her last appearance at the marquee event. Mary Kom, who won the bronze in the 2012 Olympics, pointed out the age limit barrier which restricts her from qualifying for the Olympics. Re-visiting her achievement in the 2012 Summer Games, Kom had expressed that her career would be 'diminished' if she hadn't participated in the prestigious Olympics.

"Tokyo will be my last Olympics. Age matters here. I am 38 now, going on 39. Four (three) more years is a long time," Mary Kom told the Olympic Channel.

Initially, 40 was set at the age limit for participation in the Tokyo Olympics which was slated to be held in 2020, however, due to the COVID-19 pandemic the age limit had been extended to 41. Having turned 38 this March, Mary Kom will be over the current limit by the time the next Olympics in Paris 2024 rolls around.