Tokyo Paralympics 2020: Cyclist Slows Down To Ride Alongside Another Rider; Cheers Her On

Stuart Jones slows down and rides alongside Toni Mould to cheer her up. Both the cyclists hail from different countries and were competing in different events. 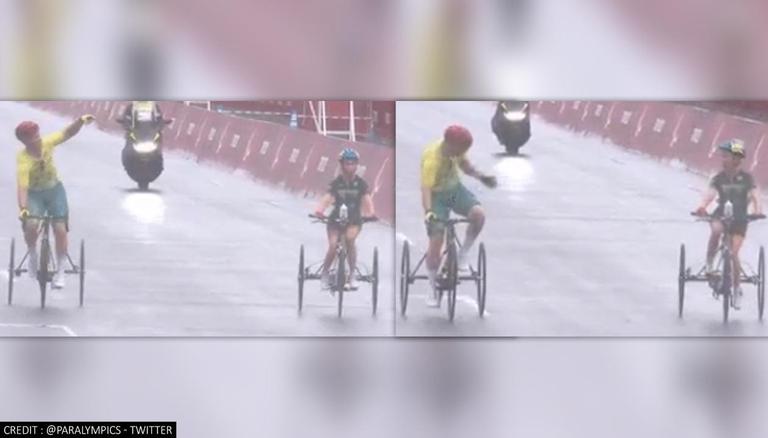 
In a mesmerizing moment for sports lovers across the globe, Australian cyclist Stuart Jones slowed down mid-race to ride alongside South African cyclist Toni Mould, in order to cheer her up in the ongoing Tokyo Paralympics 2020. Despite hailing from different teams and competing in different races, the sportsmanship shown by Jones has fetched wide-spread applause and respect for him. Competing on Thursday in the Men’s T1-2 road race, Jones slowed down coming up the straight upon spotting Toni Mould.

They're from different teams and competing in different races, but there's always support and respect between our Paralympians ❤️@UCI_paracycling #ParaCycling #Tokyo2020 #Paralympics pic.twitter.com/poWSq9Uv9V

While boosting Mould's confidence, according to the TV coverage during the race, Jones said, “Keep going. You are going great guns. You have only got a lap to go”. Mould was a lap behind the rest of the field and finding it tough to compete when she was spotted by Jones. Jones cheered up Mould with a smile on his face and in reply, Mould forgot all the pain and exhaustion she was suffering from and smiled back at him.

Toni Mould is the first female Para-cyclist ever to represent South Africa. She is also the most impaired athlete with quadriplegic cerebral palsy and has to fundraise to attend events. Respect the effort #Paracycling #SouthAfrica #trikeracing #Tokyo2020 https://t.co/wpQ2WPCoH6

According to Para-cycling pundit and Rio 2016 Paralympian, Toni Mould suffers from quadriplegic cerebral palsy and was the most impaired athlete in Fuji Speedway on Thursday. Stuart Jones took to his Instagram account in order to elaborate his decision of slowing down alongside Toni Mould. In the Instagram post, Jones mentioned that he came across Mould at the bottom of the climb, nearly 2-3 kilometres behind the finish line. He further said that Mould is coached by a former teammate of his, Carol Cooke, who has been training Mould for months leading up to the Paralympics.

Jones further added he knew that Mould wasn’t the best climber, just like him. He knew he won’t be making it to the podium at the time of spotting Mould and ceased his race to encourage Mould to climb the slope. In conclusion of his post, Jones said, “I was privileged to witness the courage and determination shown by this lady in her race. Whilst she didn't podium either, she is a true champion. Results-wise my first Paralympics could be considered a failure, but I am walking away with things more precious and important than a few shiny medals. Plus, there is, hopefully always another race”. He ended the post by saying- Life is good.