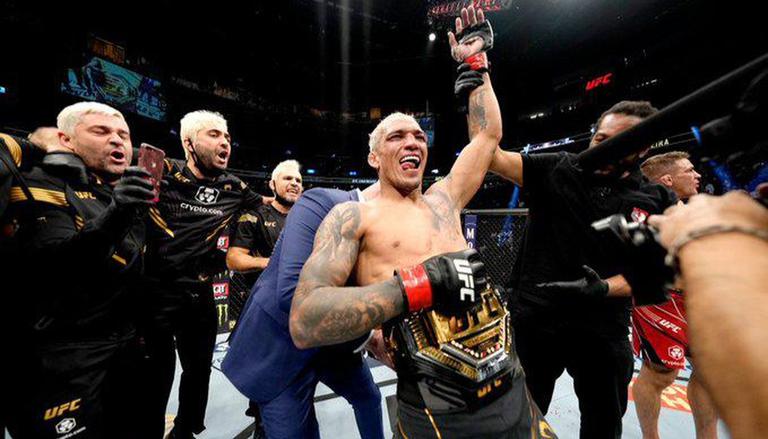 
Charles Oliveira has successfully defended his first UFC lightweight title against Dustin Poirier in a stunning bout that took place at T-Mobile Arena in Las Vegas on Sunday. Oliveira beat Poirier in the third round by effecting a rear-naked choke to force the Brazilian into tapping at 1:02 minutes into the round. After the match, Oliveira spoke from inside the octagon and said through a translator: "I'm the world champion. I'm the man. They talk. I do it."

The match began with Poirier immediately gaining an upper hand as he was able to drop Oliveira on two different occasions. However, Oliveira made a stunning comeback in the second round, scoring an early takedown and landing elbows on the American to finish on top. The third round saw Oliveira quickly placing Poirier in a rear-naked choke to finish the game with UFC gold. With the win, Oliveira moved his professional MMA record to 32-8.

On top of the world 🌎🏆 #AndStill

Meanwhile, Julianna Pena claimed the women's bantamweight gold in the UFC 269 co-main event after defeating Amanda Nunes with a thrilling second-round submission. The 32-year-old Pena won the title after beating Nunes in the second round by effecting a rear-naked choke. After the match, Pena said, "I told you. Don't ever doubt me again. Willpower, strength and determination, it will take you places. I definitely expected a win and I'm just so grateful. The world is my oyster and you literally have the ability to do anything that you want in this life, and I just proved that tonight".

The bout between Pena and Nunes began with the Brazilian gaining an upper hand as she looked to claim a first-round submission. However, Pena fought back and effectively defended against Nunes to survive for another round. The second round saw Pena and Nunes trading punches in a lengthy exchange before the Brazilian eventually broke down and submitted to Pena following a rear-naked choke.

Pena also offered Nunes a rematch immediately after claiming the bantamweight title at UFC 269. Pena said she is ready to fight Nunes again once her injured eye recovers and she spends some quality time with he family. We can do it next, I’m free next month, two months from now – whenever they want to do it I’m ready. If she wants to do a rematch, we can do a rematch," Pena said after the match.

WE RECOMMEND
Conor McGregor bulks up to 190lbs; will he fight next in MiddleWeight? All we know so far
Khabib shuts up Tony Ferguson with facts; 'You never won a single round in the UFC'
Conor McGregor offers words of upliftment to Ritu Phogat after MMA loss; 'Let’s go India'
Dustin Poirier opens up on his 'never going to be settled' rivalry with Conor McGregor
Jake Paul vs Tommy Fury cancelled, former UFC champion to face 'Problem Child': Report
Listen to the latest songs, only on JioSaavn.com