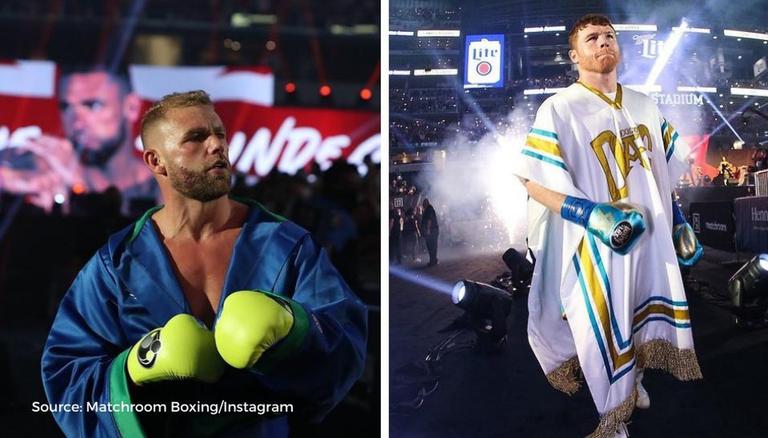 
Saul Canelo Alvarez beat Billy Jose Saunders on Saturday in Texas with an eight-round uppercut to win his world super-middleweight title unification fight. Saunders was unable to reemerge for the ninth round as it was reported that the Brit underwent surgery on a broken orbital bone. After the beating, Saunders' father went to have a check on his son before being attacked in an ugly brawl. So, here is more on queries such as - 'What happened to Billy Joe Saunders father?' and 'Why was Billy Joe Saunders father attacked?' -

The Canelo Alvarez vs Billy Joe Saunders fight was called off by Saunders' coach Mark Tibbs, who cited that he had too much love for Saunders and under no circumstances would he have sent him out there again considering his condition. Speaking to iFL TV, Tibbs said, "It's never easy in a moment like that. But his leading eye was damaged and I've got too much love for the man to send him out there or ask him to go out there. For me, he was starting to build momentum. He got that eye socket - it looks broke to me - and then obviously, you know, the game falls apart."

Billy Joe Saunder's father hurriedly attempted to make his way into the ring to check up on his son following his crushing defeat to Canelo Alvarez. However, Saunders' father was aggressively stopped from entering the ring as the security pushed him over, thereby sparking a wild brawl. Other members of Team Saunders raced to the incident while WBC world heavyweight champion Tyson Fury tried his best to defuse the situation without getting involved in the incident. A short clip of the ugly brawl can be seen in the tweet below.

Wild scene last night as Tom Saunders, concerned about his son Billy Joe Saunders as fight is stopped, attempts to make way to ring to check on him only to be aggressively pushed by security. Totally out of line from security, IMO #CaneloSaunders pic.twitter.com/4Uw2V18pyh

Promoter Eddie Hearn said that Billy Joe Saunders stayed in Dallas to undergo surgery on his damaged eye. Speaking after the clash, the Matchroom boss said, "You could see as soon as he [Canelo] hit him [Saunders] that he'd done his eye socket. I think because he couldn't see, the next round was going to be a bad situation. I think he would have got badly hurt in that round. He's gone to hospital and I believe he'll have that operated on immediately. So, he's going to be out for a long, long time."

Just at hospital in Dallas, @bjsaunders_ stayed in overnight. Suffered multiple fractures to orbital area and will undergo surgery this afternoon.

WE RECOMMEND
Canelo Alvarez vs Billy Joe Saunders fight purse: How much did the 2 boxers earn?