What Happened To Colt Brennan? Legendary Hawai'i QB And Ex-NFL Player Dies At 37

What happened to Colt Brennan? The legendary college football star tragically passed away in the early hours of Monday, with his family by his side. 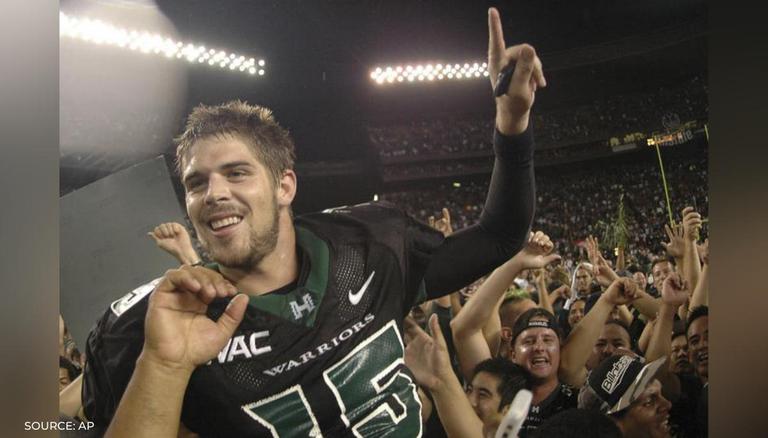 On Tuesday, reports out of Hawaii emerged with some horrific news. Colt Brennan, the former University of Hawai'i star quarterback, died at the age of 37. Colt's father, Terry Brennan confirmed to reporters that his son died in a hospital in California and football fans were quick to send in their tributes to the former NCAA superstar. However, some fans are curious to know more about the Colt Brennan cause of death and the Colt Brennan NFL career -

While speaking to ESPN on Tuesday, Terry Brennan confirmed that his son, Colt, tragically passed away in the early hours of the morning at a hospital in Newport Beach, California. The day before the Colt Brennan death, paramedics were called to a hotel room where he had been with a few other people. To answer the 'What happened to Colt Brennan?' query, Terry Brennan said his son had ingested something laced with fentanyl and never regained consciousness. At the time of the Colt Brennan death, he was aged 37.

According to reports, Colt Brennan had tried to enter a detox program at an area hospital, but he was turned away because there were no beds available. Colt was being treated at a rehabilitation facility when he was found unconscious a few days ago. His death was ruled as a drug overdose. Terry Brennan said that a number of family members were present at Colt's side when he died.

While speaking about the programme, Terry Brennan said, "He (Colt) was really into it. It involved a lot of physical activity and he liked it. He was working with soldiers who had come back from Afghanistan and Iraq with similar problems. He was doing quite well with it for four months. Then something happened and he went to the dark side, and it was just not good."

Colt Brennan's run of success from 2005 to 2007 helped put Hawai'i football on the map. Brennan put together a decorative career in Hawai'i. In 2006, Brennan completed 72.6% of his passes while throwing for 5,549 passing yards and 58 touchdowns.

His passing yards total from that season is currently the seventh-most in FBS history, and his eye-popping touchdown total was a record until current Cincinnati Bengals quarterback Joe Burrow threw for 60 scores in 2019 for LSU. Instead of entering the NFL Draft, Brennan decided to return to Hawai'i for his senior season.

READ | What happened to Tim Tebow? Why was Tim Tebow away from the NFL?

That year, Brennan led the University of Hawai'i to their first Western Athletic Conference title. He threw for 4,343 passing yards with 38 touchdowns and finished third in the Heisman Trophy voting. Brennan was the first player from Hawaii to finish as a Heisman finalist.

We are saddened to hear about the passing of former Washington QB Colt Brennan. pic.twitter.com/XIXs3LtqiD

After his time at Hawai'i, Brennan was taken in the sixth round of the 2008 draft by Washington, but injuries prevented him from playing his rookie year, and he was released. He never played in the NFL. A car accident in 2010 left Brennan with a traumatic brain injury, and that made it difficult to continue his football career. He tried to catch on in the USFL, Canadian Football League and Arena Football League but didn't stick.