What Happened To Kyler Murray? Arizona Cardinals QB Inactive For The Game; Know Why

The Arizona Cardinals vs Carolina Panthers game witnessed the Cardinals missing their star quarterback Kyler Murray for the second game following an injury. 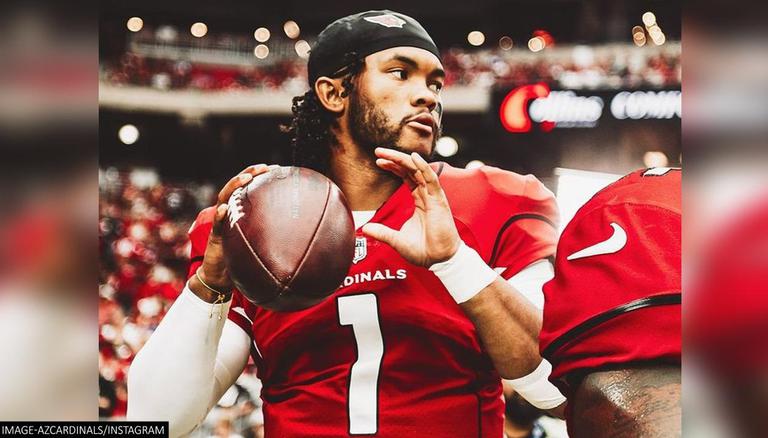 
Arizona Cardinals were handed a crushing 10-34 loss by Carolina Panthers on Monday. However, the team still continues to top the NFC West division with an 8-2 win-loss record.

The Arizona Cardinals vs Carolina Panthers game also witnessed the Cardinals miss their star quarterback Kyler Murray for the second straight game due to an injury he suffered during the game against Green Bay Packers. However, if recent reports are to be believed the player is likely to make his comeback against Seattle Seahawks.

What happened to Kyler Murray?

Ahead of the Panthers game, Arizona Cardinals had lost to Green Bay Packers 21-24 during which quarterback Kyler Murray had suffered a leg injury. According to the report by sportingnews.com, Kyler Murray was tackled from behind on a run near the end of the fourth quarter with his knees hitting the turf as he came down. His right knee appeared to hit the ground hard and even though he was able to get up and continue to play, he left two plays later after throwing an interception in the end zone effectively.

Talking about Kyler Murray's injury update, ESPN reported that Cardinals coach Kliff Kingsbury said after the game that Murray was "progressing" but "wasn't ready" to play against the Panthers. He had said that the result would not influence his decision to play Murray next week in the team's NFC West showdown against Seattle.

"We're going to be smart, make sure he's 100 per cent or close enough to where he can do his thing. Like I've said, whatever percent that is, he's got to be able to move and make plays and do what he does," Kingsbury said.

Murray has been one of the best quarterbacks in the NFL in the current season and was viewed as an MVP candidate before being sidelined due to his injury. He has completed 72.7% of his passes for 2,276 yards and 17 touchdowns against seven interceptions and has also run for 147 yards and three scores.

Cardinals, who are currently at the top of their division, could see Los Angeles Rams tie them for the lead by registering a win over the San Francisco 49ers in their upcoming game. However, the Cardinals' 3-0 record in the division and a road win over the Rams, could prove huge in a tiebreaker scenario.

WE RECOMMEND
Trick or treat: Browns' Garrett having fun with Halloween
Cardinals acquire tight end Zach Ertz in trade with Eagles
What happened to J.J. Watt? Why will he not play against Packers tonight?
Cardinals down 3 assistants vs. 49ers because of COVID-19
NFL's COVID-19 numbers encouraging, soft tissue injuries up
Listen to the latest songs, only on JioSaavn.com