Nick Kyrgios injury update: The Australian tennis star pulled out of the Wimbledon warm-up matches casting doubt over his return at the Grand Slam this month. 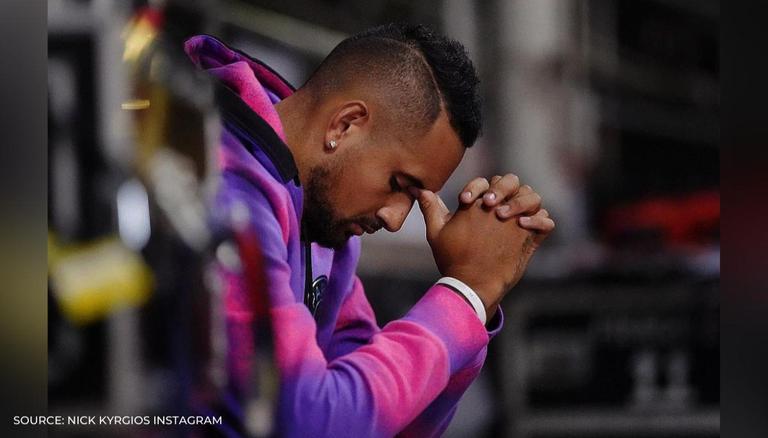 Tennis star Nick Kyrgios has pulled out of next week's Queen's Club Championships grasscourt event due to neck problems, raising doubts about the Australian's participation at Wimbledon later this month. The 26-year-old was due to make his return on the grass after staying at home following the Australian Open and skipping the clay season entirely. On Monday, Kyrgios took to Instagram to reveal that he plans to return to action only once he feels he could make an impact on the tour.

Earlier this week, Nick Kyrgios announced that he won't be taking part in the Queens Club Championships grasscourt event next week due to "uncomfortable pain" in his neck. On Instagram, he wrote, "My tennis family, I'm sorry my return has been pushed back as I am having some uncomfortable pain in my neck at the moment." Kyrgios also added that he wasn't able to serve to the best of his potential and will only make his comeback when he feels he can make an impact. "I'm trying to get on top of it but as I can't serve 100% I will only be returning when I feel I can make a full impact on the tour," he added.

By pulling out of the Wimbledon warm-up matches, Kyrigos has cast doubt over making his comeback at Wimbledon 2021. The Queen's Club Championships run from June 14-20, with Wimbledon beginning at the end of the month. Kyrgios, who has played just two tournaments since February 2020, was replaced in the draw by Spanish veteran Feliciano Lopez.

Kyrgios reached the Wimbledon quarter-finals in 2014 after the Australian, who was ranked 144th at the time, beat world then-world No. 1 Rafa Nadal. The six-foot-four star has a racked up a total of 165 wins under his belt since turning professional in 2013 and it tipped as one of the most talented stars on the circuit. However, Kyrgios is yet to win a Grand Slam title.

Novak Djokovic and Simona Halep are the defending singles champions.