Rafael Nadal took down Novak Djokovic in four sets beating the Serbian 6-2, 4-6, 6-2, 7-6 and advancing to the semifinal round at Roland Garros. 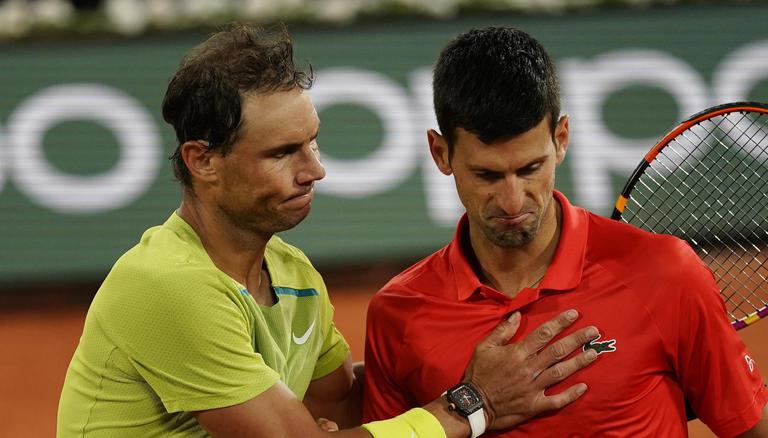 
Rafael Nadal's quest for the 14th French Open title continues after beating Novak Djokovic in the quarterfinal match. Rafael Nadal took down Novak Djokovic in four sets beating the Serbian 6-2, 4-6, 6-2, 7-6. Novak Djokovic was the defending champion and was bidding for his 21st Grand Slam trophy which would have brought him on par with Rafael Nadal. Following the exit, the Serbian was full of praise for his Spanish opponent who has an extraordinary record on the clay surface.

Novak Djokovic was playing in his first Grand Slam tournament of the year at Roland Garros after being unable to defend the Australian Open crown due to vaccination issues. The Serbian looked good in the previous matches, however, Rafael Nadal played exceptionally well and did not allow Djokovic to dominate the game. Following the loss, Djokovic hailed Nadal and admitted that the Australian Open winner only 'showed why is a great champion'.

While speaking during the post-match presentation, Novak Djokovic said “Well, congratulations to Nadal. He was a better player I think in important moments. He was just able to take his tennis to another level in those particular moments in the beginning of all sets, except the fourth".

Djokovic also suggested that, if one or two shots in the fifth set would have gone his way, then he could have forced a fifth set. He stated, “I had my chances. You know, I had my chances in the fourth. Served for the set, couple set points. Yeah, just one or two shots could have taken me into a fifth. Then it’s really anybody’s match. He showed why he is a great champion, staying mentally tough he deserved it."

READ | Novak Djokovic vs Rafael Nadal: How have the duo fared against each other in the past?

This showdown was their 59th, more than any other two men have played each other in the Open era. Nadal narrowed Djokovic’s series lead to 30-29 while improving to 8-2 against his rival at Roland Garros.In the first set, a 22-shot rally on just the second point of the match gave an early indication of what one could expect from the match. The game ended in 10 minutes with Rafael Nadal breaking Novak Djokovic.

Nadal wrapped up the opening 6-2 in 49 minutes, ending Djokovic’s run of 22 sets won. Nadal raced to 3-0 lead in the second set but Novak Djokovic bounced back to level the set at 3-3. The Serbian, however, managed to level the match after taking the second set 6-4. In the third set, Nadal raced to 2-0 lead. Following a double break, Nadal stretched his lead to 4-1 before wrapping up the third set 6-2.

READ | Nadal vs Djokovic: A look at all 9 French Open encounters between the tennis greats

The defending champion (Djokovic) then raced into a 4-1 lead in the fourth set, however, Nadal produced a stunning performance. The Spaniard first saved two set points to bring the score down to 4-5 before levelling the score at 5-5. The set later went into a tiebreaker where Nadal raced to a 6-1 lead. Djokovic saved three match points but Nadal prevailed in the end to reach the semifinal.