The Australian Government's attempt to delay Serbian tennis star Novak Djokovic's hearing in the Federal Court was quashed by the judge on Sunday. 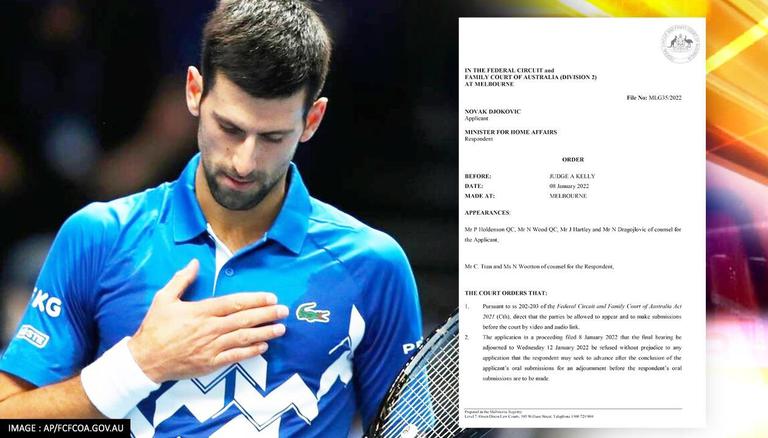 
The Australian Government's attempt to delay Serbian tennis star Novak Djokovic's hearing in the Federal Court was quashed by the judge on Sunday. On Thursday the 20-time Grand Slam champion announced that he would be participating in the upcoming Australian Open after receiving a 'medical exemption' to enter the country for not revealing his vaccination status. However, since then his visa was revoked on his arrival in Melbourne as he failed to obtain the right visa for the medical exemption that he was granted. Djokovic was held at the Melbourne airport overnight and was supposed to be 'removed' from the country later on Thursday but he decided to challenge the decision by appealing in the Australian Federal Court.

Djokovic has been allowed to stay in Melbourne and was moved to quarantine in a hotel in the city until his appeal is sorted out in the Australian Federal Court. Djokovic's case in the Federal Court was adjourned till 6 PM local time on Thursday, meaning that he would stay the night in Melbourne. It was then further adjourned until 10 AM (local time) on Monday. The Federal Court was also informed that Tennis Australia will need to know by Tuesday if the Serbian tennis star will be allowed to play in the Australian Open or not.

On Sunday, an order was published by judge Anthony Kelly, in which he rejected the move by the Australian Government to delay the hearing. The order stated: "The application in a proceeding filed 8 January 2022 that the final hearing be adjourned to Wednesday 12 January 2022 be refused without prejudice to any application that the respondent may seek to advance after the conclusion of the applicant’s oral submissions for an adjournment before the respondent’s oral submissions are to be made." The hearing is scheduled for 10 AM local time, Monday. The judge had probably kept in mind that Tennis Australia had requested to sort out the issue by Tuesday.

The Australian Prime Minister Scott Morrison tweeted that Novak Djokovic's visa had been cancelled. He then said that the border rules apply to everyone and Australia's strict border controls have been crucial to keeping their COVID death rates low. "Mr Djokovic’s visa has been cancelled. Rules are rules, especially when it comes to our borders. No one is above these rules. Our strong border policies have been critical to Australia having one of the lowest death rates in the world from COVID, we are continuing to be vigilant," Scott Morrison said in his tweet.