Novak Djokovic who is spending his third day in immigration detention was earlier sent to the Melbourne hotel after his visa was cancelled due to problems. 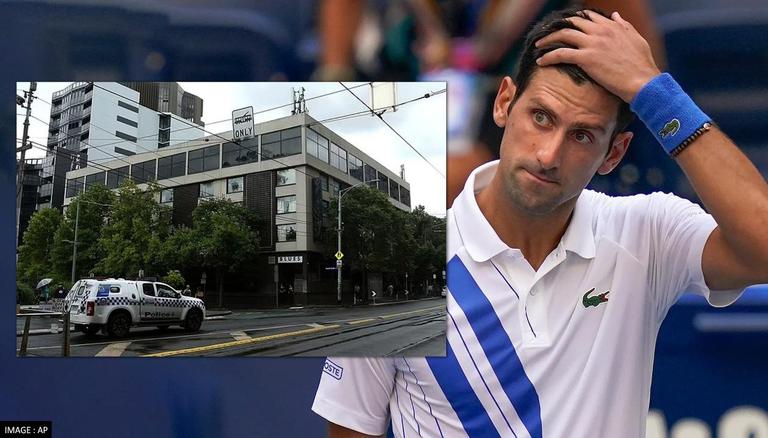 
While Tennis World No.1 Novak Djokovic continues to remain confined in the Park Hotel in Carlton, Melbourne, it is reportedly said that Djokovic has been denied any 'special treatment' during his stay in immigration custody. The world-famous tennis player, who reportedly asked for a personal chef along with access to the tennis court, has been denied these demands by the Australian Border Force (ABF), reported The Daily Mail.

He has been forced to accommodate himself along with other refugees and asylum seekers who have been living at the rundown hotel. People have complained about the poor living conditions and food quality at the facility. Some of those complaints include rotten food, maggot-ridden food, Covid outbreaks and insect infestation among others. Concerning these, the player had made a request for a personal chef since his strict diet needs gluten-free food but he was denied of the same eventually.

About his request for a tennis court, he had asked to be allowed to transfer to a rented room and continue training so that he can remain in shape ahead of the Australian Open. Even after offering to pay for all these, the requests were rejected by the Australian Border Force and they insisted that he needs to remain in the hotel until any deportation order is issued by the court.

Notably, the Serbian superstar, who is spending his third day in immigration detention, was earlier sent to the Melbourne hotel after his visa was cancelled due to problems with medical exemptions. While speculations over Novak Djokovic's COVID-19 vaccination status have been making rounds, he has not yet revealed the reasons for this exception and refuses to disclose his vaccination status as well.

Meanwhile, vaccinations are not mandatory in Australia but are required for certain activities, which may also include international games such as the upcoming Australian Open.

Djokovic's detention has sparked huge protests and rallies across Melbourne and Belgrade, while his family members have also accused the Australian government of ill-treating Djokovic like a 'prisoner' and not providing proper conditions necessary for the best sportsman.

Also, several of his fans have been agitating outside the hotel and criticised the government of curtailing the civil liberties of people on the basis of vaccine mandates.

WE RECOMMEND
'Unjabbed' Grand Slam champion to miss Australian Open amid Djokovic's status uncertainty
After Novak Djokovic, Australia cancels another tennis player's visa ahead of Aus Open
Novak Djokovic not to be deported just yet; quarantined in Australia till appeal is heard
Australia PM Scott Morrison turns commentator in Ashes despite Novak Djokovic controversy
Novak Djokovic's decision to skip ATP Cup adds speculation to his AUS Open participation
Listen to the latest songs, only on JioSaavn.com