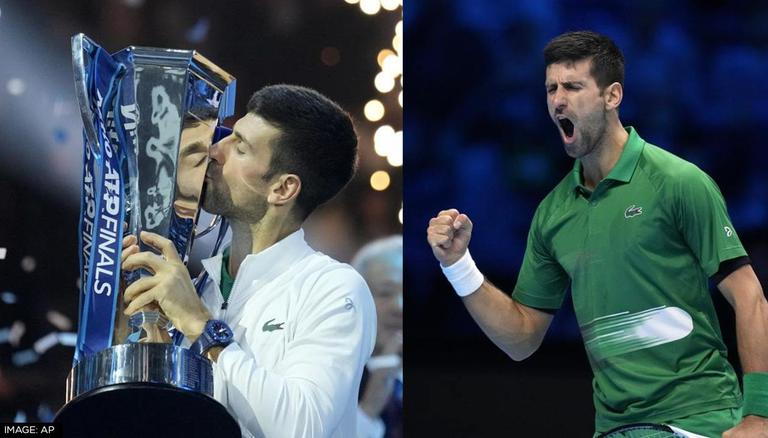 
The 21-time Grand Slam champion Novak Djokovic concluded his 2022 campaign on Sunday night with a sensational title triumph at the ATP Finals 2022. The Serbian great claimed the title at the year-end championships for the first time since 2015 after defeating Norway’s Casper Ruud by 7-5, 6-3 in the summit clash. The 35-year-old marched his way up the tennis record books with an epic victory in Turin. Here's a look at five milestones achieved by Novak Djokovic with ATP Finals 2022 title triumph.

With the 7-5, 7-6 win over Ruud on Sunday, Djokovic equaled Swiss tennis legend Roger Federer’s record of winning six ATP Finals titles. It was the fifth title win for Djokovic in 2022. Alongside his 21st Grand Slam title at Wimbledon Championships 2022, he also emerged as the winner in ATP 250 - Tel Aviv, ATP 500 - Astana, Masters 1000 - Rome and ATP Finals. Current world No. 1 Carlos Alcaraz is the only player to win five titles this season.

At age 35, the Wimbledon 2022 winner became the oldest champion ever at the year-ending champions after surpassing Federer’s record of winning the title at 30. The 20-time Grand Slam champion was 30 years old when he won his sixth and final ATP Finals titles in 2011. Djokovic previously failed to claim victories in the 2016 and 2018 finals.

Djokovic won his last ATP Finals title in 2015, which was his fourth consecutive title. While the 2022 title was his first in seven years, he picked his first-ever title at the marquee event in 2008. His victory against the Norwegian player made him the first player in tennis history to win the ATP Finals in three different decades.

The Serbian national has emerged as the title winner at least six times in six different tennis tournaments. He already leads the all-time title-winning list with 65 titles. He has now six or more in tournaments - Australian Open (8), Wimbledon (7), ATP Finals (6), Paris-Bercy (6), Miami (6), and Rome (6).

The former World No. 1 received the biggest prize money in the history of tennis with his memorable win at Turin. He received a record paycheque for ISD 4.74 million for winning the 2022 edition of the year-end championships. Earlier in the week, the current world No. 8 became the first player in history to win a total of USD 160 million as prize money in his career.