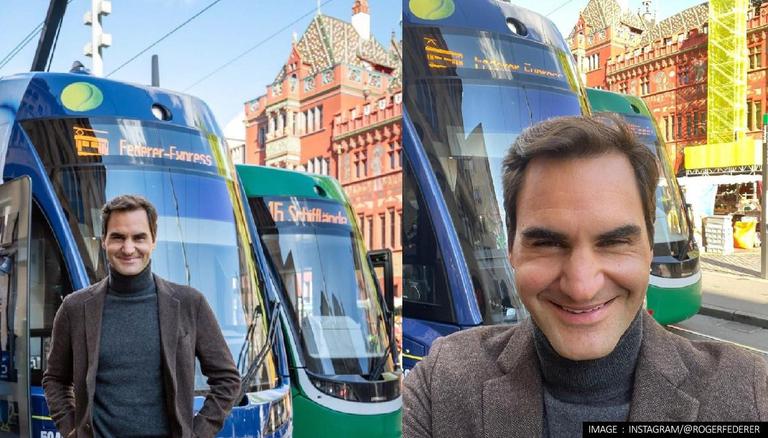 
Roger Federer is arguably the best as well as one of the most inspirational tennis players of all time with many memorable performances and accolades to his name. Federer was the first player to register 20 men's singles Grand Slam title wins when he won the 2018 Australian Open final.

It has been a while since the 'GOAT' has laid his hands on a Grand Slam but lately, he was honoured by his hometown Basel with a tram in the Swiss city being named after the modern-day tennis great.

Roger Federer expressed gratitude by taking to his official Instagram handle where he posted a few pictures and a video of the new tram service on his name, the Federer Express.

The winner of 20 Grand Slams wrote that he was hopping aboard the 'Fedexpress!' and then went on to thank everyone for the incredible honour.

"I was a boy getting to practice every day on No.8.  Dangge Basel", he added.

Last week, the 20-time Grand Slam champion Roger Federer dropped out of the top 10 in the ATP rankings for the first time in almost five years after Hubert Hurkacz climbed two spots to replace him after his excellent Indian Wells performance. Hurkacz made it to the quarter-finals of the tournament when he was defeated 3-6, 6-4, 7-6 by Grigor Dimitrov. Meanwhile, the biggest gainer in the rankings was Indian Wells winner Cameron Norrie as he gained 11 places to increase his ranking to 15.

The Indian Wells result meant that Federer dropped outside the top 10 for the first time since January 2017 when he won the Australian Open. Meanwhile, the 40-year old Swiss maestro has not played in a competitive match owing to a right knee injury since his defeat to Hurkacz in the Wimbledon quarter-finals in July as a result of which he ended up missing the Tokyo Olympics 2020 and the subsequent US Open

It is to be noted that the Australian Open 2018 was the last time when Roger Federer had won a major silverware on the tennis court. The Swiss icon has managed to reach the knockout stages since then but could never succeed in going all the way.  He is currently tied with long-time rivals Novak Djokovic and Rafael Nadal with 20 Grand Slam titles.

Roger Federer, who is one of four players to have won a career Grand Slam on three different surfaces, hard, grass, and clay courts would now be looking forward to staging a comeback at Australian Open 2022 in January and clinching a record 21st Grand Slam.