Stefanos Tsitsipas will go up against Daniil Medvedev in the second French Open 2021 quarter-final. Here are the Tsitsipas vs Medvedev live stream details. 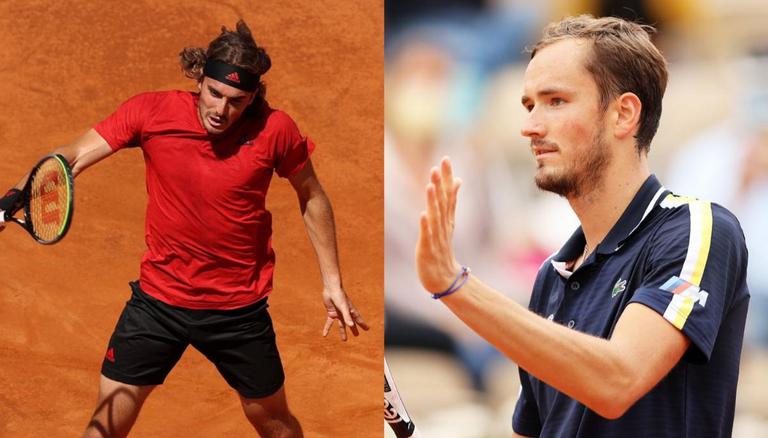 
World No.5 Stefanos Tsitsipas will go up against World No.2 Daniil Medvedev in the second French Open 2021 quarter-final. The match is scheduled to begin at 12:30 AM IST on Wednesday, June 9 (June 8, 9:00 PM local time) from Court Phillippe-Chatrier. Here are the Tsitsipas vs Medvedev live streaming details, how to watch French Open 2021 live in India, the Tsitsipas vs Medvedev prediction and the head to head stats for the match.

Who advances to the #RolandGarros semifinals? 🤔 pic.twitter.com/4oqtgQmiwG

The highest-ranked of the four French Open 2021 Men's singles quarter-finals, the Tsitsipas vs Medvedev game will start off the second bracket of the draw. It's been an extremely impressive year for Tsitsipas, who started off his season with back to back semi-final runs at the Australian Open and the ATP Rotterdam. A finals appearance at the Mexican Open and another QF at Miami led to Tsitsipas's first title of the year at the Monte Carlo Masters. He is coming into this slam with a final at Barcelona and a title win at the Lyon Open.

Not unlike Tsitsipas, Daniil Medvedev has had a breakthrough since his back to back wins at the Paris Masters, Nitto ATP Finals and the ATP Cup. Runner up at the Australian Open this year, winner at the Open 13 and quarter-finalist at the Miami Open, the Russian has climbed to the second spot on the table, overtaking Rafael Nadal and even possibly Novak Djokovic if he makes it to the finals of the French Open. While his past record at the Slam - four Round 1 losses in a row - is unimpressive, Medvedev's run this season has been near perfect, making this encounter a very interesting one.

French Open live stream in India? Where to watch Tsitsipas vs Medvedev live

This will be the eighth career singles meeting between Stefanos Tsitsipas and Daniil Medvedev. While the current Tsitsipas vs Medvedev h2h record stands at 6-1 in favour of the Russian, clay courts have not been his friend. Tsitsipas, meanwhile, has made the surface his strength over the years. However, the one match between the two that took place on clay - at the 2019 Monte Carlo Masters went Medvedev's way in three sets. Tsitsipas' sole win over the No.2 came in 2019, at the Nitto ATP Finals. Their last meeting was at the Australian Open semi-final this year. Medvedev won in straight sets.

This will be a difficult game to predict. While Tsitsipas, on one hand, is the more natural clay-court player, Medvedev, who has generally struggled at Roland Garros, has made it known that he will not go down easy this year. In the end, it will come down to who is having the better day. We predict a tough five-setter, probably going in favour of Medvedev.