The Olympic gold medalist for the US Gable Steveson, who was roped in by WWE earlier in September this year, explains how Brock Lesnar inspired him to join WWE. 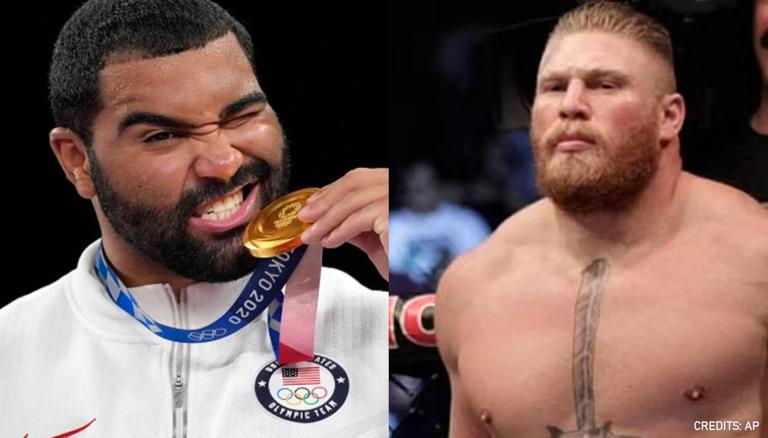 
The Tokyo Olympic gold medalist for the US in the men’s freestyle 125 kg category, Gable Steveson admits that WWE Superstar Brock Lesnar drove him towards the idea of joining pro wrestling. During a conversation with Ariel Helwani on his show, The MMA Hour, Steveson explained how Brock Lesnar influenced him to join WWE. He also revealed during the conversation that he has signed a three-year deal with the wrestling company which kicks in as soon as he graduates in May next year from the University of Minnesota. He will defend his NCAA Division I championship in the heavyweight category as he now has the access to the WWE Performance Center in Orlando.

Just like Steveson, his motivation for joining WWE, Brock Lesnar has also competed at Minnesota and won a national championship. While expressing his views on the MMA Hour, Steveson said, “Besides talking to guys like Lesnar and Triple H and such, I haven't actually talked to another collegiate wrestler in WWE…(Brock) was a good part [of the decision] because the Brock Lesnar path, like we talked about, he started with WWE and went to the NFL and made it to the final stages of being on the team, then went to UFC. So, I mean the Brock Lesnar route is helpful for me, and I want to pave my own way and have my own destiny. He was a big help in this, and it was cool that he gave me some guidance”.

I’ve been on WWE since I was really young: Gable Steveson

Earlier in the month after coming off as a hot commodity from the Tokyo Olympics 2020 and joining WWE, the 21-year-old spoke about his decision to join WWE. As reported by ESPN, Seteveson said that he has been on WWE since the time he was really young. He added that he was into guys like Brock Lesnar and Paul Heyman and after growing up watching them, he felt like WWE was the right choice, as he is an entertainer on the wrestling mat. In the Tokyo Olympics 2020, Gable defeated three-time and reigning World Champion Geno Petriashvili in the men’s freestyle 125kg category finals to clinch the gold medal for the US. Earlier in the tournament, he defeated the defending Olympic champion Taha Akgul. He is also the reigning NCAA Division I National Champion.