The Tokyo Olympic gold medalist in the Men's freestyle 125 kg category, Gabe Steveson was roped in by the WWE. He spoke about his feelings upon joining WWE. 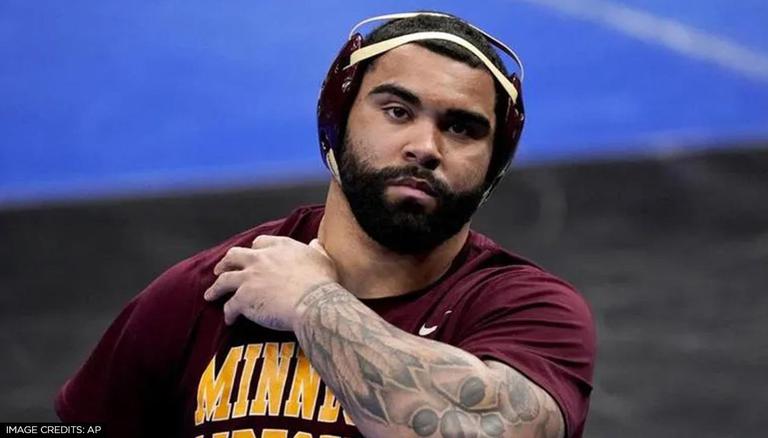 
American heavyweight wrestler, Gable Steveson, who won the gold medal in the Men’s freestyle 125 kg category of the Tokyo Olympics 2020, has been roped in by WWE in a multi-year deal. As per the NIL deal signed with WWE, the 21-year-old wrestler will be allowed to attend the University of Minnesota for his senior year and defend the NCAA Division I championship in the heavyweight category. As reported by ESPN, his multi-year contract will commence after he graduates in May as he’ll now have the access to the WWE Performance Center in Orlando, Florida. Once he graduates, he will be a full-time performer with WWE.

As first reported by @ESPN, WWE has announced the signing of Olympic gold medalist and reigning NCAA wrestling champion @GableSteveson to an exclusive agreement! https://t.co/KWRnei182f pic.twitter.com/4gowLEhzIT

As soon as WWE announced Stevenson, reactions stating him as the next Kurt Angle started popping up all over social media. He is the first gold medalist since Kurt Angle to be associated with WWE. In a tweet posted by Steveson on Friday, he reacted to his similarities with Kurt Angle, by saying that he is not the next Kurt Angle. He is Gable Steveson. He ended the tweet by asking Twitter users to enjoy the show. Kurt Angle is also an American wrestler who won the gold medal at the 1996 Atlanta Olympics Games.

READ | WWE NXT: More releases could be on the cards after Vince McMahon takes over, says report

I’m not the next Kurt Angle.. I’m Gable Steveson.. Now, Please Enjoy The Show.. Thank you! 🍿

As per ESPN, Steveson was in talks with the UFC and also saw a possible career opportunity in the NFL. He is being considered a hot commodity coming off fresh from an Olympic gold-medal win at Tokyo. In a conversation with ESPN, Steveson said, “I've been on WWE since I was really young. I was on guys like Brock Lesnar and Paul Heyman for a very long time. So growing up watching them, me being an entertainer on the wrestling mat, it just felt like it was the right choice."

READ | Who will John Cena face next? 16-time champion returns at this week's WWE SmackDown

Steveson further explaining his decision to chose WWE, said, “Being able to learn how to take bumps and with the wrestling background I have right now, I think I can adapt to all of it really quick. I think with the charisma and the confidence and attitude that I bring to the wrestling mat, it will translate over to the WWE really fast, and I feel that I can ... go on screen and have a good role and know what to do perfectly”. He looks forwards to play against WWE star Brock Lesnar, who like Steveson, won the national championship at the University of Minnesota.

READ | 'Escape The Undertaker': WWE's film starring The New Day to stream on Netflix from Oct 5