Brock Lesnar was suspended for an indefinite period of time after he went on a rampage of WWE SmackDown after his loss to Roman Reigns at the Crown Jewel 2021. 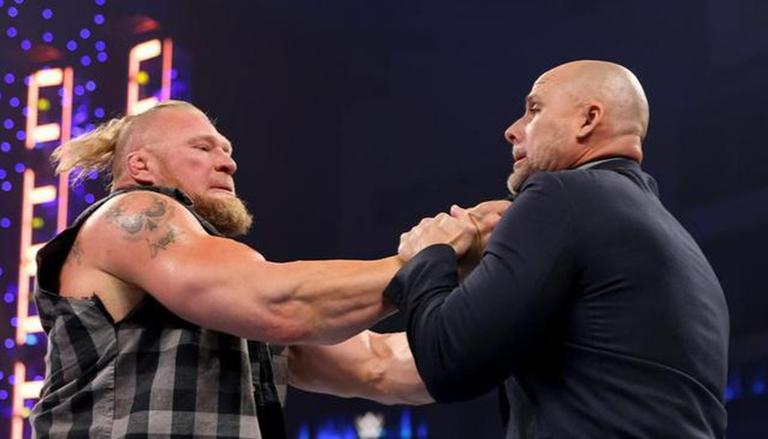 
WWE superstar Brock Lesnar’s indefinite suspension storyline continued at the WWE Survivor Series 2021, as the show host Kayla Braxton was seen asking Roman Reigns’ manager Paul Heyman about the Beast Incarnate. Lesnar was earlier suspended for an indefinite period of time, after he went on a rampage at WWE SmackDown’s episode on October 22, following his defeat to the universal champion Roman Reigns at the Crown Jewel 2021. Meanwhile, during the Survivor Series PPV on Sunday, Braxton asked Heyman about the rumours that have been going around, about Lesnar’s suspension not being indefinite any longer.

Replying to Braxton in the back-stage segment, Heyman said that the question about the rumours should be asked to Adam Pearce as he has problems with Lesnar. Earlier during the WWE Smackdown show on October 22, Lesnar orchestrated brutal attacks on Roman Reigns, The Usos, match referees, and other wrestlers, before attacking Adam Pearce, following the announcement of his indefinite suspension. Later Pearce announced that a fine of USD 1 million has been handed over to Lesnar, along with the indefinite suspension.

During the Survivor Series 2021, WWE didn’t provide any direct updates about Lesnar’s suspension storyline, however, they did say that there were rumours about the suspension no longer being indefinite. Heyman was also approached by Megan Morant, during Sunday’s PPV, where the question about Lesnar’s suspension was again faced by Heyman. As per Wrestling Inc., despite no major updates, fans are expecting to see Lesnar on SmackDown’s FOX show on December 10 at the Staples Center.

Will Brock Lesnar return to WWE SmackDown on December 10?

It was earlier announced by the Staples Center on November 11 that Lesnar had vowed to buy a ringside seat at the Staples Center. However, WWE never announced this officially, but Staples Center is still live with their announcement. If Lesnar doesn’t return on the SmackDown show of December 10, he can be expected to make a return during the 2022 Royal Rumble. Lesnar is being advertised for the WWE Royal Rumble 2022 pay-per-view, which takes place from The Dome at America’s Center in St. Louis on January 29.