A new flaw in Truecaller could compromise the account security of millions of users. Discovered by security researcher Ehraz Ahmed, it could allow an attacker to access virtually any Truecaller account. If exploited, it could also allow an attacker to access user accounts on popular third-party apps that use TrueSDK for one-tap signup with Truecaller's phone number verification system. Popular apps like Shopclues, Oyo, Grofers and Myntra use TrueSDK.

Ahmed said the vulnerability was limited to Truecaller's call number verification system that could be exploited by making a spoof call at the time of signing in to a Truecaller account. One could exploit the flaw by simply making a spoof call from a Truecaller verification number onto the phone with Truecaller installed, irrespective of the Truecaller account they may be trying to access at the time of logging in. Ahmed demonstrated the flaw by sending out a few messages on Truecaller Chat from an invalid phone number that used to be Airtel's official prepaid customer care number: 9845098450.

Ahmed also sent a message from a number that is still supposed to be an official customer care number of Vodafone 4G. 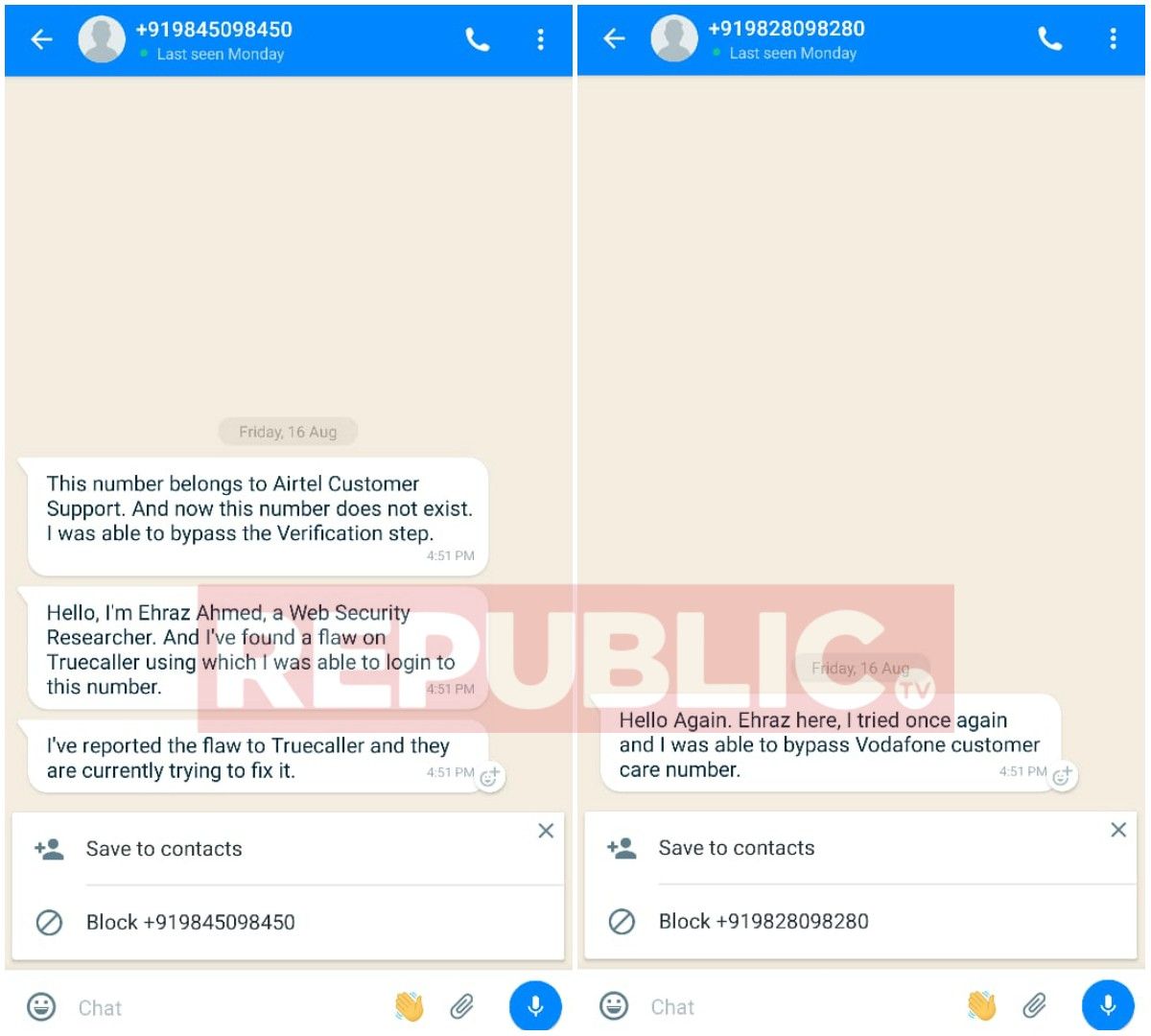 READ | Truecaller users beware! Your personal data including name and phone number may be accessible to third-parties

In an email statement to Republic World, Truecaller said it investigated the issue with the security researcher and the flaw was not reproducible.

Did it put Truecaller's UPI payment feature at risk?

Ahmed explained the issue did not pose any danger to Truecaller UPI payment method. For UPI sign up, an SMS is sent from the actual number to the bank. However, since attackers couldn't bypass OTP verification unlike call verification, it did not allow unauthorised signup to Truecaller's UPI payments.

Truecaller has more than 100 million active users in India.

WE RECOMMEND
11 months ago
Truecaller users beware! Your personal data including name and phone number may be accessible to third-parties
10 months ago
Truecaller clarifies on UPI payments bug once again, says it affected less than 0.12% monthly active users in India
11 months ago
Truecaller fixes critical payments flaw after automatically signing up users to its UPI service, says 'we are sorry'
11 months ago
12-yr-old Revant comes out with innovative solutions for traffic rule violators; files for 4 patents
1 year ago
New Google Play Store rules to redefine how apps use Android’s call log and SMS permissions
LATEST NEWS
View all
3 hours ago
What is Cheez App? Which country is Cheez App from? Know details here
1 day ago
Will Chinese phones be banned in India? List of Top 11 Chinese smartphones
21 hours ago
Is AliExpress banned in India? Know about its origin country and other details