Shein Breaks Silence On Being Banned In India; Says It's Preparing Compliance Documents

China-based online e-commerce website Shein issued its first statement to its erstwhile India users on Wednesday after being banned by the government along with 58 other Chinese applications. In its statement, Shein said that the company is working hard on “preparation and submission of relevant documents required by Indian Government to comply with the new policies". Stating that customer privacy is its top priority, Shein assured to comply with all security requirements of customers around the world.

READ | TikTok Clarifies It Has 'no Plan' To Pursue Legal Action Against Govt, Issues Statement 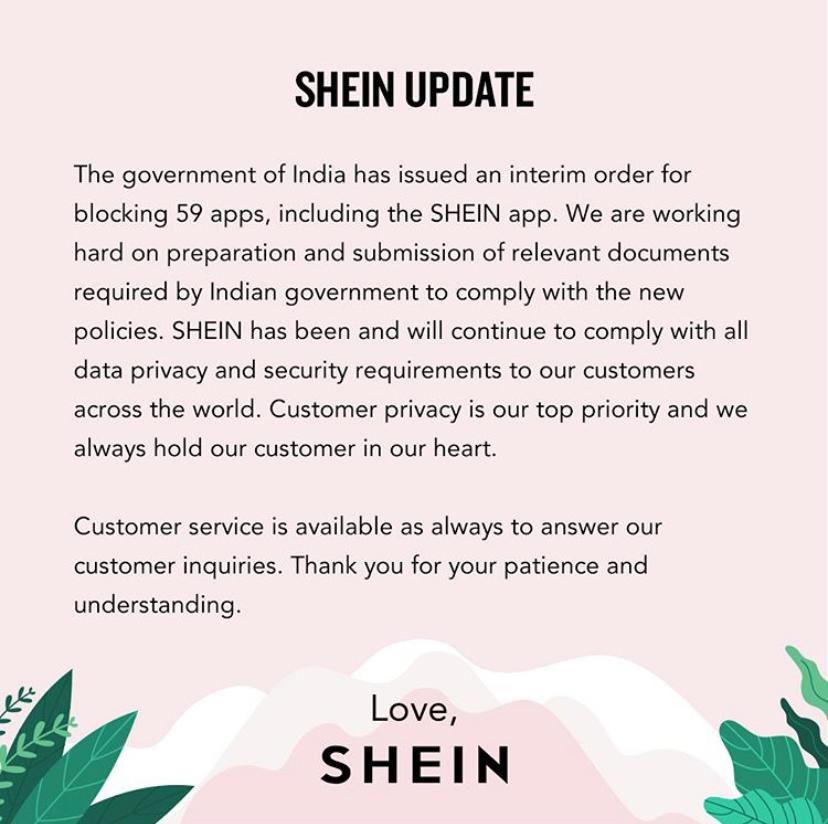 Shein's response to Indian government was similar to that of Tiktok, though many days later. Within hours of being banned along with 58 other China-origin apps, Nikhil Gandhi, Head of TikTok India, said that the app was in the process of complying with the government's 'interim order'.

"We have been invited to meet concerned government stakeholders for an opportunity to respond and submit clarifications. TikTok continues to comply with all data privacy and security requirements under Indian law and has not shared any information of our users in India with any foreign government, including the Chinese government," the statement reads.

"Further we are requested to in the future we would not do so. We place the highest importance on user privacy and integrity," it added.

On June 29, the Central government had banned 59 Chinese applications including the popular Shein, Tiktok and UC Browser on grounds of privacy concerns. The Centre stated that it received many complaints from various sources about misuse of these apps for stealing and surreptitiously transmitting users’ data in an unauthorized manner to servers which have locations outside India. In a move to protect the sovereignty of Indian Cyberspace and to ensure the interests of crores of Indian mobile users, the government said that this was a major blow to China’s Digital Silk Route ambitions.