The Microsoft Surface Neo two has been spotted twice, in a movie and in a series. While the movie was launched recently, the series was launched this year. 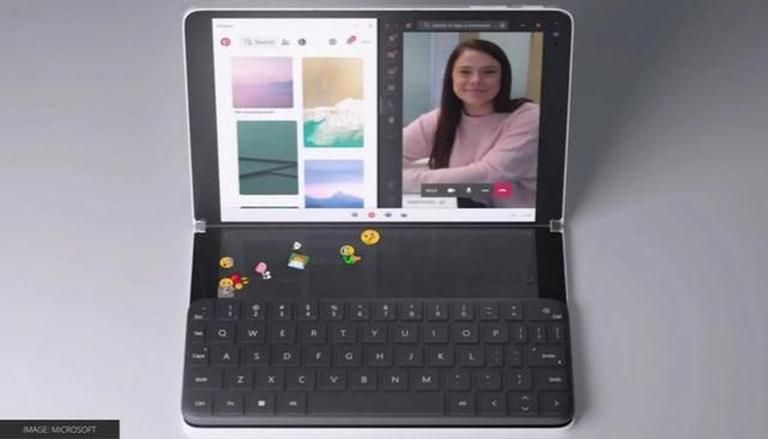 
The Microsoft Surface Neo has long been in development by the manufacturers. While there are no official details about the public launch of the device, it has made yet another appearance online. A dual-screen smart device by Microsoft, Surface Neo has been spotted in a new Netflix movie called Red Notice which stars Dwayne Johnson and Ryan Reynolds. The movie was released globally on November 12, 2021.

For those catching up, the device was announced by the Redmond-based tech giant back in 2019. While it has been more than two years since then, there is no word on the official Microsoft Surface Neo release date. It is important to note that the Surface neo was announced with Surface Duo, and the company is rumoured to be working on the second iteration of the latter. While the recent appearance in a popular movie does indicate that the device is still in the works and Microsoft has not forgotten about it, the commercial release is unknown.

Previously, the Microsoft Surface Neo was spotted in an episode from the successful series by Marvel, Wanda Vision. A tweet by Zac Bowden who was been following the device since its announcement says that the series was shot before the device got delayed. Building upon that, Bowden said that Microsoft and Marvel might have some product placement deal in place, wherein the devices are made available to the production house before they are available for the rest of the world.

READ | Snipping Tool not working in Windows 11? How to fix Snipping tool error on Microsoft's OS?

am i the only one who noticed a @surface Neo on the latest episode of #WandaVision @windowscentral @zacbowden pic.twitter.com/kYjkgotT5q

Breaking down the situation, the most plausible explanation to it is that the movie and the series were shot before the pandemic broke out. As the shoot and the announcement of the product might have been closely conducted, featuring Microsoft Surface Neo is them must have been away for marketing the device. However, since the movie and the series got delayed due to the global lockdown and have been released lately, it looks like the product is still in the works.

Most recently, Microsoft Surface Duo 2's specifications have appeared online on the Geekbench benchmarking site. As per the revelations, the smartphone is expected to see some new features and improved performance. The Surface Duo 2 is the successor of the dual-screen device launched by Microsoft last year and has appeared on Geekbench more than a dozen times in the past few days.

WE RECOMMEND
Netflix is ready to serve 'Red Notice' in the latest trailer; Watch
Microsoft to hold 'Education's Reimagine' event on November 9, 2021: What to expect?
'Red Notice': Ryan-Dwayne's film breaks Netflix's record; gets 'biggest opening day' title
Will 'Red Notice' be renewed for sequel? Here's everything we know so far
'Red Notice': Are Cleopatra Eggs real? Know true story behind the bejewelled eggs
Listen to the latest songs, only on JioSaavn.com