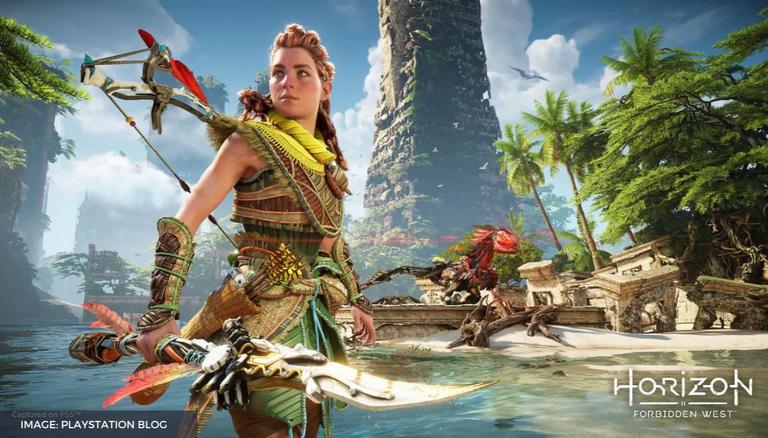 
PlayStation revealed the Horizon Forbidden West gameplay on May 28, 2021, during the PlayStation State of Play. Coming as a sequel to Horizon Zero Dawn, the game features stunning visuals set up in the post-apocalyptic world. However, some fans do not like how Aloy looks in the reveal and are debating all over social media platforms. In particular, it is Aloy’s face that is being debated upon. Keep reading to know more details.

As the gameplay was revealed, some fans took to social media to express the ‘less feminine' features of the character Aloy. Several images comparing Aloy’s face from Horizon Zero Dawn and Horizon Forbidden West have come up. While some fans are arguing that the main protagonist’s looks have changed, some say it is a mere consequence of PlayStation 5 lighting and camera angles.

A tweet by ApexAphaJ turned a lot of eyes on social media platform Twitter, resulting in a backlash among Horizon Forbidden West fans. The tweet says that Aloy lacks ‘feminine features’ and looks like ‘The Last of Us 2’s Ellie.’ However, there are people who claim that only minimal changes are done to the character, giving her a more natural look that completely suits the post-apocalyptic setting of the game.

READ | Best armour in Horizon Zero Dawn that you must check out; see list

Is it me or Sony be making their lead female protagonist look masculine as hell..barely no curves or rough non feminine features..Unlike the average woman. Like *cough cough..TLOU2’s Ellie…etc. Just saying #My2cents
Pic from the game on the left, fan made on right. Hire fans lol pic.twitter.com/S1tLnmO7l6

I think that's just a very unflattering angle, she looks pretty fine here. Not exactly your valley girl but she's got a sort of homeliness that fits the techno cavewoman aesthetic. I personally would add some warpaint to spice up the design but I think you're really reaching. pic.twitter.com/G7nE75Anhr

So a badass guerrilla fighting warrior needs to get *dolled up* to do her job? That’s a weak take broski. Just jumping into the water would melt off the makeup. She’s wearing practical-ish combat clothing. Guess what, she probably isn’t shaving much either, or using deodorant!!! pic.twitter.com/S3tPUYOCPG

A lot of readers want to know who plays Aloy in Horizon Zero Dawn. The answer to that question would be Ashly Burch, an American voice actress and writer, who will also voice the character in the upcoming sequel. Developed by Guerilla Games, Horizon Forbidden West would be coming to PlayStation 5 soon. As of now, there is no word on Horizon Forbidden West release date. Besides, Sony previously claimed that the game would be available on PlayStation 5 by the end of 2021, following which there would be a launch on PlayStation 4 too.

In the recent State of Play, the developers boasted life-like graphics, comprehensive combat controls and a pinch of the storyline. The characters in the game, such as mechanical animals, or even Aloy herself are very well detailed. The character has expertise in archery, and other survival skills, around which the whole story revolves. The complete reveal uploaded by Sony is added hereby.

READ | Is Horizon Zero Dawn free? Know all about the Sony and Guerrilla game's release

READ | Horizon forbidden west: The sequel to Horizon zero dawn to be released soon in 2021
READ | Where does Horizon Zero Dawn take place? Here's everything you need to know
First Published: 1st June, 2021 13:36 IST
SUBSCRIBE TO US

WE RECOMMEND
Where does Horizon Zero Dawn take place? Here's everything you need to know
Horizon forbidden west: The sequel to Horizon zero dawn to be released soon in 2021
Uncharted 4 for PC: The final entry in the uncharted series to release on PC soon
Is Horizon Zero Dawn free? Know all about the Sony and Guerrilla game's release
Fortnite Aloy Cup: Get the Aloy Bundle early through this Fortnite tournament