YouTube star Dan Avidan has landed in hot waters after "grooming of minor" allegations have surfaced against him. Find out who is Kati Schwartz.

Recently, shocking news surfaced about YouTube star Dan Avidan. A viral Reddit thread showed alleged conversations that the Game Grumps host was having with his younger female fans. The conversations were sexual in nature and left many of his viewers shocked. Since then a number of people, especially girls levelled “grooming” allegations against Avidan, the most notable one being Kati Schwartz who used to be his close friend. Find out what transpired between the two.

Who is Kati Schwartz?

Many internet users might already know that this isn’t the first time that such allegations have been levelled against Dan Avidan. According to a report in Gamerant.com, in the past, the 42-year-old musician and YouTuber has been accused of sexting and then ghosting several of his young female fans. However, one of the most prominent accusations came from Kati Schwartz.

READ | YouTube Space Bar not working? Learn how to easily solve this issue

The report reveals that Schwartz wrote a play named Bad People and had a character in it which was based on Avidan. She later stated outright that Dan was predatory in nature and was dangerous to his female fans. The accusations came as a shock to many but sexual misconduct allegations have been rampant in the gaming industry for some time now.

A Reddit post made by user “Special Amphibian” a year ago, revealed that Kati worked as Dan’s personal assistant and was also featured in some Ninja S*x party videos (Ninja S*x party is a musical comedy duo that includes singer Dan and keyboardist Brian Wecht). Schwartz went on to create the play Bad People based on her experience of the #Metoo movement. The reveals many intimate details about her alleged relationship with Dan which ended in Dan ghosting on her while dating several other women.

READ | DYK Justin Bieber is a huge fan of Chuck Norris and enjoys watching his videos on YouTube? 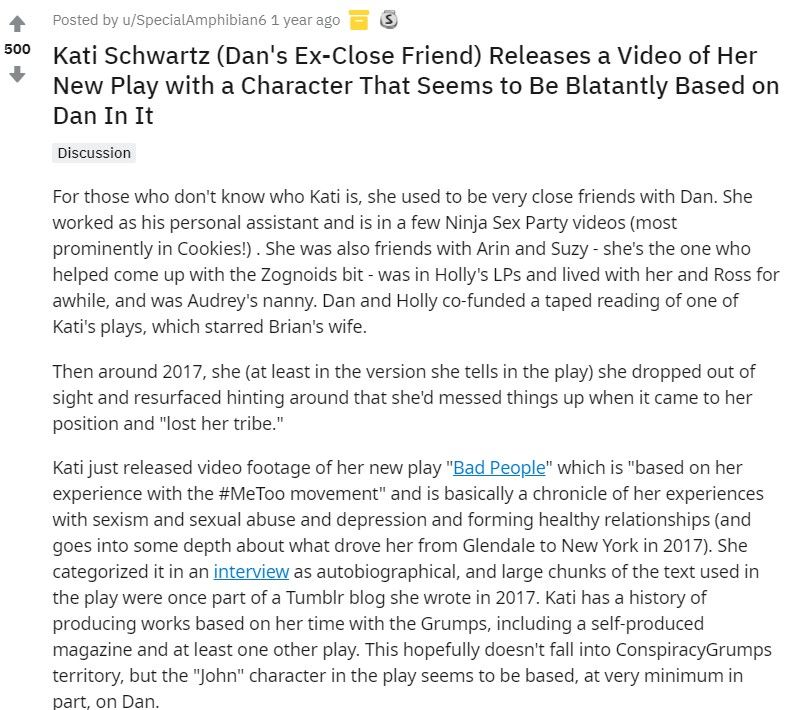 The disturbing details of the play are mentioned in the Reddit post. Many fans on Reddit commented on the post with one user writing, “It's pretty easy to be a nice, likeable person in public or on camera, but do really scummy things to a significant other. You hear plenty of stories about abusive relationships that go on for years with no one realizing it because the abuser is such a nice person to other people.:”

Another user named FatherofTheEVs stated, “I think the Dan controversy is less of an issue regarding age and more of an issue regarding the treatment of women and an abuse of power”. The user further stated, “In my personal opinion, if Dan was intentionally and actively going out of his way to groom minors, then he and this fan would have f***ed when she was 18, and not 22. The situation may change if more evidence comes to light, but with the information provided it seems like there is no proof of illegal or even morally wrong activity regarding minors”. 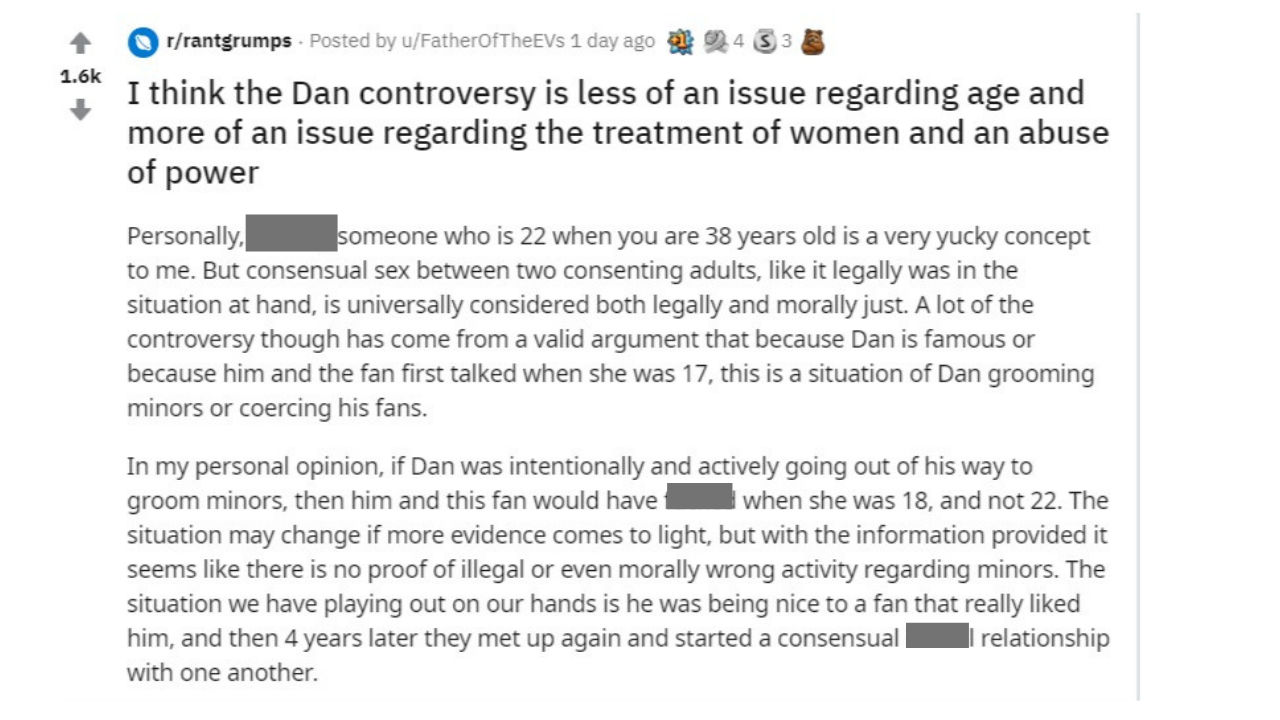