Apple's iOS 13.5 is the new beta update available for users who has participated in the program earlier. Here is all about the new iOS update and what's new.

Apple's new software update for all its products has been making a lot of news. The organisation started rolling out the Golden Master (GM) version of iOS 13.5, iPadOS 13.5, watchOS 6.2.5 and tvOS 13.4.5 for beta developers.

According to the reports, the iPhone seller has provided more than 4 updates to the beta developers to test the iOS 13.5 update. These GM versions are readily available to be installed through the Apple Developer Center or as an over-the-air update. However, the update is only available for developers who participated in the beta-testing program.

Also Read | Is Apple considering a massive shift of iPhone manufacturing from China to India?

Apple has started rolling out the much-awaited iOS 13.5 Beta to the developers

The new iOS 13.5 Beta update has revealed that the new operating system update has made Face ID recognition faster and more precise in comparison with previous updates. This iOS update makes it easier for users to unlock their phones when they are wearing a face mask.

The company's notes about the update read, "iOS 13.5 speeds up access to the passcode field on devices with Face ID when you are wearing a face mask and it introduces the Exposure Notification API to support COVID-19 contact tracing apps from public health authorities. This update also introduces an option to control automatic prominence of video tiles on Group FaceTime calls and includes bug fixes and other improvements." 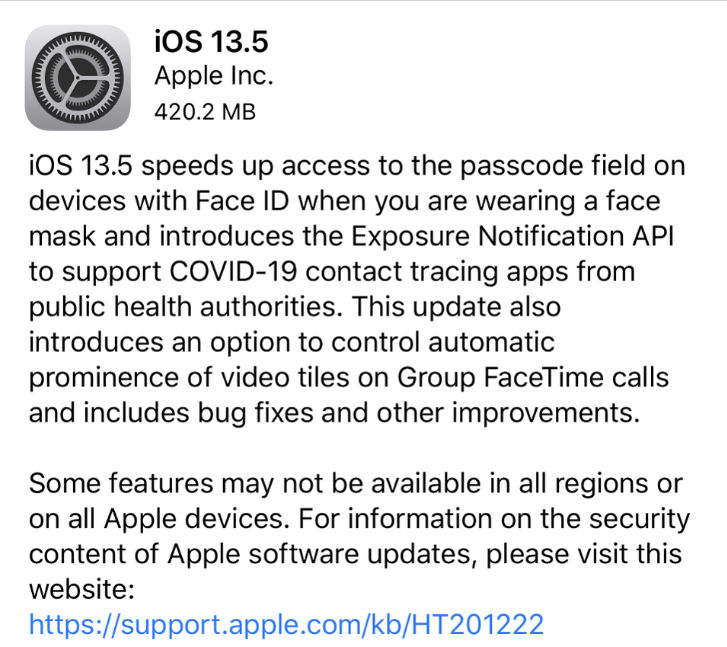 As per the reports, when you are wearing a face mask the passcode field will automatically be displayed after a user swipes up from the bottom of the lock screen. However, it is said that it will also work while giving authentication with the App Store, Apple Books, Apple Pay, iTunes, and other apps that support signing in with Face ID.

Apart from the face ID, the new iOS 13.5 update also has support for COVID-19 contact tracing apps which allows users to freely use coronavirus tracker apps effectively. Moreover, the update also brings an option to automatically share health and other required information from your Medical ID with emergency services when you place an emergency call.

The iOS 13.5 beta version also provides developers with an option to control automatic prominence on Group FaceTime calls so video tiles do not change size when a participant speaks.

As pointed out by @Sonikku_a2, if you’re wearing a mask, iOS 13.5 goes straight to the passcode screen if you try to unlock with Face ID (keypad not shown because iOS hides it in screen recordings) pic.twitter.com/bQCzu5u20p

Many tech enthusiasts are expecting Apple to release at least one more beta version of iOS 13.5 before the public release to everyone. However, previously they expected iOS 13.5 to be released alongside the exposure notification API in mid-May, given the beta testing goes according to plan. But, it seems that the iOS 13.5 may be available only by the end of May or June first week.