The Honor 9X does stand out where it can but is it enough to make you want to pick this one up over a Xiaomi, or a Realme, or a Vivo, or a Samsung phone?

Huawei offshoot Honor has been consistent with its budget X-series in India since day one. The Honor 4X was one of the best ‘value for money’ phones you could get back in the day. The Honor 5X that followed was a good upgrade over its predecessor, especially in the design and make. The Honor 6X got you dual rear cameras. The Honor 7X got you a much bigger screen with slimmer bezels. With the Honor 8X, Honor went back to the drawing board and gave buyers, a flashy new gradient finish.

All in all, design and cameras have been the main takeaways from ‘all’ Honor X-series phones – to this day. Suffice to say that the newly launched Honor 9X takes that legacy forward, with a superior design and potent cameras. Honor has launched the Honor 9X in India at a starting price of Rs 13,999 for the base model with 4GB RAM and 128GB storage going all the way to Rs 16,999 for the top-end model with 6GB RAM and 128GB storage.

So, what does that kind of money get you?

That’s not bad at all. But here’s the thing. It’s 2020 and the under Rs 20,000 price segment in India isn’t really what it used to be, say a year or two ago. It’s far more competitive and therefore making your product stand out isn’t easy. The Honor 9X does stand out where it can but then, is it enough to make you want to pick this one up over a Xiaomi, or a Realme, or a Vivo, or a Samsung phone in its segment? We find out. 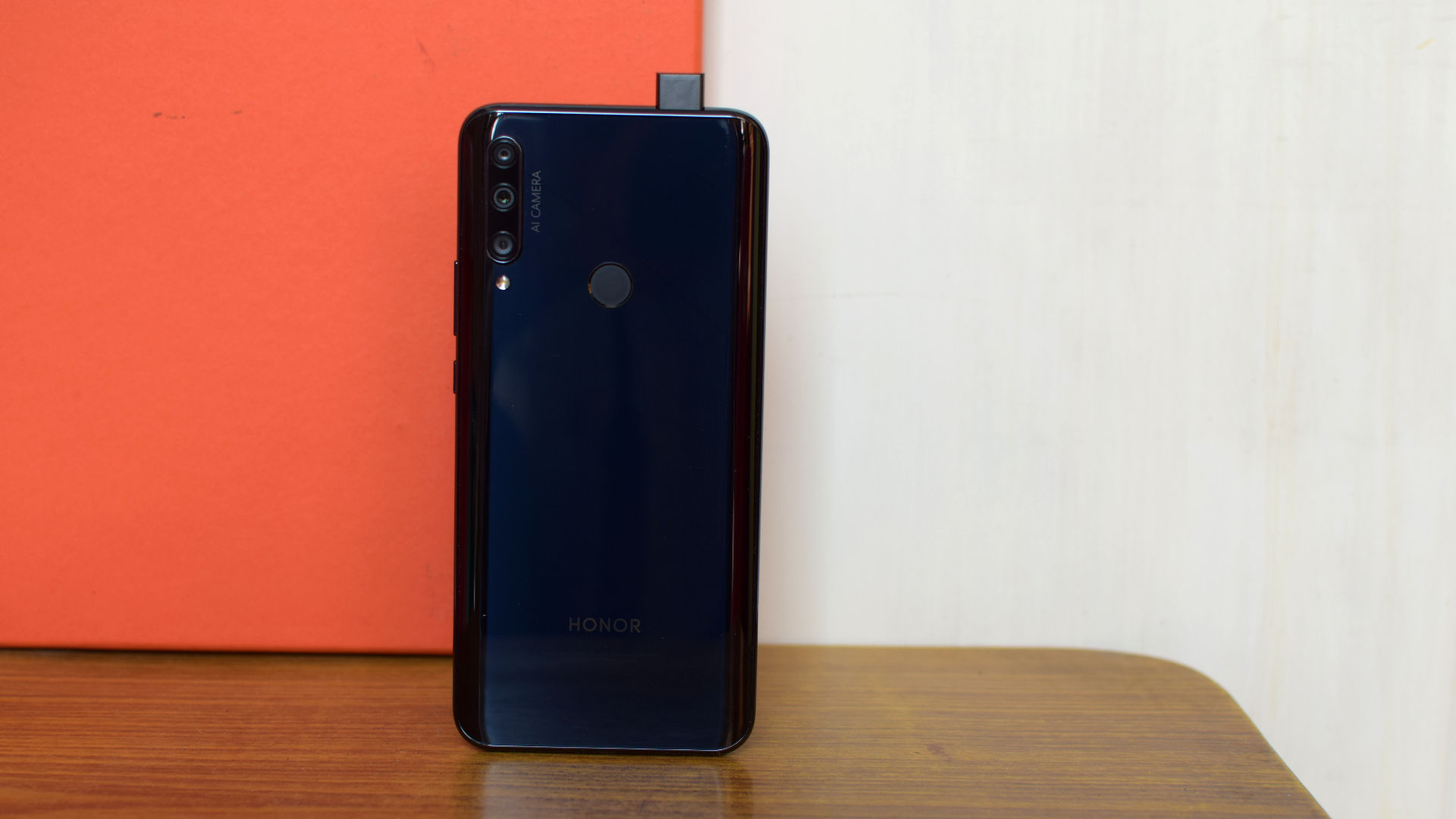 Honor makes some good-looking phones. The Honor 9X is also a good-looking phone. It comes in two colorways meant for two very different kinds of people. There’s the midnight black, that I have for review, that’s sort of like any other glossy black phone in the market today. This one’s for someone who likes things plain and simple. Then there’s the sapphire blue option. That’s the one you would want to get if you like all things bold and flashy. This one also offers some visual identity of its own with its distinct X-shaped patterns on the rear panel – in a sea of fancy color shifting phones. It’s good to look at but then again, it’s not for everyone. The depth inducing sapphire blue colorway of the Honor 9X has one clear advantage though. It does not show as many smudges and fingerprints (as the black).

On the inside, it is all plastic. It doesn’t look or feel that way, somehow, because this thing weighs quite a bit and is solid to hold on to, but make no mistake, it’s all plastic. Honor has done a good job in color coating the sides to match the back, so it all looks like one piece. Continuity is a good thing. Be that as it may, there are a couple of ‘real’ glass phones in the market today, in this segment, that exude more premium than this.

The Honor 9X is a big phone, much like any other phone today, which means people with small hands may find it hard to reach every inch of it comfortably. I like that Honor has curved the sides to just the right proportion - believe me, things could have been far worse if this thing was flat. Also, the power button and volume rocker on the left are at acceptable height; so is the rear-mounted fingerprint reader. While the buttons on-board offer good tactile feedback, biometrics are fast are reliable. 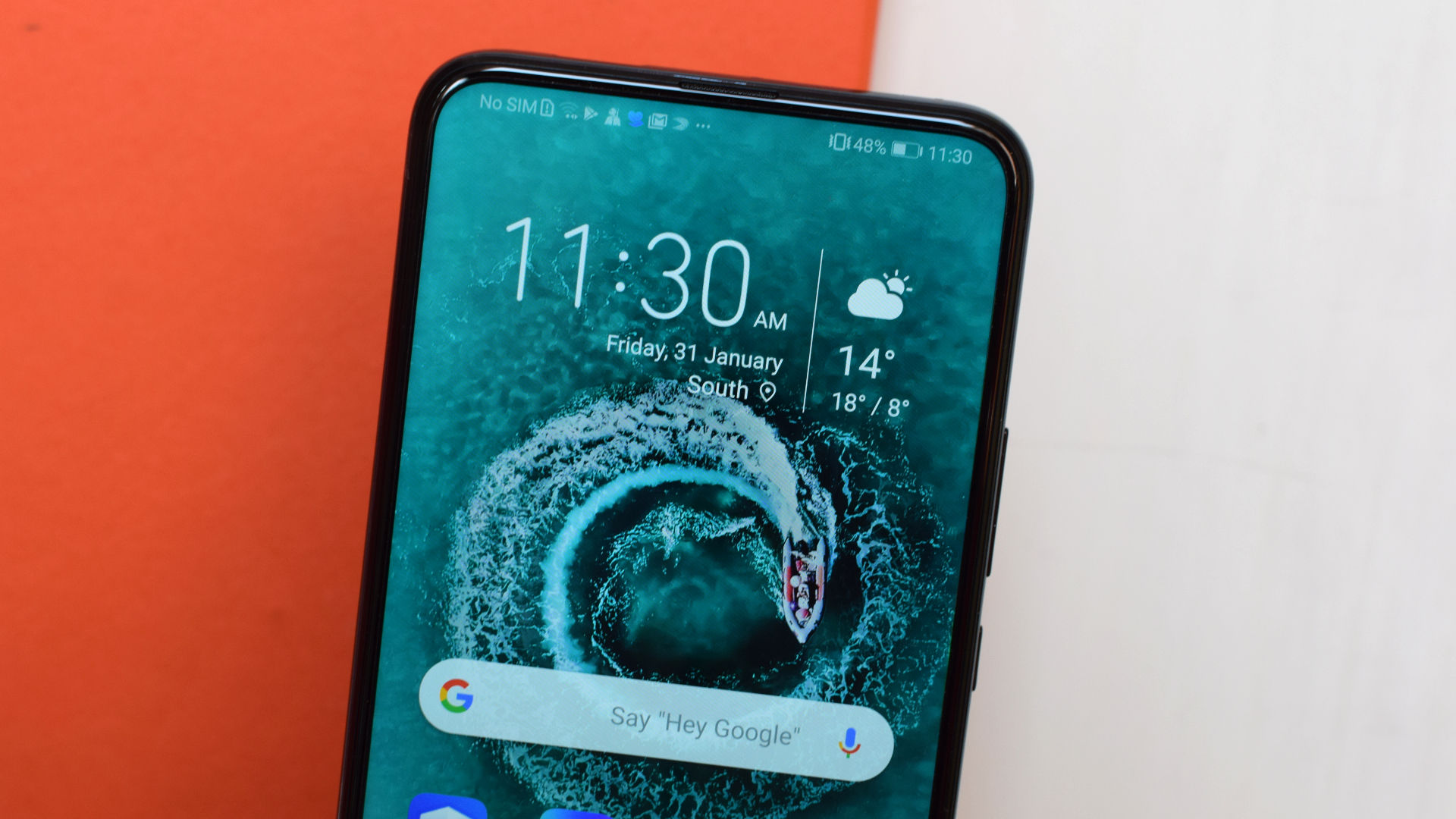 The Honor 9X has a pop-up selfie camera setup – it is, in fact, the cheapest phone in the market today with such a setup. The setup unsurprisingly entails in larger screen real estate over peers offering waterdrop or a punch-hole style notch at similar prices. Not to mention, the setup also allows for an uninterrupted near all-screen experience while watching content. Plus, the whole thing looks cool, so that’s another icing on the cake.

The 6.59-inch screen of the Honor 9X has a resolution of 2340x1080 pixels. The panel is IPS LCD – which is fine, considering the price point that we’re dealing with here. What’s important is, is it any good? It is. It’s plenty sharp and pleasing to the eyes without going overboard with saturation. Brightness levels are at par with competition, but there’s still room for improvement. I wish that it was a little brighter.

Honor does not say if it’s using any sort of coating to protect that screen, so the bundled TPU case does come handy. There is a pre-applied screen guard but it’s not the best quality. 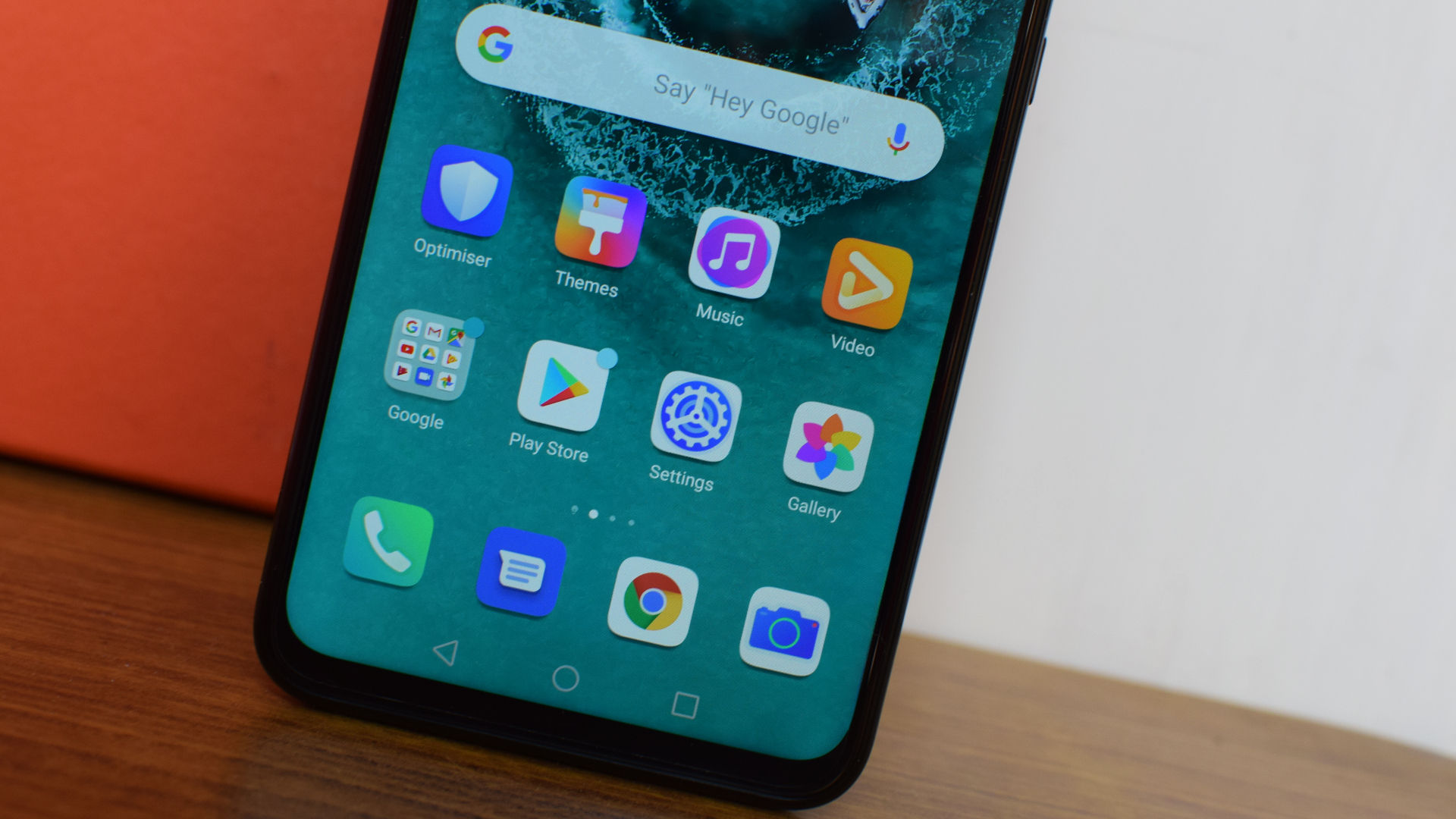 The Honor 9X is powered by Huawei’s inhouse Kirin 710F processor and while I have had no ‘major’ hiccups with it during my review period, you should know, it could have done better with ‘better’ hardware. Not so much in terms of sheer power, but for future proofing. The Kirin 710F is essentially a repackaged variant of the now 2-year-old Kirin 710 seen inside the Honor 8X (the Honor 9X predecessor) with the same technical specifications. This is paired with up to 6GB RAM and 128GB storage (expandable).

So, what does it mean? Let’s start with the good stuff. Because Honor is using custom silicon in the Honor 9X, almost everything feels well optimized. The phone breezes through your regular run-of-the-mill smartphone things with ease – and without breaking a sweat. The latter bit means, the phone is also very power efficient and does not get hot no matter how you push it – that's the 12nm Kirin 710F’s another big highlight.

But, the Honor 9X isn’t a phone meant for ‘serious’ gamers. The Mali G51 MP4 GPU inside it isn’t cut out for high-end gaming. This does not mean you can’t play PUBG or Call of Duty on it. You can but at medium/low graphics settings only and even then, be prepared for stutters every now and then. This probably wouldn’t have been a problem a year or two ago, but today, it is since there are more powerful phones with more powerful ‘modern’ GPUs at similar prices. The Xiaomi Redmi Note 8 Pro is one fine example.

Basic games are handled well by the Honor 9X though, so if high-end gaming isn’t your top priority, there’s no other reason why you wouldn't want to consider it. Except, there’s also the software bit. The Honor 9X runs Android 9 Pie-based EMUI 9.1 (not Magic UI for some reason) software and while Honor has reiterated its commitment to users saying “all Honor smartphones and tablets will continue to receive security patches and Android updates. Also, anyone who has already bought an Honor smartphone or is planning to buy, can continue to access the world of apps as they have always done,” there’s still no clarity on the future of the company with Google. Of course, the Honor 9X shouldn’t be impacted since it’s a global variant of a phone which was launched before Honor was banned from selling phones with the Google Play Store and other key Google services – but can’t say all this makes it difficult to recommend any Huawei or Honor product right now, howsoever fantastic it may be.

If that doesn’t bother you, I am happy to report that, EMUI 9.1 inside the Honor 9X works well much like how it does in any other recent Honor phone. It’s snappy and feature packed to the T. Android’s new gesture-based navigation works well, plus there’s also an option to use an app drawer interface that many people like. You can run two instances of the same app like WhatsApp as well. Speaking of which, the only quibble I have here is that the Honor 9X ships with way too many unwanted first-party and third-party apps – something that could have been avoided.

Once you’re past that, another area where Honor’s optimizations work like a charm, is battery life. The 4,000mAh battery inside the Honor 9X will easily last a full day even for the most demanding users. Sadly, the Honor 9X does not support fast charging. There’s just regular 10W charging through USB Type-C on this one. 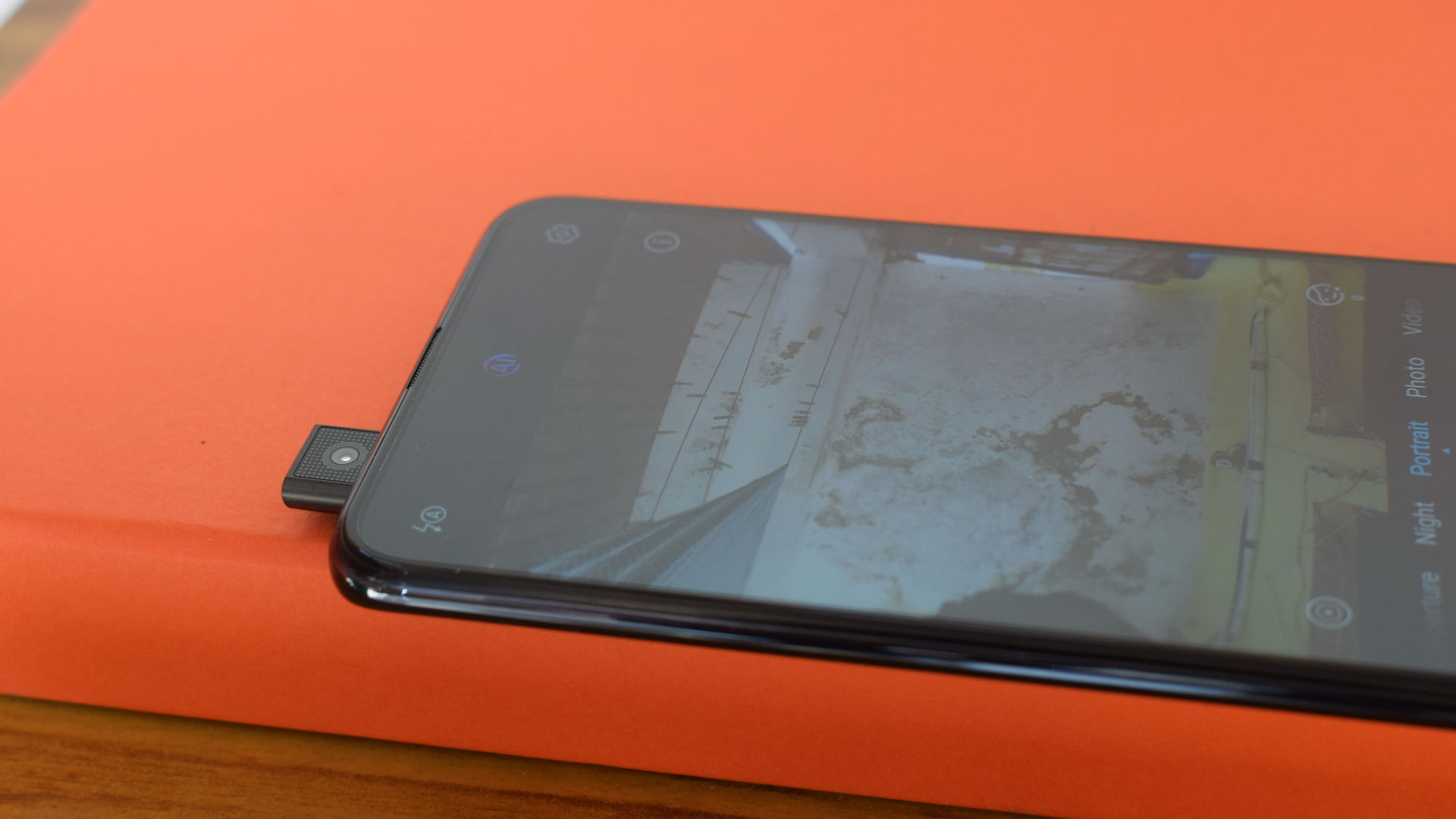 For a phone that costs as low as it does, the Honor 9X packs some impressive camera specifications. It has three cameras on the rear to begin with. There’s a 48MP main sensor (that’s Sony’s IMX582 for your reference) behind an f/1.8 lens, paired with an 8MP ultrawide-angle camera with a 120-degree field-of-view, and another 2MP camera for portrait photography. That main camera also supports Huawei/Honor’s ‘reputed’ night mode. On the front, the Honor 9X has a 16MP pop-up camera that can also do software-assisted bokeh selfies.

As for image quality, it is quite good. That’s especially true for the main camera. In good light, 12MP pixel-binned photos taken with the Honor 9X come out sharp with decent amount of detail and colors that are mostly true to source. Dynamic range also remains consistent across the board here. I like that the Honor 9X main camera takes photos with pleasing colors by default while those seeking some extra saturation can get that boost by turning on the phone’s AI mode. That main camera is also capable of shooting native 48MP photos but again, that’s not its main attraction – far from it. The Honor 9X falters – way too much, sometimes – in tricky and low light though. In low light, the phone’s night mode does help capture more light so resultant images are brighter with slightly more detail, but there’s also a fair amount of softness to them. All in all, that main camera gets the job done but there are certainly better options.

The 8MP ultrawide-angle camera is average at best and mind you, that’s in good light, although I do like Honor’s automatic fish-eye reduction algorithm so there’s a general evenness to these photos throughout the frame. The 2MP depth camera is meanwhile a hit or miss affair.

The Honor 9X’s 16MP front camera clicks some good-looking selfies in good light with good detail and natural colors. Portrait selfies come out nice too, but there is room for improvement. That pop-up mechanism could be faster though – that's possibly why the Honor 9X does not support face unlock.

Should you buy the Honor 9X? 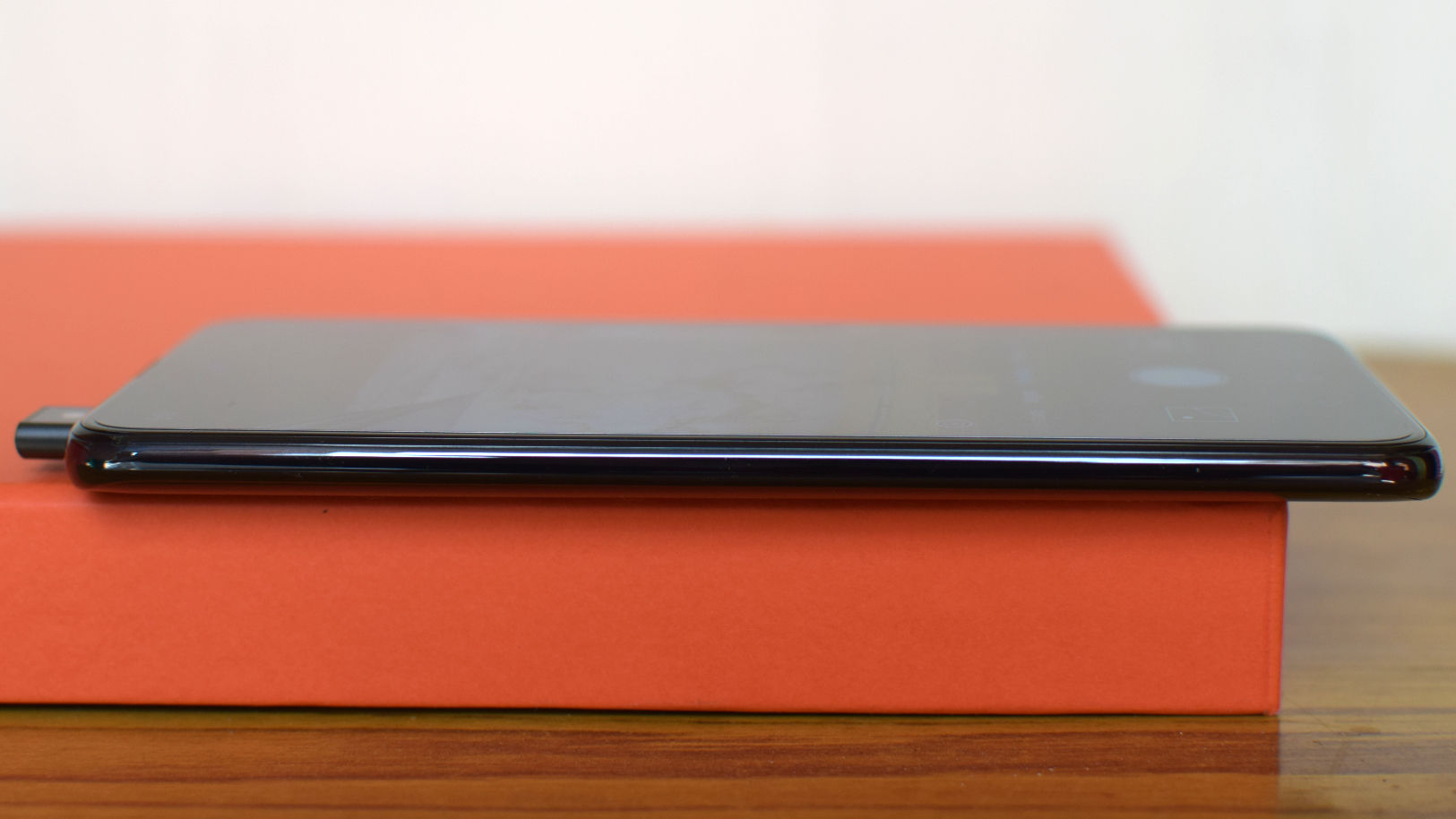 The Honor 9X is a well-rounded package that does most things right at the right price. But it’s also a little late to the party I believe – in India. Globally, the Honor 9X has been around for a while now and it’s coming at a time when rivals like Xiaomi and Realme are churning out ‘new’ handsets in rapid frequency. That doesn’t help its case, especially if one was to talk about core hardware. It’s not a bad phone but somehow it doesn’t feel ‘modern’ enough in a sea of more modern smartphones from competition.

That all-screen design and pop-up camera are of course its big highlight. It has dependable performance and good battery life to tag along. If that’s something you’re out for, the Honor 9X is worth a look. But if you want more, clearly, there are better options now.

Also Read:  Honor 20 Review: What Could Have Been, One Of The Best Smartphones Under Rs 35,000