Oppo spinoff brand Realme launched the Realme 3 Pro phone in India on Monday. The Realme 3 which is a follow-up to the successful Realme 2 Pro from last year brings an updated gradient design and a teardrop/waterdrop-style notch, in addition to packing newer hardware (a Qualcomm Snapdragon 710) and software (Android Pie-based ColorOS 6). On the face of it however, the Realme 3 Pro is all about speed, according to Realme.

The Realme 3 Pro boasts of a fresh gradient design language – Realme says the design is inspired by the Le Mans race track in France. It has a unique oblique gradient colorway and an S-shaped pattern on the back that’s visible at specific angles – this is reminiscent to the OnePlus 6 and ObnePlus 6T. Realme is offering three distinct styles here – Nitro Blue, Lightening Purple and Carbon Gray.

Underneath, it’s all plastic though which is understandable considering the price – but competing products from Xiaomi and Asus have moved on to glass and metal now, so that’s that. Overall, the Realme 3 Pro does manage to stand out from competition with its unique blend of colour and style options.

The Realme 3 Pro also packs many segment firsts including 20W VOOC 3.0 flash charge (with compatible adapter and cable in the box) and super slow-motion video recording at 960fps. 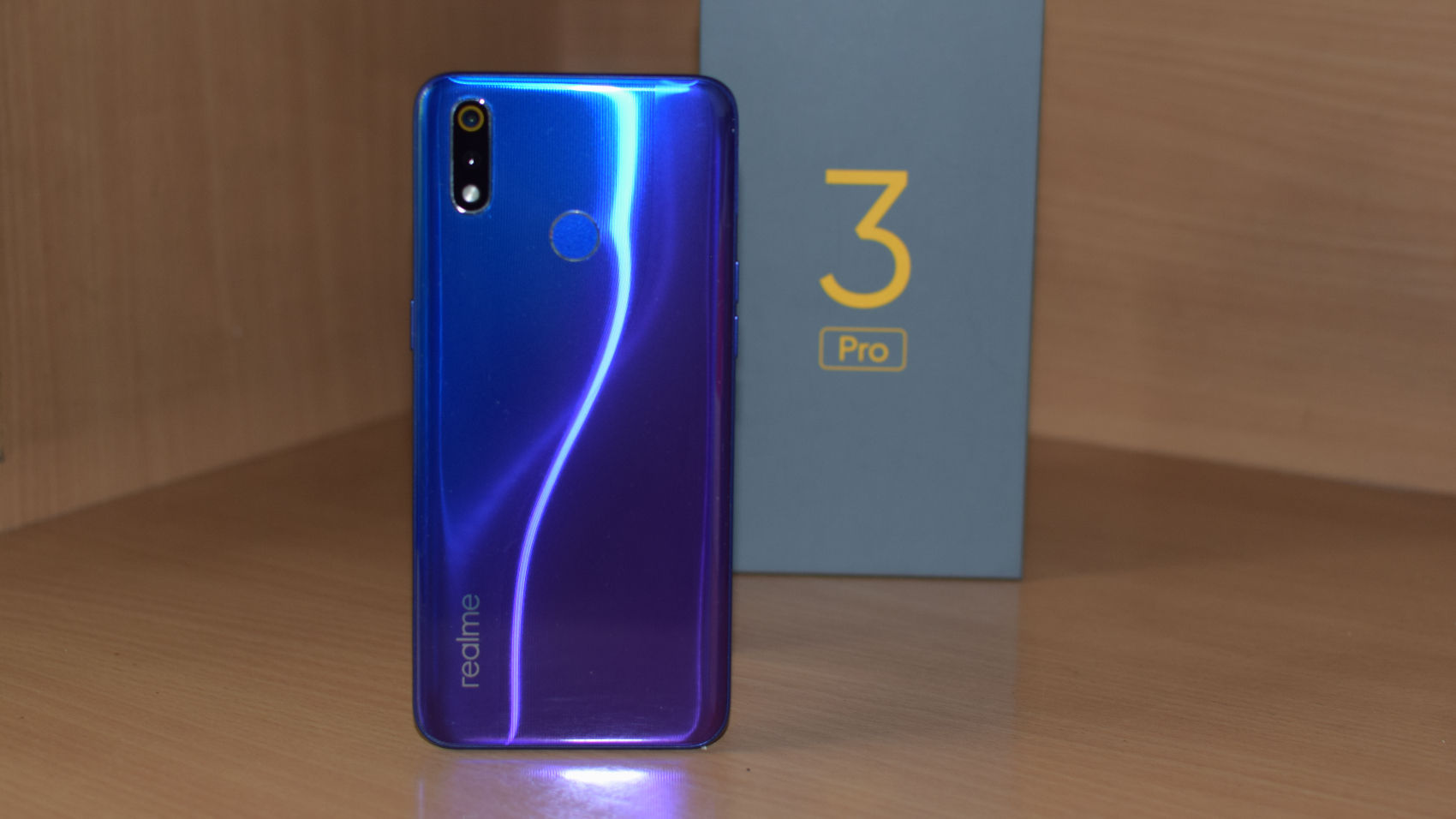 The Realme 3 Pro has a 6.3-inch 1080p+ IPS LCD display with a teardrop/waterdrop-style notch and Corning Gorilla Glass 5 protection. It is powered by a 2.2Ghz octa-core Qualcomm Snapdragon 710 processor paired with up to 6GB RAM and up to 128GB storage which is expandable by up to 256GB via a dedicated micro-SD card slot. The dual-SIM Realme 3 Pro runs Android 9 Pie-based ColorOS 6.

The Realme 3 Pro further packs a sizeable 4,045mAh battery with a segment first VOOC 3.0 flash charge which is claimed to top the battery from 0-100 per cent in just 80 minutes.

On to the optics, the Realme 3 Pro has a dual rear camera system on the rear consisting of a 16MP (Sony IMX 519) sensor with f/1.7 aperture and another 5MP sensor for depth sensing aka portrait photography. On the front, the Realme 3 Pro comes with a 25MP camera with f/2.0 aperture.

While the Realme 3 Pro’s dual rear camera system (and also its front camera) supports AI-based scene recognition, Realme is touting two features as highlights. One being Nightscape which is Realme’s take on the night mode we’ve come to see on many phones lately - for cleaner low-light photos with more detail. The other being Chroma Boost – for achieving greater dynamic range and more balanced exposure under different lighting scenarios.

Realme also says that the Realme 3’s front camera supports group selfie beauty (for up to 4 people) that can “automatically identify genders in the same photo to apply the most suitable beautification solutions.”

Realme will be also hosting a Realme pop up store sales event on April 27 at Pacific Mall, New Delhi where the company will let interested buyers try out the Realme 3 Pro in advance before making a purchase.