The Galaxy S10 Lite is a ticket into Samsung’s high-end flagship experience and definitely worth a look if you have a budget of around Rs 40,000.

Samsung launched the Galaxy S10 lineup of phones in India last year at a starting price of Rs 55,900 for the Galaxy S10e (6GB RAM/128GB storage) going all the way up to Rs 1,17,900 for the top-end Galaxy S10+ with 12GB RAM, 1TB storage and ceramic back. The lineup has since seen a price drop but then again, only ever so slightly which is understandable because we’re dealing with Samsung’s latest and greatest hardware here – at least, until the time the Galaxy S20 shows up.

Officially you can now get a Samsung Galaxy S10e at a base price of Rs 47,900. Pair that with a bank offer and you will be able to get it for around Rs 40,000. But the Galaxy S10e’ pocket size means it may not appeal to everybody, even though it’s a pocket rocket. Which means you don’t have a choice but spend more and get the vanilla Galaxy S10 if you want to get Samsung’s best. Some would do that. Some may not. In the past, Samsung wouldn’t have really cared about the latter group. In 2020, it seems it does. Enter the Galaxy S10 Lite.

The Galaxy S10 Lite, as the name suggests, is a ‘lite’ take on the ‘flagship’ Galaxy S10. The phone in question lies below the Galaxy S10e in the lineup and brings Samsung’s high-end hardware to the masses – at under Rs 40,000 to be precise. There’s a very simple reason why it exists. There’s a certain amount of familiarity associated with Samsung’s Galaxy S devices. These are Samsung’s no-nonsense high-end flagship devices. Samsung already has the Galaxy S10e (and vanilla Galaxy S10) as a more affordable option in the lineup and making things more accessible in the form of the Galaxy S10 Lite would hopefully help it sell more devices in markets like India where it’s comparatively easier to sell a ‘value’ flagship on the premise that these have everything that a true-blue flagship might have without the higher asking price.

And there are areas where the Galaxy S10 Lite offers even more bang for the buck over the Galaxy S10+. For starters, it is the first Samsung flagship phone in years to come with a Qualcomm processor – in this case, the Snapdragon 855. It has a massive 4,500mAh battery and supports whopping 45W fast charging. Samsung is also touting its cameras, especially a new hardware feature called ‘super steady OIS’ for seemingly more stabilized videos. It has a bigger 6.7-inch screen too.

In simple terms, you’ll be mistaken if you take the Samsung Galaxy S10 Lite lightly. Let’s review this thing now, shall we? 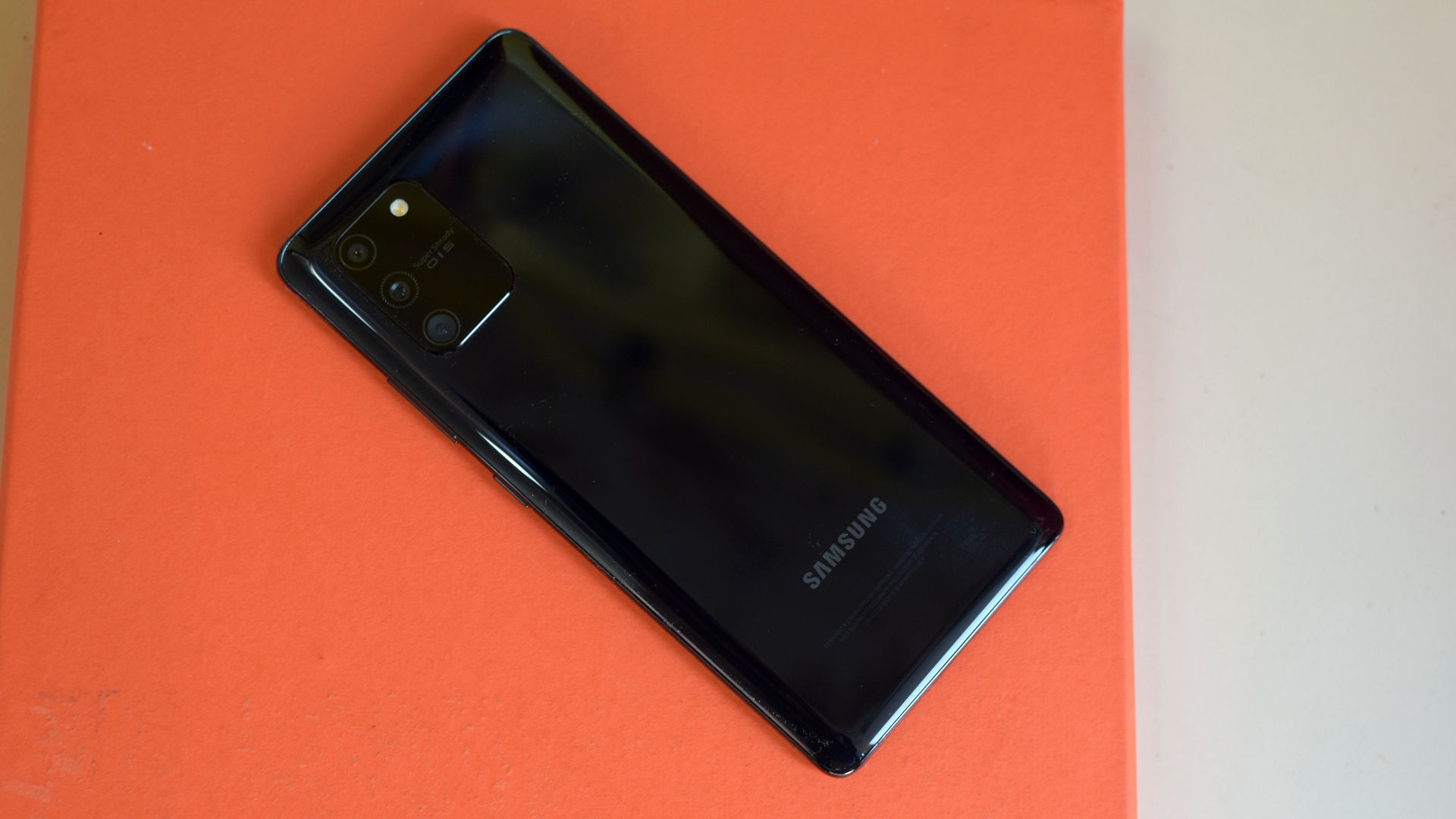 What really matters is the overall fit and finish – and the way this thing has been designed. It’s designed well. With rounded corners and curved edges, the Galaxy S10 Lite fits just right into your hands, while its flat screen ensures it doesn’t slip off from your hands. The Galaxy S10 Lite is a pleasure to hold and operate, so much so that it doesn’t take long to get used to its vast expanse. The back is rather plain and simple with a rectangular camera module positioned at one end at the top – it sticks out ever so slightly but not alarmingly so. This is a design inspired from Samsung’s new Galaxy A lineup, something that is also likely to make its way to this year’s Galaxy S20.

But this is an affordable flagship so to say which means that some corners have been cut. The Galaxy S10 Lite is made of ‘glossy’ plastic through and through. Samsung calls the material '3D Glasstic.’ While it does help in building a slim profile, it also leaves the phone prone to smudge and scratches in equal measure. Samsung is shipping a clear case in the box which comes handy. 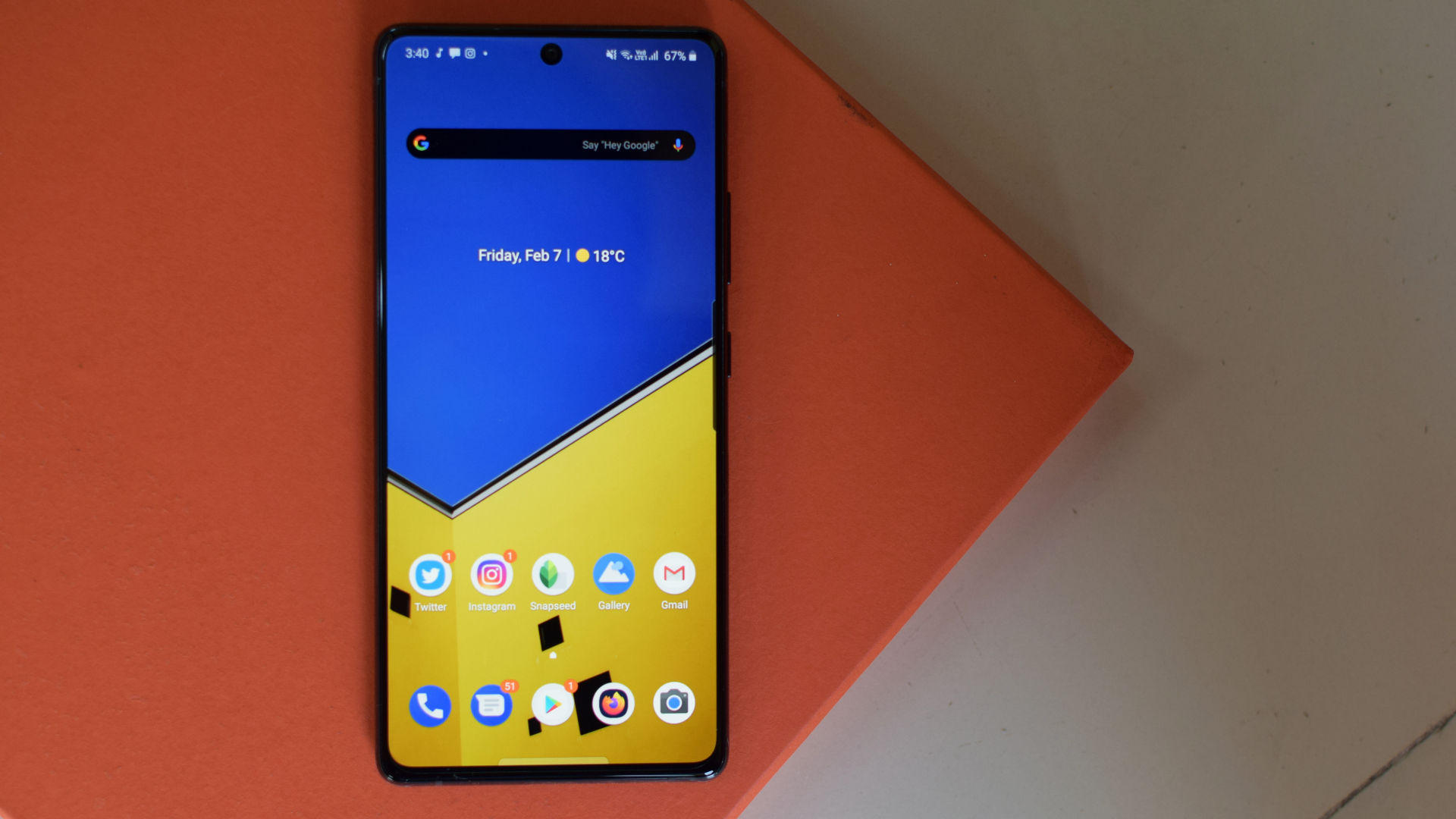 The front of the Galaxy S10 Lite is unlike any other Galaxy S10 phone. Rather, it is Galaxy Note 10 like. You don’t get Samsung’s highest end Dynamic AMOLED here but something that the company is calling Super AMOLED Plus. We don’t know what that really means though. But fancy naming conventions aside, Samsung makes the best display panels for smartphones and the Galaxy S10 Lite also has one of the best screens that money can buy at its price.

Whether you talk about brightness or contrast or outdoor legibility, you can’t go wrong with this one. Colors are more natural by default, but there is also an option to pump out Samsung’s signature over-contrast through the settings. Viewing angles are also abundantly good with minimal color and white shifting. The resolution is FHD+ and while there’s no OnePlus 7T-like 90Hz refresh rate here, the quality of the display is so good, chances are you won’t even notice it.

This is because the Galaxy S10 Lite is literally all-screen and no bezel with an Infinity-O punch hole in a dead center position where you’re most likely going to forget about it, after a couple of days or two. Even faster if you’re going to binge watch content on it. The Galaxy S10 Lite display is also certified for viewing HDR10+ content.

Unlike the Galaxy S10 and Galaxy Note 10 phones, the Galaxy S10 Lite gets an optical in-display fingerprint scanner which is faster in comparison, but again, a hit and miss affair. It’s not as fast competition, primarily the OnePlus 7T either.

Exynos-based processors have become the de facto when it comes to Samsung premium flagships in India. So, every instance when the company decides to flip the script in favor of a Qualcomm processor, you’re bound to notice. Since it doesn’t happen very often, one can also cherish this development. And for good reason. Both synthetic benchmarks and real-world experience give Qualcomm the edge when it comes to desirability. The Galaxy S10 Lite packs Qualcomm’s Snapdragon 855 and while it isn’t next generation so to say, it’s still got a lot of fire power under the hood to make you excited. That's basically the same deal as the Galaxy S10 lineup sold in the US.

This is paired with 8GB RAM and 128GB UFS 2.1 storage which is further expandable by up to 1TB via a hybrid micro-SD card slot. The dual-SIM phone runs Android 10-based One UI 2 software – that's the best from Samsung right now. 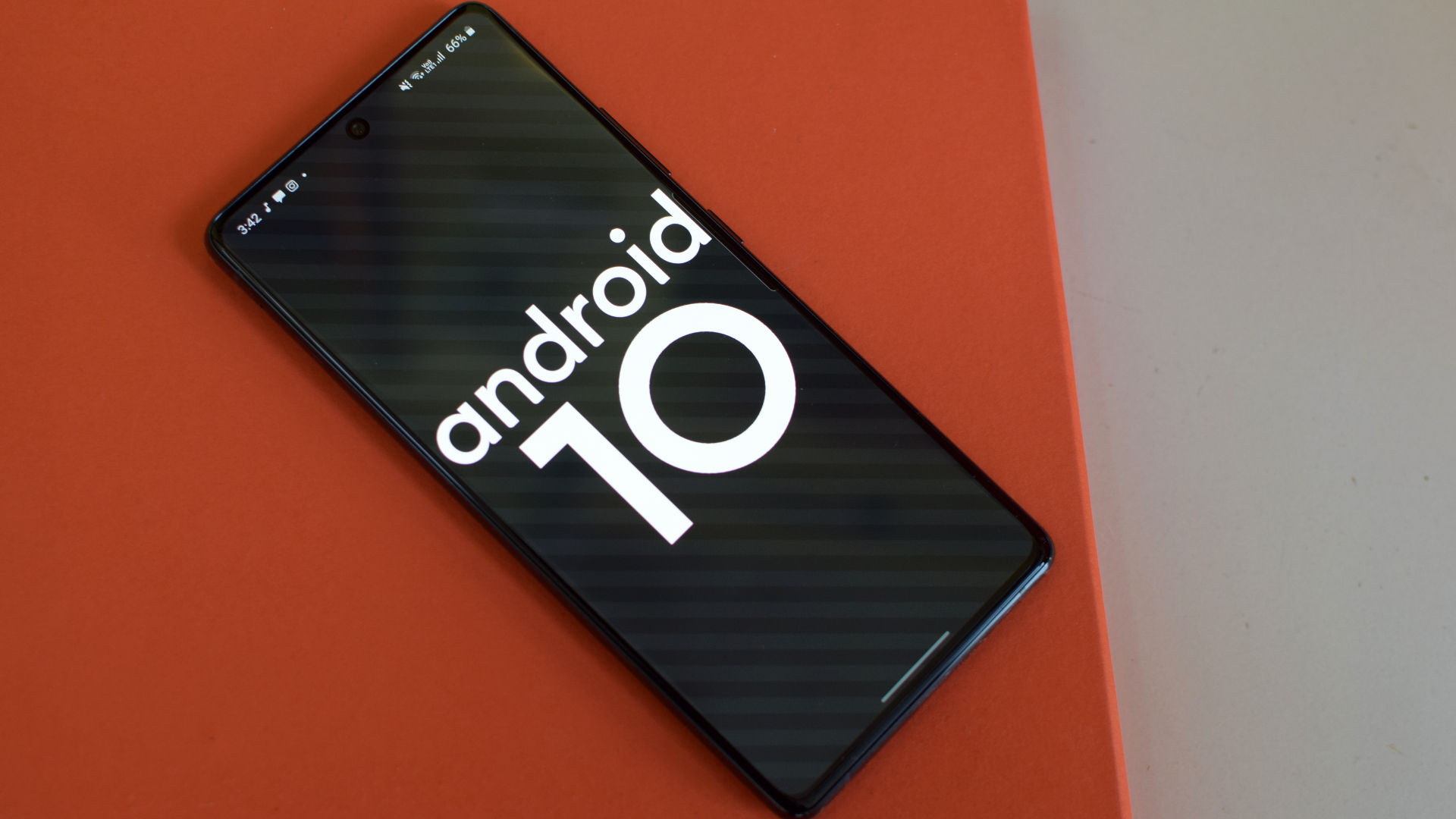 Unsurprisingly, the Galaxy S10 Lite literally flies – no matter what you throw at it. And it does that without breaking a sweat. Samsung does not say if it’s using any sort of fancy cooling technology inside, but the thing has been running mostly cool mostly all the time for me. That’s in part due to the fabulous Snapdragon 855 chipset and in part due to Samsung’s well thought out optimizations. The Galaxy S10 Lite handles everyday tasks like a boss and plays graphically demanding games like PUBG at high settings well.

The phone is efficient too and it boasts of the biggest battery that Samsung has ever shipped in a high-end flagship to date - which is 4,500mAh. Battery life is outstanding. The Galaxy S10 Lite is easily a one-and-a-half-day phone for even the most demanding users. 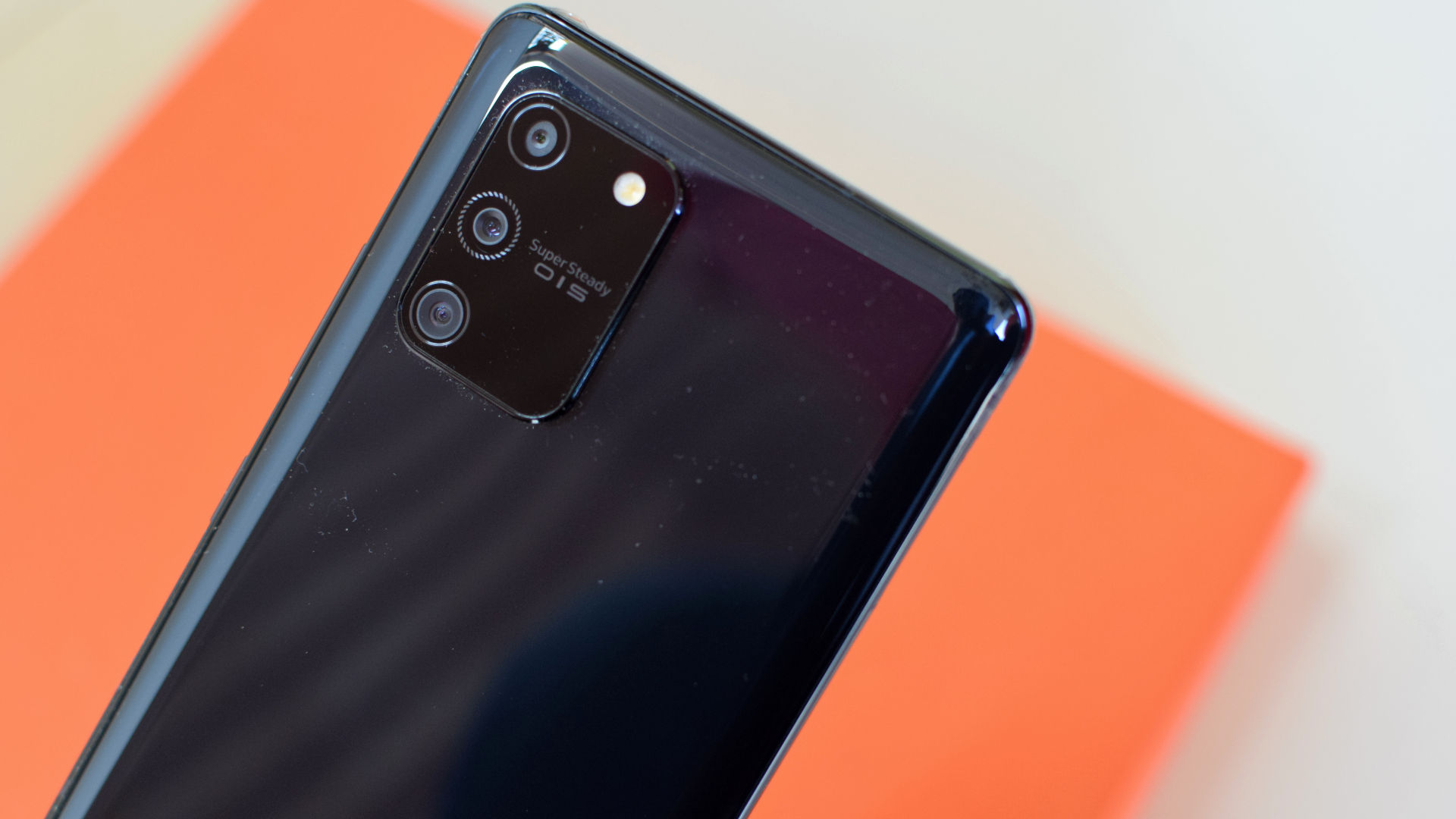 The Galaxy S10 Lite has three rear cameras. There’s a 48MP main sensor (that’s Sony’s IMX586 for your reference) behind an f/2.0 lens, paired with a 12MP ultrawide-angle camera with a 123-degree field-of-view, and another 5MP camera for closeups or macros. Samsung has been using 48MP cameras on some of its lower-end Galaxy A phones but clearly, not all 48MP cameras are created equally. The Galaxy S10 Lite is a fine example. It’s better. Samsung has also outfitted the Galaxy S10 Lite with something called ‘super steady OIS,’ that uses a combination of hardware and software to minimize shake and entail in seemingly better photos/videos in tricky scenarios. You should not confuse this with Samsung’s existing super steady mode which is essentially a software-only feature meant ‘specifically’ for video stabilization. While super steady mode needs to be enabled manually, super steady OIS is always on by default.

As for image quality, it is quite good. That’s especially true for the main camera. In good light, 12MP pixel-binned photos taken with the Galaxy S10 Lite come out sharp with good detail and colors that are mostly true to source, if a little oversaturated. Dynamic range also remains consistent across the board here. That main camera is also capable of shooting native 48MP photos but again, that’s not its main attraction – far from it. The 48MP main camera also handles tricky and low light well enough even with night mode off. Samsung’s HDR helps capture more detail in such cases while super steady OIS helps in focusing. There is some room for improvement though. Night mode works well enough helping capture brighter photos but there is some softness to them. All in all, that main camera gets the job done and is in fact a step up from what you get on the OnePlus 7T.

The 12MP ultrawide-angle camera is good enough especially in good light. Samsung’s automatic fish-eye reduction algorithm works well so there’s a general evenness to these photos throughout the frame. Low light photos could be better though. The 5MP macros shot using the Galaxy S10 Lite come out well detailed with mostly accurate colors but only when there’s a lot of light at your disposal.

While still photography may be a hit and miss on occasions, videos shot using the Galaxy S10 Lite (up to 4K UHD) are easily among the best in the under Rs 40,000 price segment. The level of stabilization and details here is simply hard to ignore.

On the front, the Galaxy S10 Lite has a 32MP camera that again uses pixel-binned photos with 8MP output. Selfies taken with it come out well detailed with pleasing colors in good lighting with the intensity of noise increasing as the level of light goes down. The selfie camera can also take software-assisted bokeh shots that are good enough, but we’ve surely seen better.

Quick pointers on the Galaxy S10 Lite as an everyday phone -

-- Phone calls made with the Galaxy S10 Lite are of good quality across the board – there’s nothing really to complain here. The dual SIM phone supports dual 4G VoLTE.

-- The Galaxy S10 Lite has a mono speaker out which gets loud but can’t match stereo output coming from phones like the OnePlus 7T.

-- The Galaxy S10 Lite does not have a headphone jack.

-- The phone does not support wireless charging or have any water and dust resistance like its more expensive Galaxy S10 siblings. Should you buy the Samsung Galaxy S10 Lite?

With the Galaxy S20 launch on the horizon (Samsung Unpacked is on February 11) it’s easy to write off the Galaxy S10 Lite, but with what’s in store here, it’s easily one of the most sought-after devices in Samsung’s 2020 portfolio that should hold its ground even after the arrival of the Galaxy S20 phones. The Samsung Galaxy S10 Lite is all about recycled parts but at least those are some good parts (especially the cameras). It’s not a downright OnePlus 7T killer (the OnePlus 7T has a more premium design and generally faster performance with a 90Hz display) but I really liking the 'new' trajectory the Samsung is taking here.

The Galaxy S10 Lite has a lot going for itself. It’s a ticket into Samsung’s high-end flagship experience at a relatively more mainstream pricing and definitely worth a look if you have a budget of around Rs 40,000.