China's Tianwen-1 spacecraft captured some really detailed and amazing pictures of the red planet while in orbit. Check out the Mars photos here.


In a recent flight, China's Tianwen 1 space ship has captured some really stunning images of Mars, against a totally dark background. The photographs were taken over the northern and the southern hemisphere of mars with the medium resolution camera on the Tainwen space ship. The CNSA has released a total of two Mars photos from the Tianwen 1. Scroll down to see the beautifully captured photographs.

Tianwen-1 Mars Photographs were taken separately, as the space ship orbited the red planet, over the northern and the southern hemisphere. The photos were captured by the Tainwen space ship's medium-resolution camera. The Tianwen 1 is China' first-ever interplanetary mission in the history of the country's space travel. The beautifully captured photos show the eastern hemisphere of Mars. The image shows a lot of detail, including surface features of the red planet and the fight outline of the Martian atmosphere. The photos were taken from approximately a distance of 6850 miles or 11,000 kilometres. 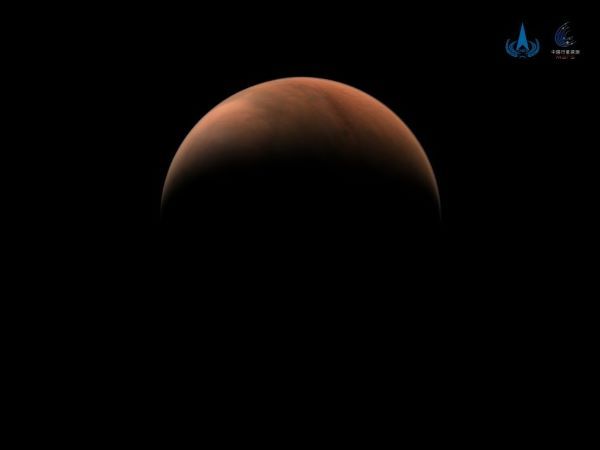 The Tianwen-1 probe space ship is currently in a polar orbit around the planet of Mars. At its' closest point, the space ship reaches as close as 174 miles or 280 kilometres to Mars. At the extent of its orbit, the spaceship moves away around 36,660 miles or about 59,000 kilometres from Mars. This orbit allows the space ship to collect high-quality photos of potential landing sites on Mars. The space ship's high-resolution camera has been collecting detailed images of the target landing site in preparation for the landing attempt in May or June of 2021, according to Space.com. The Tianwen 1 arrived in orbit of Mars on February 10, a week ahead of NASA's Perseverance landed on Mars.