Vodafone Idea Chairman Kumar Mangalam Birla on Friday said that the telecom operator will have to shut shop if the government does not provide any relief.

Vodafone Idea Chairman Kumar Mangalam Birla on Friday said that the telecom operator will have to shut shop if the government does not provide any relief. After Birla's statement, Vodafone Idea's shares fell more than 5 per cent on Friday.

"If we are not getting anything then I think it is the end of story for Vodafone Idea," Birla said when asked about the future of Vodafone Idea in absence of a government relief on a payment of Rs 53,038 crore dues.

On the National Stock Exchange (NSE), the scrip fell 5.48 per cent to Rs 6.90 a unit. During the day, the scrip lost as much as 8.9 per cent to Rs 6.65. Over 51 crore shares of Vodafone Idea were traded on the NSE and more than five crores on the BSE.

Meanwhile, the BSE has sought a clarification from the telecom operator on this statement. Shares of Vodafone Idea have been on a bumpy ride for five trading sessions. The stock has lost over 11 per cent on the BSE as well as the NSE since Monday. 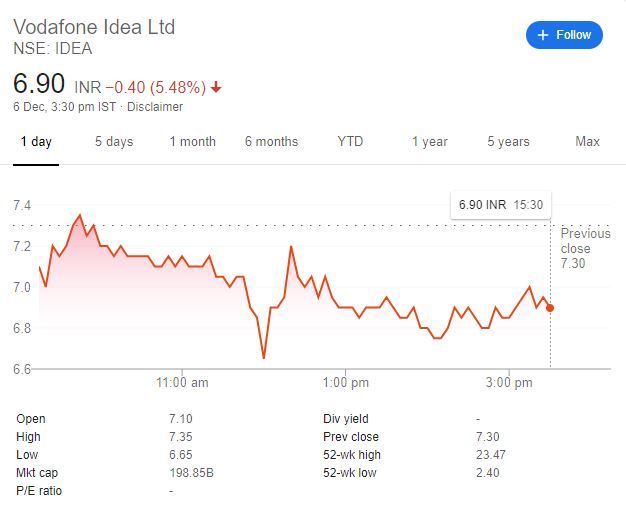 Last month, Vodafone CEO Nick Read had raised similar concerns hinting that the mounting debt on Vodafone Idea could result in the company's untimely exit from the India market. Read had said that the government needs to ease off on payment demands to ensure a future for Vodafone-Idea Ltd.

The Supreme Court of India upheld the government's position on including revenue from non-telecommunication businesses in calculating the annual Adjusted Gross Revenue (AGR) of telecom companies, a share of which has to be paid as license and spectrum fee to the exchequer.

Vodafone Idea had said its ability to continue is dependent on obtaining relief from the government and positive outcome of the proposed legal remedy. Vodafone Idea estimated liability of Rs 44,150 crore post the apex court order and made a provision of Rs 25,680 crore in Q2 2019.

Days after posting a quarterly loss of Rs 50,921 crore amid concerns on its survival, Vodafone-India recently hiked its tariff rates by up to 50%.