The Redmi Note 8 punches way above its weight in more ways than a budget conscious buyer could ever imagine. We review.

That’s not to say that Xiaomi has cut any corners here. The Redmi Note 8 still punches way above its weight in more ways than a budget conscious buyer could ever imagine. But it doesn’t wow you the way the Redmi Note 7 or the Redmi Note 7S did earlier in the year. There’s also the fact that it lives under the shadow of the very impressive Redmi Note 8 Pro. And, then there’s competition.

The Redmi Note 8 looks and feels a lot like the Redmi Note 7. That’s both a good thing and bad. Good that it’s still one of the prettiest phones that you can buy at its price point and you can still be rest assured about the phone’s all-round build quality, and bad that, the design may seem a little dated by Xiaomi standards. Xiaomi managed to bump things up quite a bit with the Redmi Note 8 Pro – that one’s a complete overhaul of the Redmi Note 7 Pro. So, it’s a little disappointing that the Redmi Note 8 didn’t get a similar treatment. 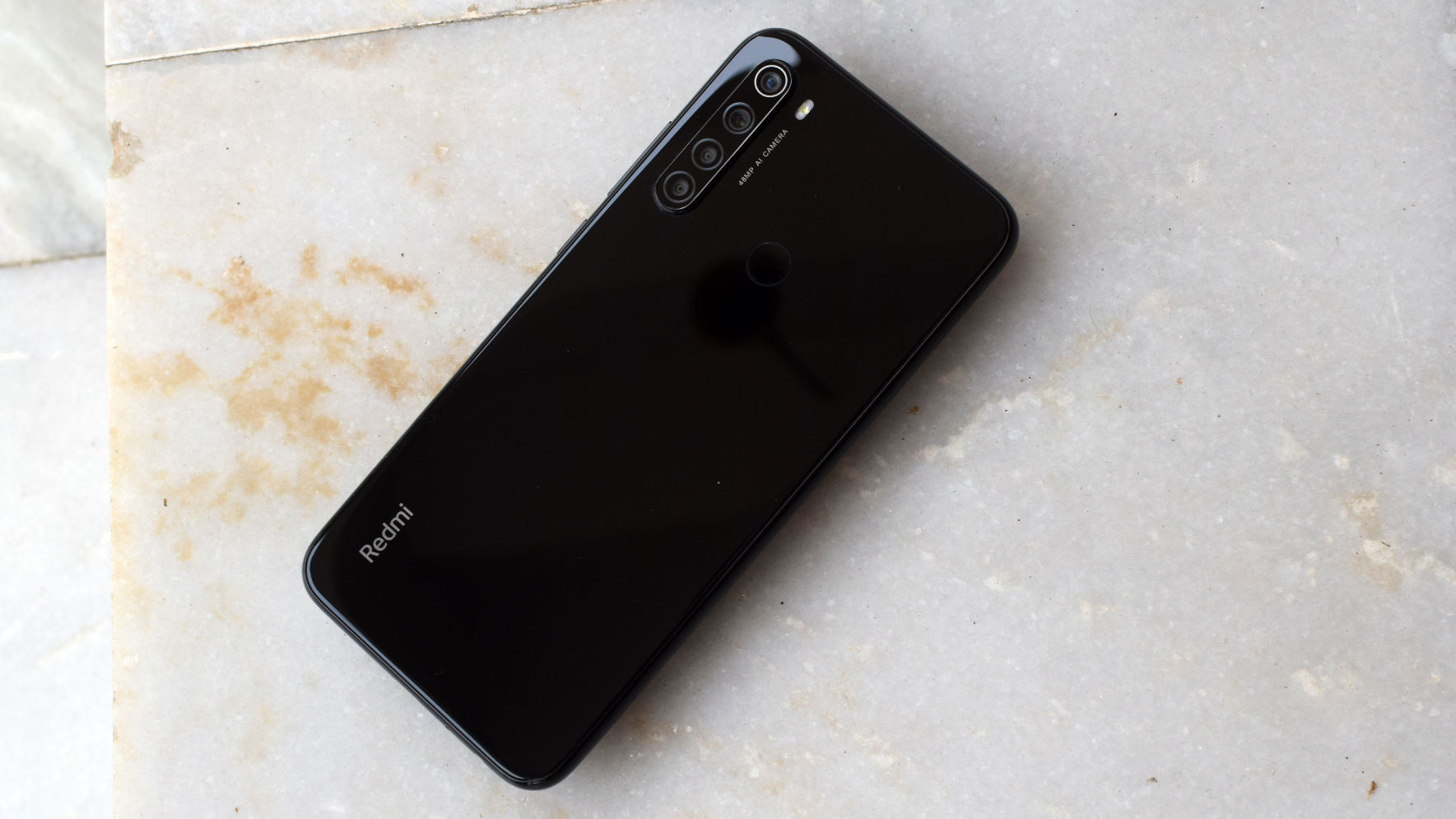 That’s not to say that the Redmi Note 8 is an exact replica of the Redmi Note 7 though. There are a few changes. Subtle, but they’re certainly there. Like the Redmi Note 7, the Redmi Note 8 also boasts of Xiaomi’s aura design, which is a combination of glass and plastic, but there’s a slight twist in the gradient scheme and three new colourways, Neptune Blue, Moonlight White and Cosmic Purple – plus the standard Space Black. Each of these (except the black variant) tends to bend light differently, unlike the Redmi Note 7 which was largely solid. The Redmi logo on the back also sees a revision in positioning.

There’s one thing that the Redmi Note 8 borrows from the Redmi Note 8 Pro though – and I am not particularly fond of it. The Redmi Note 8 also has a huge camera bump which means that the phone wobbles quite a bit when placed back facing down unless you cover it up with the bundled case.

A few things to note about the Redmi Note 8’s design and build:

-- The Redmi Note 8 has Corning Gorilla Glass 5 on the front and on the back. The outer frame is all-plastic, so are the power button and volume rocker - these offer excellent tactile feedback.

-- The Redmi Note 8 has a rear mounted fingerprint scanner which is ridiculously fast and accurate.

-- The phone has a P2i hydrophobic coating which makes it resistant to light splashes of water/rain.

On the front, the Redmi Note 8 has a 6.3-inch IPS LCD display with a 1080p+ or full-HD+ resolution and a waterdrop-style notch - Xiaomi calls it, a dot notch – which is again same as the Redmi Note 7. Much like the Redmi Note 7, colours look a little muted (especially by default) on the Redmi Note 8 but brightness levels and viewing angles are quite good. The Redmi Note 8 display isn’t HDR-certified like the Redmi Note 8 Pro’s but you do get Widevine L1 support out-of-the-box which means you can stream HD content on it from OTT services like Netflix and Amazon Prime Video.

But the Redmi Note 8 is surely not the best-in-class. Rivals have caught on. I can think of at least two competing phones with the same hardware, the Realme 5 and Vivo U10, that offer faster performance. Of course, this also has to do with the fact that both these phones have a 720p+ resolution which means there are fewer pixels to drive. So, one can argue that the Redmi Note 8 offers the best of both worlds – a sharper display and generally good performance.

The same is true about the phone’s battery life. The 4,000mAh battery inside the Redmi Note 8 can easily last a full day with moderate usage – even one and a half days should you tone things down further. In our battery loop test, the phone lasted for 15 hours 42 minutes which is in fact better than the Redmi Note 8 Pro (which has a larger 4,500mAh battery). But again, the Realme 5 and Vivo U10, not only offer a significantly bigger 5,000mAh battery, their lower resolution screen means they last way longer in comparison.

A good thing about the Redmi Note 8 is that the phone supports 18W fast charging through USB Type-C and Xiaomi is bundling a compliant charger in the box. No other phone does that in its price segment. 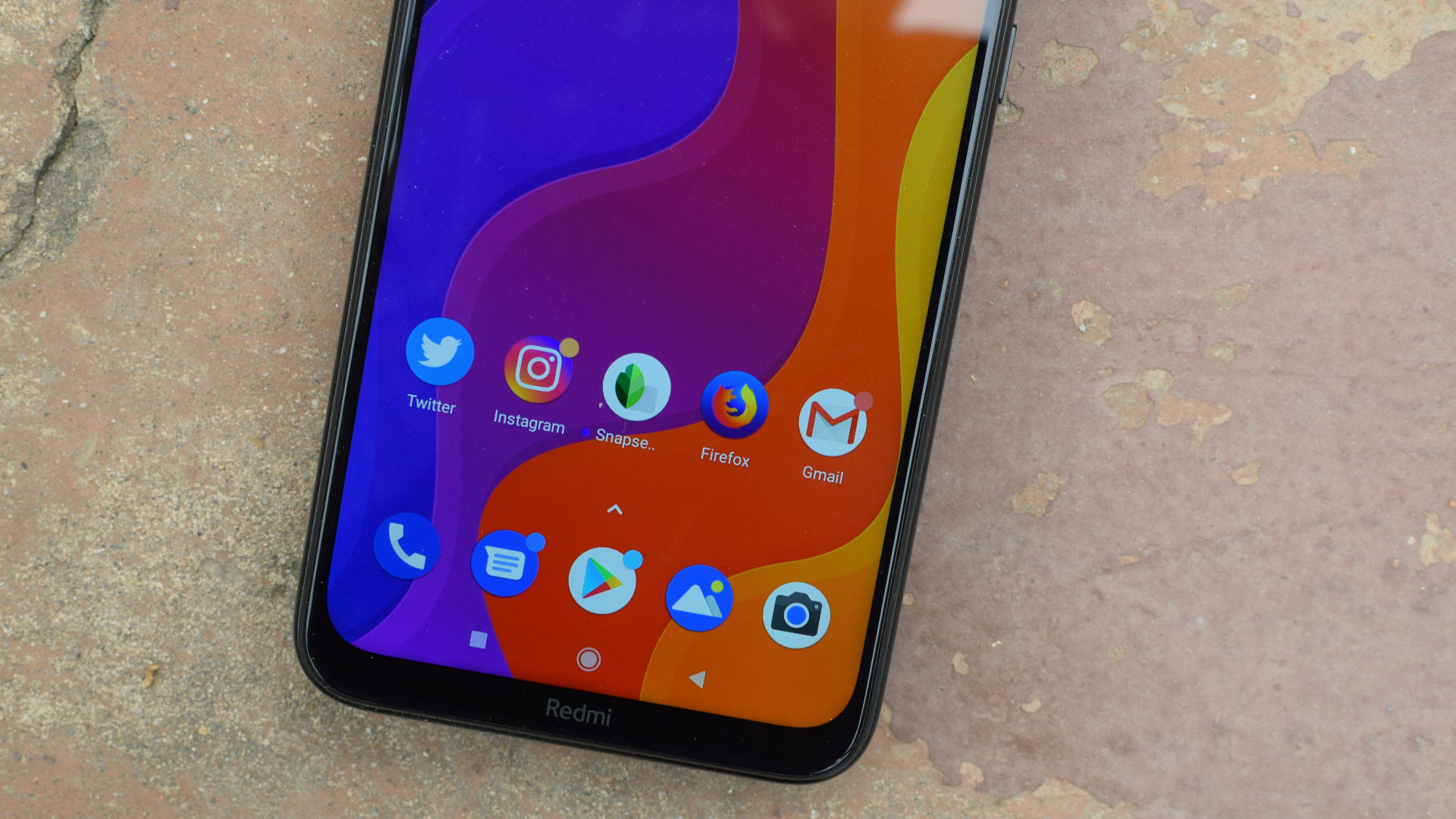 Quick pointers on Redmi Note 8 as an everyday phone:

-- Software inside the phone is Android 9 Pie-based MIUI 10. Yes, there are ads. Xiaomi says the phone will be updated to MIUI 11 by the end of November.

-- The Redmi Note 8 has a mono speaker out that’s average at best. There’s a 3.5mm audio jack for wired audio – which is decent. The phone comes with a one-of-its-kind clear speaker feature that plays a 30 second audio, when enabled from the settings, to well, clear the speaker vent off any dust particles. I think that’s a nice touch.

-- Phone calls made with the Redmi Note 8 are of acceptable quality across the board – nothing really to complain here. The dual SIM phone supports dual 4G VoLTE.

-- There is an IR blaster on the phone as well as wireless FM radio.

The Redmi Note 8 has four cameras on the rear. That's two more than the Redmi Note 7 and Redmi Note 7S. There’s a 48MP main camera, an 8MP ultra-wide camera, a 2MP depth camera, and a 2MP macro lens. That main camera uses Samsung’s 48MP GM1 sensor which can produce sharper, more detailed 12MP photos in low light (and by default) and high resolution 64MP photos using software interpolation as and when required. 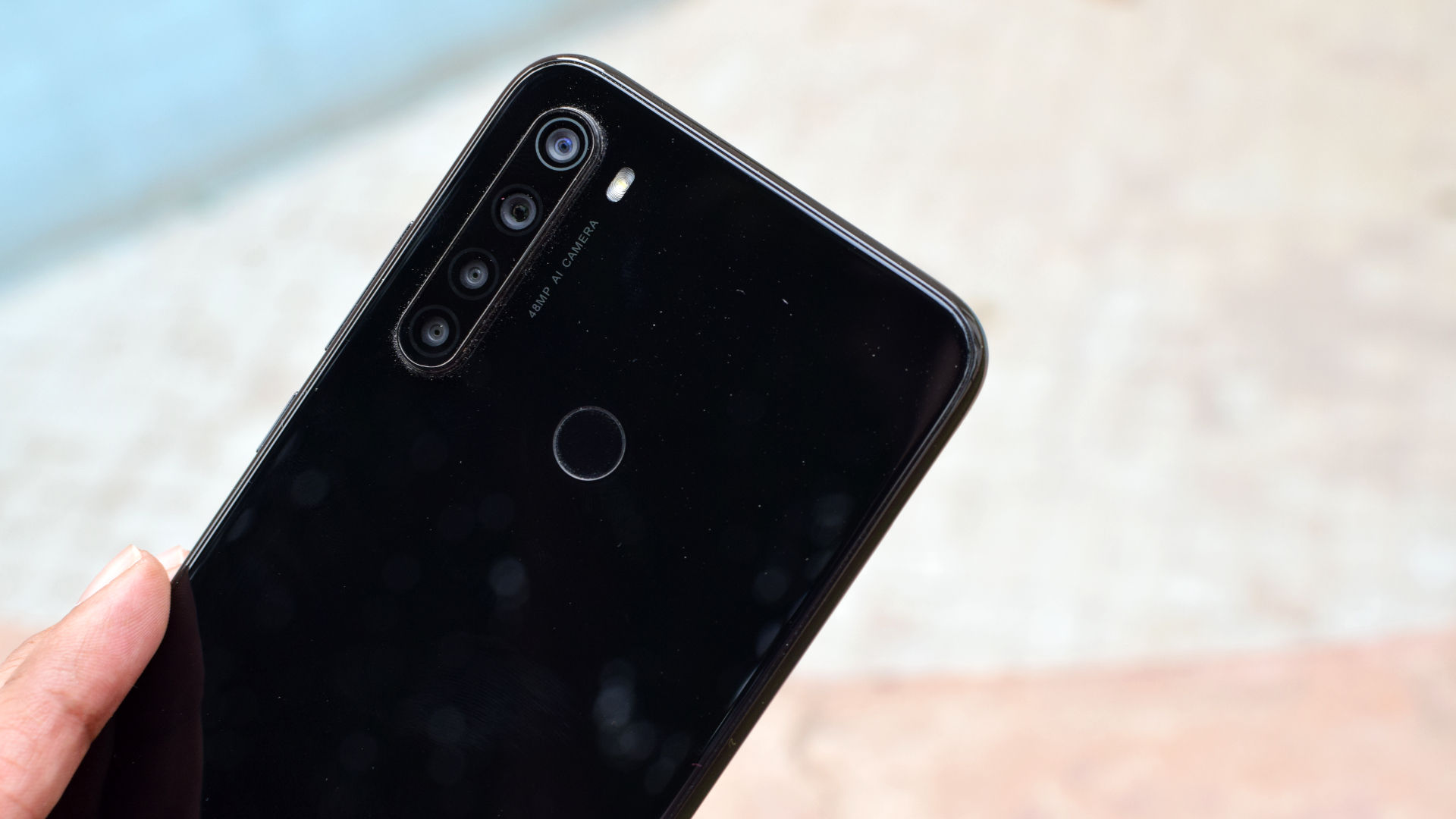 As for image quality, it is quite good. In good light, the phone’s 48MP rear camera can capture good-looking photos with good detail and colors that are mostly true to source – especially for close subjects. Dynamic range is quite good too for the most part. I like that Xiaomi isn’t overdoing things with fancy post-processing algorithms resulting in truer to life photos when the lighting is ideal. Sticking to the default 12MP mode is key as the 48MP photos serve no significant real-world purpose – these come out soft and grainy most of the time.

The Redmi Note 8’s main camera is also a capable performer in tricky and low light shooting brighter, cleaner and more detailed photos with little or no noise. There’s also a dedicated night mode to bump up the shadows and pick even more detail, but it’s a hit or miss really.

But the biggest highlight here is that the Redmi Note 8’s main camera feels faster. Yes, there are times when it slows down especially while locking focus on close-up subjects but overall, it’s an improvement over the Redmi Note 7S. The same is true about shooting at 48MP. Post-processing is faster too.

As for the other three cameras, well, results are very similar to what you get in the Redmi Note 8 Pro which is both a good thing and bad. Good that the Redmi Note 8 offers so much versatility, and bad that the all-round camera quality is average at best – nothing really to write home about. The wide-angle camera offers a wider perspective, but its quality leaves a lot to be desired, and the macro lens is a mere novelty. The only saving grace here is the depth camera that’s capable of shooting some good bokeh in all kinds of lighting situations.

I really like the Redmi Note 8’s video-recording capabilities though. This one can do decent 4K at 30fps (its predecessor didn’t support it) and it also lets you shoot videos from all its cameras including the macro, offering the level of versatility that no other smartphone does in this price range.

The front-facing camera does a good job too especially when the lighting is adequate – although details could have been better.

Should you buy the Xiaomi Redmi Note 8? 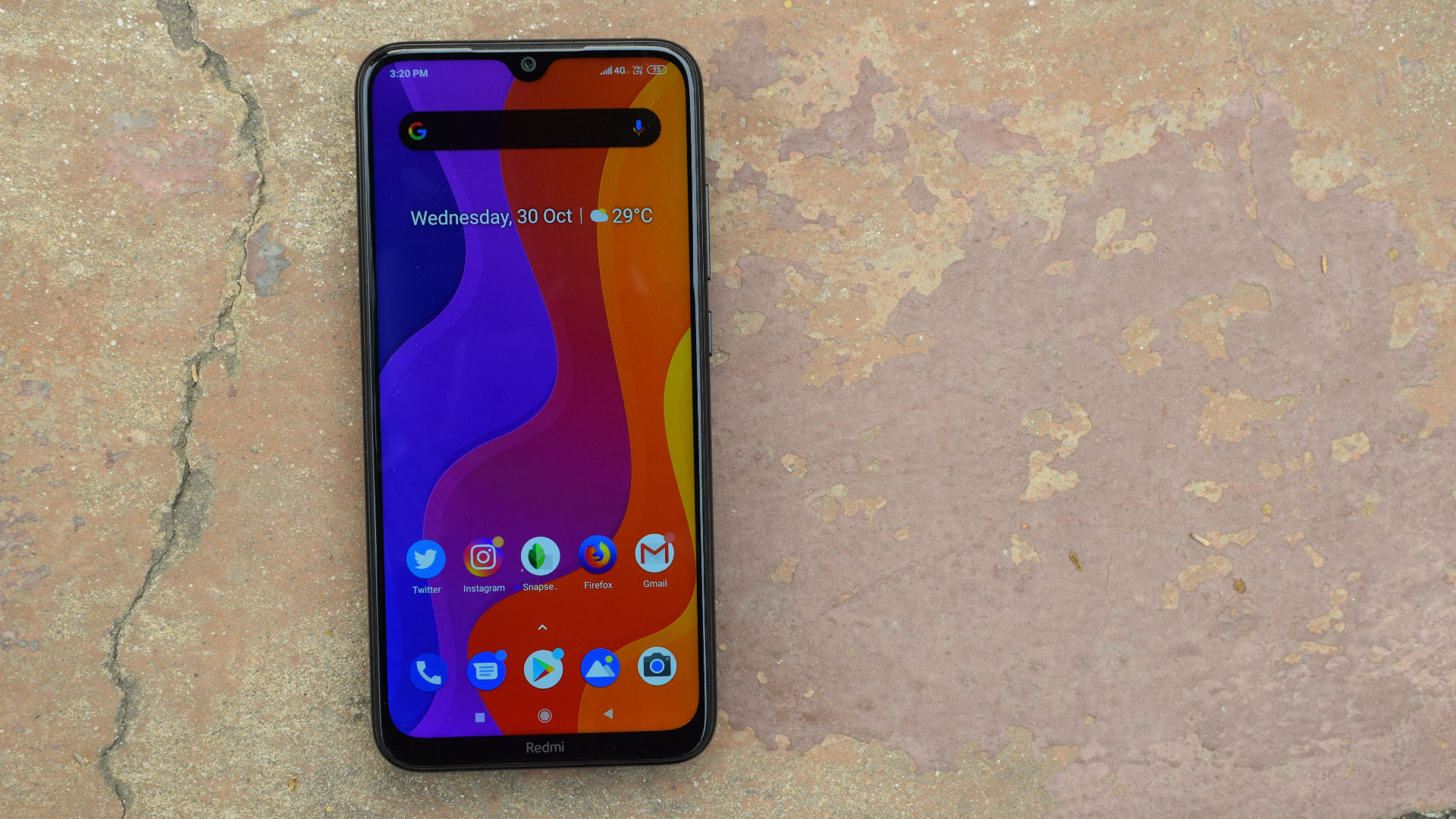 The Redmi Note 8 isn’t about reinventing the wheel. Rather, it’s all about building on the Redmi Note 7’s winning formula and improving things further.

Not every piece of tech needs to wow you. Sometimes, it’s the smaller things that make all the difference. Like bumping up the base configuration to 4GB RAM and 64GB storage, like adding a self-cleaning speaker, like adding a couple of more cameras and 4K video recording, like bundling a fast charger in the box – and yet, somehow managing to keep the price as low as possible, to stay true to the Redmi Note legacy. The Redmi Note 8 does all that and succeeds while at it. The Redmi Note 8 is a must buy for anyone looking for a wholesome package under Rs 10,000.