Tesla and SpaceX CEO Elon Musk recently took a dig at Bitcoin enthusiasts and asked how many Bitcoin maximalists are needed to screw in a light bulb. 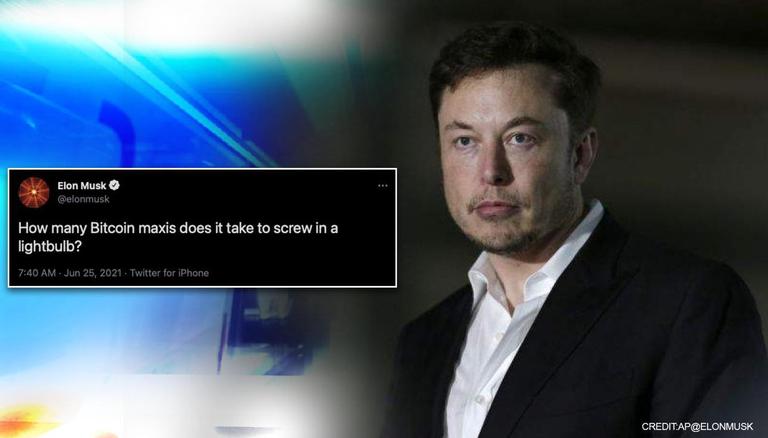 
Tesla and SpaceX CEO Elon Musk recently took a dig at Bitcoin enthusiasts and asked how many Bitcoin maximalists are needed to screw in a light bulb. Musk's influence on the crypto market is not unknown and in the past, his tweets have rolled the prices of the leading cryptocurrency. In May, after announcing that Tesla would no longer accept Bitcoin for their purchases, Bitcoin fell more than 10 per cent. Musk later, however, reversed his stance on the issue saying that his company would resume Bitcoin transactions when miners who verify transactions use more renewable energy.

Now, on Friday, Musk posted a snide tweet about Bitcoin maxis - slang for Bitcoin enthusiasts, who believe that the world’s largest cryptocurrency is the only digital asset that will be needed in the future. While using the classic “how many (insert person or thing) does it take to fix a lightbulb" joke, he tweeted, “How many Bitcoin maxis does it take to screw in a lightbulb?". Musk then even backed up with his own reply. Check it out,

Following Musk’s tweet, the price of the cryptocurrency, however, surged past the $35,000-mark. Bitcoin rose nearly nine per cent on a day, to $35,233 on June 25 on coinmarketcap.com Index. Bitcoin price dropped below $30,000 for the first time this week since January.

Meanwhile, several crypto investors criticised the Tesla CEO for making comments against Bitcoin that triggered a downward spiral in the valuation of the world's largest digital currency. First, Tesla suspended payments in Bitcoin over climate concerns and then later Musk tweeted that implied in a Twitter exchange that the electric carmaker has sold or may sell part of its Bitcoin holdings. However, in a separate tweet, Musk clarified that Tesla has not sold any Bitcoin, but at this moment, the cryptocurrency was already trading at one of its lowest values.