Who Is John McAfee's Wife? Here's Everything You Need To Know About Janice Dyson

After news about John McAfee's death was released in the public, many questions about his wife were asked. Read on to know who is John McAfee's wife. 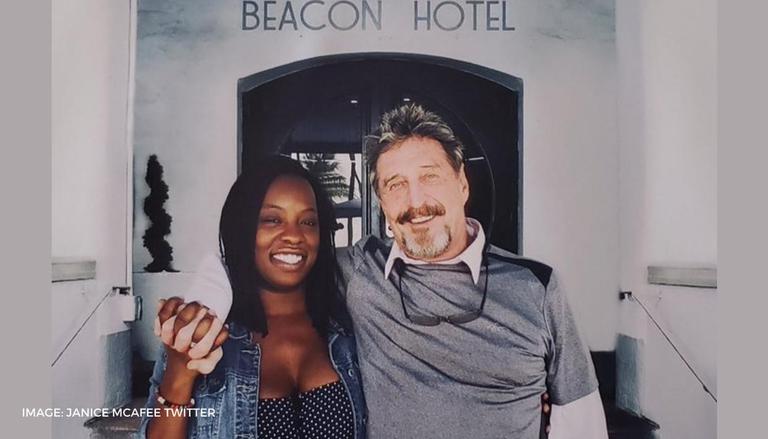 
After news reports of John McAfee's death surfaced on the internet, many people have been asking a lot of questions about his personal life, including his wife and children. John McAfee's wife's name is Janice Dyson. McAfee and Dyson have been married since 2013. Read on to know more about who is John McAfee's wife.

Who is John McAfee's wife?

As per an article by Heavy.com, John McAfee and wife Janice McAfee have been married since 2013. Janice and John met in 2012 when John hired her as a prostitute and paid for her services. Janice revealed in an interview that she had to pass on information about McAfee to a 'criminal underlord' during the first few years of their marriage. Janice said in the interview that she was forced to provide information about John's whereabouts and was told to hide poison in his food by her criminal connections. Janice also revealed that she was scared to disobey the criminals at first and didn't tell McAfee what was going on. Eventually, John McAfee figured out what was going on and the couple left to live on a luxury yacht to avoid arrest and criminal elements, McAfee revealed in the same interview.

Janice McAfee reportedly told a news channel that John had saved her from a life of human trafficking and allowed her to reconnect with her son. In a Tweet that Janice McAfee shared in 2020 she wrote that, ''@officialmcafee & I met 8yrs ago today. It feels like we’ve lived a dozen lifetimes since then. I don’t recognize the girl I was when first we met but I love the woman I’m becoming. John’s imprisonment is the longest we’ve been apart but I’ll continue to fight for his freedom.❤”

.@officialmcafee & I met 8yrs ago today. It feels like we've lived a dozen lifetimes since then. I don't recognize the girl I was when first we met but I love the woman I'm becoming. John's imprisonment is the longest we've been apart but I'll continue to fight for his freedom.❤ pic.twitter.com/TcQsYsaygn

On June 20, Janice McAfee tweeted a Happy Father's Day message to John McAfee while he was in jail in Spain. In the message, she said that McAfee was loved and appreciated. She said in her message that John was a polarising individual but he was always honest about himself. She also added, “Now the US authorities are determined to have John die in prison to make an example of him speaking out against the corruption within their government agencies. The media continues to vilify him, per their narrative, and there is no hope of him ever having a fair trial in America because there is no longer any justice in America.''

READ | Why was John McAfee in jail? The reason behind his stint in Spanish prison revealed

Happy Father's Day @officialmcafee. Though you are spending the day in prison know that you are loved and appreciated. #FreeJohnMcAfee #FreeMcAfee pic.twitter.com/YFmB36KWfb

Her tweets about the US authorities' intentions to have John McAfee die in prison have also fueled a few conspiracy theories regarding the nature of his death. On June 23, the Spanish authorities approved the US government's request to extradie McAfee to America. A few hours later, McAfee was found dead in the Spanish prison where he was being held.