Wally Funk, oldest person bound for space in Bezos' Blue Origin said, "None of us is nervous. I was never the ‘girl’ girl. I have waited a long time for this." 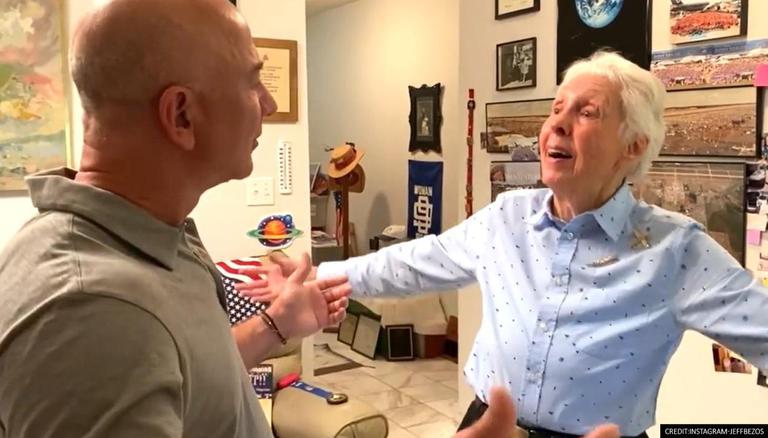 
The oldest person bound for space, 82-year-old Wally Funk would also accompany Amazon founder Jeff Bezos to fly to the edge of space along with two others in Blue Origin’s New Shepard. In a video chat with CBS, ahead of the historic takeoff on July 20 sitting alongside the crewmates, Wally said, “None of us is nervous. I just love the outdoors, and all things that come with it. I was never the ‘girl’ girl. I have waited a long time for this.” Notably, Wally had to wait for over half a century for the Tuesday trip and was not chosen to fly to space in 1960 due to her gender.

Wally was part of Mercury 13, a group of American women who underwent the physiological tests that astronauts selected by NASA did. Earlier this month, CNN had reported about Wally, at one time, was the youngest woman to graduate from that program. During a promotional video about her participating in the Blue Origin flight, the 82-year-old said that she “had done better and completed the work faster than any of the guys.” previously, she has also spent 10 hours and 35 minutes inside a sensory deprivation tank in one Mercury 13 test.

Amazon's Founder Jeff Bezos said that he, along with other three members of Blue Origin’s all-civilian crew, was 'incredibly excited' a day ahead of the historic flight into space on Tuesday. The American billionaire told the ‘Today’ show on July 19, “I can't wait to see what it's going to be like. People who go into space say that they come back changed...I can't wait to see what it's going to do to me." He also took to Instagram to post about the preparation that the four-member crew has been doing ahead of the July 20 mission. Sharing the glimpses, Amazon founder wrote, “We’ve been practising full missions in New Shepard’s training simulator. Can’t wait for liftoff.”

New Shepard is a 60-foot-tall, or 18.3-meter-long, fully autonomous rocket-and-capsule combo developed by Bezos’ Blue Origin. The July 20 flight marks a major milestone in the space tourism industry, and ahead of the historic mission, Bezos did a round of television interviews before the launch scheduled for 8 AM CDT (1300 GMT) around 20 miles (32 km) outside the rural Texas town of Van Horn.

American Billionaire Jeff Bezos and his brother Mark Bezos will be joined in the all-civilian crew by an 82-year-old pioneering female aviator Wally Funk and 18-year-old Oliver Daemen. The youngest person bound for space is a recent high school graduate set to attend the University of Utrecht in the Netherlands to study physics and innovation management in September. Blue Origin had announced earlier this month that Daeman is the company’s first paying customer and his father heads investment management firm Somerset Capital Partners.

READ | Ahead of Blue Origin sapaceflight, Bezos tells crew to 'sit back, relax & absorb the view'

A total of four passengers will be taken beyond the Karman Line, which is around 100 kilometres above Earth where they will be able to witness the Earth before landing back on the blue planet. The first space tourists being sent by Blue Origin are reportedly engaged in final preparations for the flight including safety briefings and a simulation of the spaceflight, review of the rocket along with its other operations. Blue Origin said in a statement, “The training will help you feel comfortable and prepared for spaceflight and your responsibilities as an astronaut.”