Alien Base In Calgary, Canada? Conspiracy Theorists Seem To Be Convinced

Alien base in Calgary, Canada? Has been a question for may interested people who saw the orange UFOs hovering around in the city. Read more details.

The UFO videos that are making the rounds on the internet after Pentagon's surprise acknowledgement on their existence is evidently a sight to behold. People around the world can be seen posting videos about UFO sightings, while some of them look simply fabricated, others often leave people in certain distress. Recently, a video of a Goodyear blimp was confused to be a UFO by people int he New Jersey, but another recent video where an orange disc ould be seen hovering around in the Vatican city during day time was deemed to be legitimate. However, conspiracy theorists have taken it a notch further this time and claimed that an alien base is actually located in Calgary, Canada.

Alien base in Canada?

A YouTube channel named 'UFO Sightings Daily' recently posted a video where two orange coloured flying objects could be seen hovering around. The description and the video are posted below. The video was apparently filmed at 1:15 AM in the night and the flying objects are not clear. Check it out below -

At 1:15am my wife and I witnessed a bank of lights in the NE sky from our bedroom. The lights were in a shape of a bow or boomerang. They were hovering under the clouds about 30 km from my location . The lights started to change shape , grouping together and fazing out . They would return a few minutes later and do similar actions for a fed more minutes. Total duration was 15-17 minutes. We took multiple video and pictures.

One of the most known alien hunters by the name Scott C Warring has now seen the video and claimed that the objects flying are a proof that the aliens have a base in Canada, beneath the city of Calgary. The UFOlogists claims that the object can be seen changing shapes. Scott, who runs the UFO sightings daily website and YouTube channel has gone on the public record and claimed that the video doing rounds on the internet is 100% proof of the existence of aliens. Scott, on his website, has previously shared a number of videos and articles of UFO and alien life sightings all around the globe. Scott gave wrote this on his website titled UFO Sightings Daily. Check it out below - 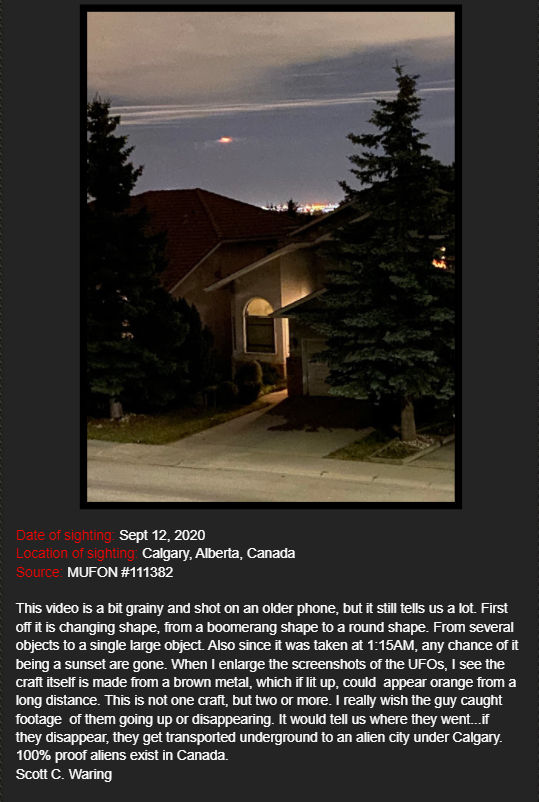