Battle For Crown: Indian Ants Can Shrink Their Brain Size And Re-grow It To Become Queen

Usually in an ant family, there is one queen who is the only reproductive member of the clan. A new study has revealed that few ants can alter the size of brain


Usually in an ant family, there is one queen who is the only reproductive member of the clan. However, a new study has revealed that few ants can alter the size of their brain. Also, they can even reshape their brains back to their original size. The Indian jumping species can go through numerous intense physiological changes to redevelop the ability to reproduce. These species shrink their own brains by 25 per cent, minimize their venom sacs, and also expand their ovaries while increasing their oocytes seven-fold.

Published in the journal Proceedings of the Royal Society B, the study reveals that these species are called “gamergates”. As a part of the study, the scientists picked up two gamergates in each of 30 Indian jumping ant colonies. These two were reared in the lab. Then, the scientists left one gamergate ant as it was. They reverted the other back to worker status through solitary isolation. After this, the reverted gamergates were added back to their colonies. The behavioral and physiological changes between the pairs were then observed and compared.

It was then concluded that the isolated gamergate ants were able to revert back to worker physiology in a time span of 6-8 weeks. Also, their brains, venom sacs, and ovaries re-morphed to match their worker peer. As per the study, being a gamergate likely requires brain shrinkage. This is because this way the ants are able to divert additional resources to egg production. Also, the brain tissue is metabolically expensive to maintain. 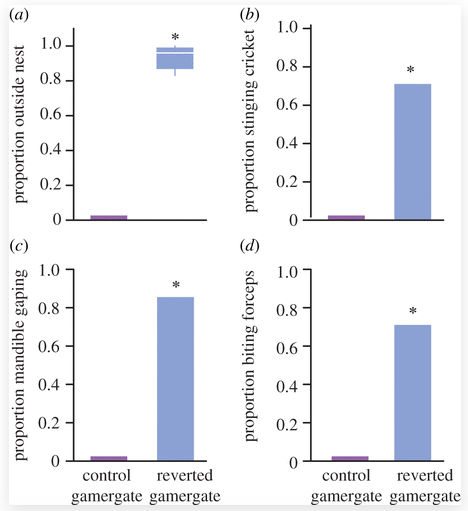 (Changes in behaviour. (a) Proportion of observations (median, 25–75%, and non-outlier range) when control and reverted gamergates were in the foraging arena outside the nest. (b) Proportion of control and reverted gamergates that stung and subdued a cricket, (c) opened their mandibles when provoked with forceps, and (d) bit and stung forceps when provoked. Image Credits: RoyalSocietyPublishing.org)

(Changes in internal anatomy. (a) Number of yolky oocytes present in the ovaries and (b) venom sac volume of control gamergates, reverted gamergates, inside workers, and foragers (median, 25–75%, and non-outlier range). Letters indicate significant differences between roles. Image Credits: RoyalSocietyPublishing.org)