While India awaits Chandrayaan 2's Vikram Lander to soft-land on the south pole of the Moon on September 7, the hero of the next part of the mission is Pragyan

While India awaits Chandrayaan 2's 'Vikram Lander' to soft-land on the south pole of the Moon on September 7, the hero of the next part of the mission is the 'Pragyan' rover. Pragyan- which translates to wisdom in Sanskrit is the ultimate part of Chandrayaan 2 mission which will explore the lunar surface. Pragyan which will emerge from Vikram on landing on the moon and will study variations in lunar surface composition and to trace back the moon's origins. Pragyan is set roam the south pole on the lunar surface to test the possibility of the presence of water.

As explained by ISRO, Pragyan is a six-wheeled robotic vehicle i.e rover carrying two payloads. With a 50W power generation capacity, Pragyan can travel upto 500m before it loses power. Pragyan, which weighs 27kg can only communicate with the Lander - Vikram. After Chandrayaan-1 provided evidence of water molecules on the moon, Pragyan will study the extent of water molecule distribution on the surface, below the surface and in the exosphere. 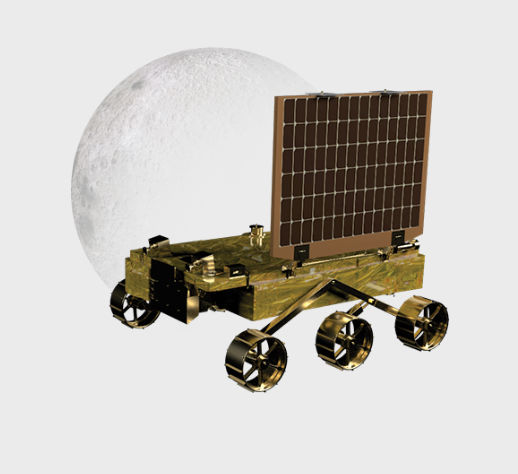 What will Pragyan do?

On September 7 at 1:40 AM, Vikram will begin its powered descent to the lunar surface, as shared by ISRO. After ISRO's 'fifteen minutes of terror',  Vikram will land near the lunar south pole, 71 degrees to the south of the equator and 22.8 degrees east. Two hours after Vikram lands, the hatch will be opened and a ramp will descend, allowing Pragyan to roll out. The six-wheeled, solar-powered Pragyan will explore the lunar surface around 500m at a time, sending its results to Vikram.

How will Pragyan explore the moon?

APXS: Its primary objective to determine the elemental composition of the Moon's surface near the landing site, according to ISRO. Using  X-ray fluorescence spectroscopy technique, in which X-rays or Alpha particles are used to excite the target surface, APXS will explore the lunar surface. Through the use of radioactive Curium (244)- which emits Alpha particles and X-Rays, APXS can detect all major rock-forming elements such as Sodium, Magnesium, Aluminium, Silica, Calcium, Titanium, Iron and some trace elements such as Strontium, Yttrium and Zirconium. This will help ISRO to trace back the origin and evolution of the Moon.

LIBS: It aims to identify and determine the abundance of elements near the landing site, according to ISRO. LIBS will achieve this by firing high-powered laser pulses at various locations. This is enable to analyse the radiation emitted by the decaying plasma. Through these tests, it will enhance lunar materials study giving a clearer picture of the Moon's properties.

Chandrayaan-2's rocket lifted off at the scheduled time of 2:43 PM on July 22. The average distance between the Earth and the Moon is 3, 84, 000 km. Vikram lander will land on Moon on the 48th day of the mission on September 7. This moon-lander and rover mission proves that India is taking lead in space exploration as its mission aims to investigate the unexplored south pole of the moon. With Chandrayaan-2 India aims at the soft landing on the Moon. If successful, it will be the fourth country after the US, Russia, and China to do so.