In a rare discovery, astronomers have found a distant rotating disk galaxy ever observed, known as the Wolfe Disk after the late astronomer Arthur M. Wolfe, spinning at 170 miles (272 kilometers) per second similar to our Milky Way. In a report published on May 20, in the scientific journal Nature, and the UC Santa Cruz official website, an international team of astronomers found a massive rotating disk galaxy that existed when the universe was only ten per cent of its current age, which now challenges the traditional models of galaxy formation.

Discovered with Atacama Large Millimeter/submillimeter Array (ALMA), rotating galaxy DLA0817g now challenges many galaxy formation simulations, which predict that massive galaxies in the evolution of the cosmos grew through mergers of smaller galaxies and hot clumps of gas.

Its properties are astonishingly similar to our own galaxy, despite being only 1.5 billion years old,  coauthor J. Xavier Prochaska, professor of astronomy and astrophysics at UC Santa Cruz said in UC’s research report.

Read: Scientists Postulate Detecting Parallel Universe 'next To Ours' Where Time Runs In Reverse

Read: Scientists Name New Fungus Species After Twitter Where It Was Discovered

Another lead author, Marcel Neeleman, Max Planck Institute for Astronomy in Heidelberg, Germany, was quoted saying that while previous studies hinted at the existence of these early rotating gas-rich disk galaxies, thanks to ALMA astronomers now have the unambiguous evidence that they occur as early as 1.5 billion years after the Big Bang.

We think the Wolfe Disk has grown primarily through the steady accretion of cold gas, UC’s astronomer Prochaska said in the report. Still, one of the questions that remains is how to assemble such a large gas mass while maintaining a relatively stable, rotating disk, he added. 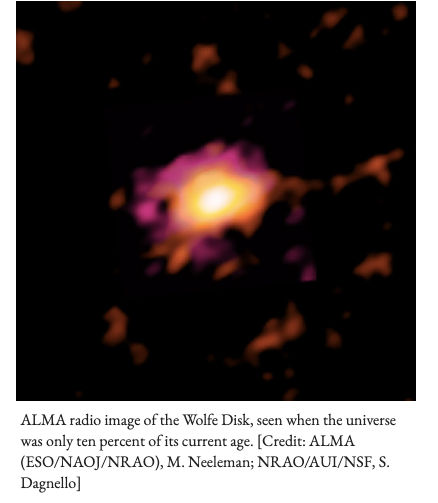 Further, adding to Prochaska’s point, Neelam explained that most galaxies that were found early in the universe looked like train wrecks because they underwent constant and often violent merging. And hence, these hot mergers make it difficult to form well-ordered, cold, rotating disks as we observe in our present universe. And that makes it a unique finding, he added.

As per the report, the team also used the National Science Foundation’s Karl G. Jansky Very Large Array (VLA) and the NASA/ESA Hubble Space Telescope to learn more about the formation of the stars in the Wolfe Disk. The star formation rate in the Wolfe Disk was at least ten times higher than in the Milky Way galaxy, which proves that it must be one of the most productive disk galaxies in the early universe, Prochaska was quoted saying in the report.