Lunar Eclipse 2021: What Is Super Flower Blood Moon? Everything You Need To Know

“You may be able to observe first part of eclipse as the Moon just starts to darken, the Moon will be near or on the horizon," NASA said about Blood Moon 2021. 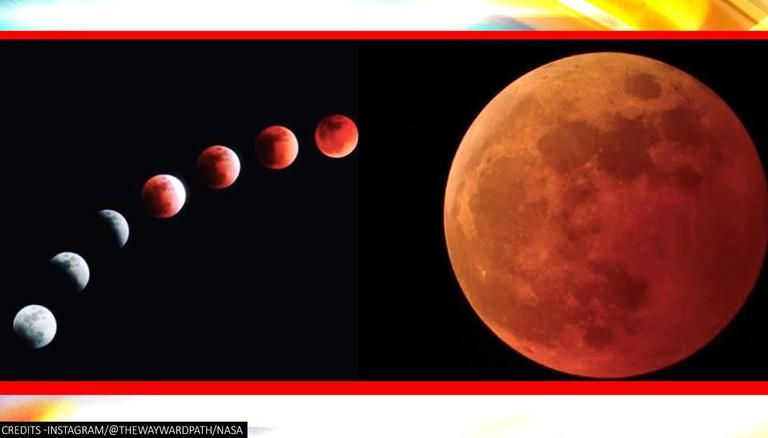 
The cosmic second supermoon of 2021 will rise next week on May 26 causing a total lunar eclipse. It would be the second of three supermoons witnessed this year. Also known as the “Full Flower Moon”, due to the springtime flowers in the Northern Hemisphere this time of the year, the moon will grace the night sky as Earth positions itself directly between the sun and the lunar body, blocking the moon from reflecting sunlight.

Skywatchers around the globe will be able to witness this event, given the clear weather conditions. Here’s how you can watch the spectacular phenomenon. According to NASA, on May 26, “Moon will pass through Earth's shadow, causing it to darken and usually become reddish in colour. The red colour comes from sunlight filtering through Earth's atmosphere, a ring of light created by all the sunrises and sunsets happening around our planet at that time.” Because of the moon’s reddish shade, the  lunar eclipse is often called a "blood moon."

How, where to watch ‘Full Flower Moon’

According to NASA, the best viewing for this eclipse is in the Pacific Rim. This includes countries in the western parts of the Americas, Australia and New Zealand, and Eastern Asia. In India, one can see check Timeanddate.com's viewing guide to dial in the time for a location across any state and to know how much eclipse will be visible and the best angle to watch it. The Blood moon or the full flower moon will be clearly visible from the naked eye in Hawaii, Alaska, and the western states of the US. Timeanddate.com will also start the global streaming event in partnership with astronomers in Australia, Hawaii, California, and Arizona at 2:30 am PT. For the eastern side of the US, the eclipse will become visible only around the twilight of the dawn. In fact, as per NASA,  “It's safe to view lunar eclipses with your eyes.” So one can watch the moon with the naked eye. And unlike solar eclipses, which tend to have a narrower viewing path, “lunar eclipses are at least partly visible anywhere on the planet's night side” which make the visibility easier. The event occurs at 7:14 am  EDT Wednesday. (The first supermoon of the year was on April 26.) The Moon will appear full from Monday evening through Thursday morning.

“You may be able to observe the first part of the eclipse as the Moon just starts to darken, but the Moon will be near or on the horizon as Earth’s shadow begins to cover it,” NASA stated in a release. 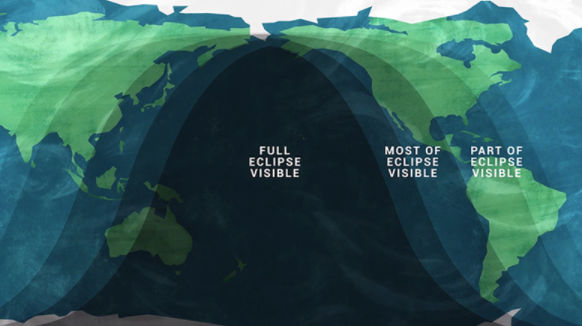 [This map shows the global visibility of the May 2021 lunar eclipse. Credit: NASA/JPL-Caltech.]

How long the event will last; virtual streaming

According to NASA, the entire eclipse will last about five hours, from 08:47:39 UTC (Coordinated Universal Time) to 13:49:41 UTC. The peak when the Moon is also near its closest point to Earth in its orbit, often called a “supermoon” will happen at 11:19:52 UTC and will last for about 14 minutes. NASA’s Virtual Telescope Project will Livestream the event starting at 3 a.m. PT on May 26. Those who aren’t able to watch the occurrence can see it online. 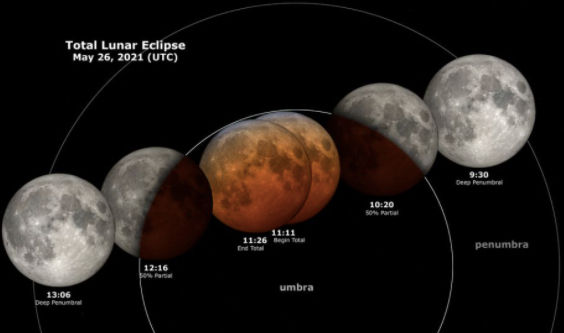