The upcoming launch of NASA’s SpaceX Crew-1 mission which aimed at sending four astronauts to the International Space Station has now been postponed to mid-November, announced the agency officials on October 11. This decision has been taken so that SpaceX gets enough time for completing hardware testing and data reviews. In an update, NASA wrote, “Through the agency’s Commercial Crew and Launch Services Programs partnership with SpaceX, NASA has full insight into the company’s launch and testing data”.

Read: SpaceX Starman Makes It To Mars For First Time, Comes As Close As 5 Mn Miles 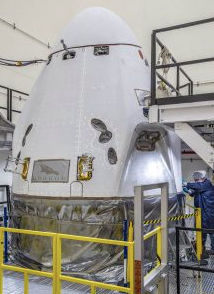 The associate administrator of NASA’s Human Exploration and Operations Mission Directorate, Kathy Lueders said, “We have a strong working relationship with our SpaceX partner. With the high cadence of missions SpaceX performs, it really gives us incredible insight into this commercial system and helps us make informed decisions about the status of our missions. The teams are actively working this finding on the engines, and we should be a lot smarter within the coming week”.

After the launch, Crew Dragon spacecraft, named Resilience by the Crew-1 astronauts will perform various operations ‘culminating with rendezvous and docking with the International Space Station’. As per NASA, this will mark the Crew-1 astronauts’ integration with the Expedition 64 astronauts Kate Rubins, and Expedition 64 commander Sergey Ryzhikov and flight engineer Sergey Kud-Sverchkov. At the end, Crew Dragon is expected to autonomously undock with the four astronauts on board, depart the space station and then re-enter the Earth’s atmosphere. The update read, “The Crew-1 mission is a major step for NASA’s Commercial Crew Program. Operational, long duration commercial crew rotation missions will enable NASA to continue the important research and technology investigations taking place onboard the station”.