The NASA Perseverance rover is now investigating an unusual layered rock in the Jezero Crater at Mars and has created the newest visual marvel. 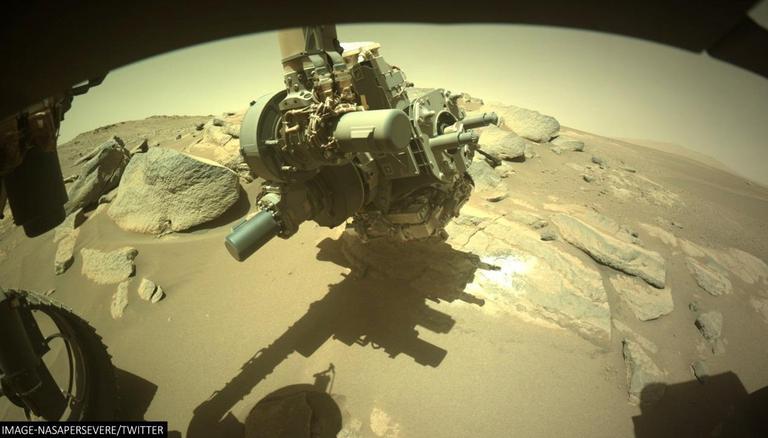 
NASA's Perseverance rover is now investigating an unusual layered rock in the Jezero Crater and has created the newest visual marvel. The rover roughed up the surface of the rock with an abrading tool on the end of its robotic arm in order to determine whether it was worth extracting a sample from it. After chiselling away at the rocks, the rover returned photographs that revealed what lay behind the rusty top layer: a slew of granular minerals and sediments.

"Peering inside to look at something no one's ever seen. I've abraded a small patch of this rock to remove the surface layer and get a look underneath," the rover team tweeted on Tuesday. "Zeroing in on my next target for sampling Mars."

Peering inside to look at something no one’s ever seen. I’ve abraded a small patch of this rock to remove the surface layer and get a look underneath. Zeroing in on my next target for #SamplingMars.

Since the 1970s, NASA has been landing robots on Mars, but each mission yields new images and data. Perseverance is giving people something unusual when it scratches the surface of a rock that may relate to Mars' history of water. It's a peek into previously unknown territory. A closeup of the abraded spot on the rock caught the attention of Mars aficionados on Twitter. A small white triangle can be seen if you zoom in. Because there are other whitish specks strewn over the circle, the triangular piece is most likely just a random piece of rock. Sampling is an important aspect of the rover's job.

READ | NASA begins preparations to retrieve rock samples from Mars; Take a loot at the plan

Nasa Rover missions currently on and in the works

NASA is planning a mission to Mars in the future to gather materials retrieved by Perseverance and return them to Earth. The project is still in the works, but it could result in some new Mars samples being available for research by the early 2030s. NASA is making strategic selections regarding which rocks to collect because the rover has 43 sample tubes in all. Abrading the stratified rock's surface aids the team in determining whether it is worthy of a sample. Perseverance has been exploring certain rock outcrops in the planet's South Sétah region since October 25, which are of interest to Perseverance's scientists' team on Earth. The rover's robotic arm features an abrading tool that can scrape away at rock layers to see within these rocks. Perseverance may soon be breaking out its sample gear if the rock continues to beckon. That never-before-seen rock could end up in a lab on Earth eventually.

"Layered rocks like this often form in water, and can hold clues about what their environment used to be like," the rover team tweeted last week.

Get a load of these layers! I’m getting out my abrading tool to take a look inside.

Layered rocks like this often form in water, and can hold clues about what their environment used to be like. Let’s see if this would be another good place for #SamplingMars. pic.twitter.com/2CYc4xF6nq

Mars 2020 is a rover mission for Mars that is part of NASA's Mars Exploration Program, which also includes the Perseverance rover and the Ingenuity small robotic coaxial helicopter. Perseverance and Ingenuity have been on Mars for 262 sols as of November 15, 2021. (270 total days). Perseverance studies the environment on Mars as well as the planet's surface geological processes and history, with a focus on previous habitability, the likelihood of past life on Mars, and the potential for biosignatures to be preserved within accessible geological elements. Along the way, it stores sample containers for retrieval by a future Mars sample-return mission.

READ | Rocket fuel from scratch: Here's how scientists plan to exploit microbes in Mars for fuel

I’m back to work, parked between these two beautiful outcrops. Been doing some imaging, weather studies, chemistry experiments and getting a software update too.

WE RECOMMEND
NASA releases incredible video on Venus-bound DAVINCI mission; Watch
NASA shares incredible throwback image of India glowing during Diwali
NASA’s got a Nebula size challenge for stargazers on social media; Astrophiles accept
NASA to send 'Snoopy' to the Moon in an uncrewed Artemis I mission
NASA's Crew-3 astronauts to conduct their first spacewalk on Nov 30; Here's how to watch
Listen to the latest songs, only on JioSaavn.com